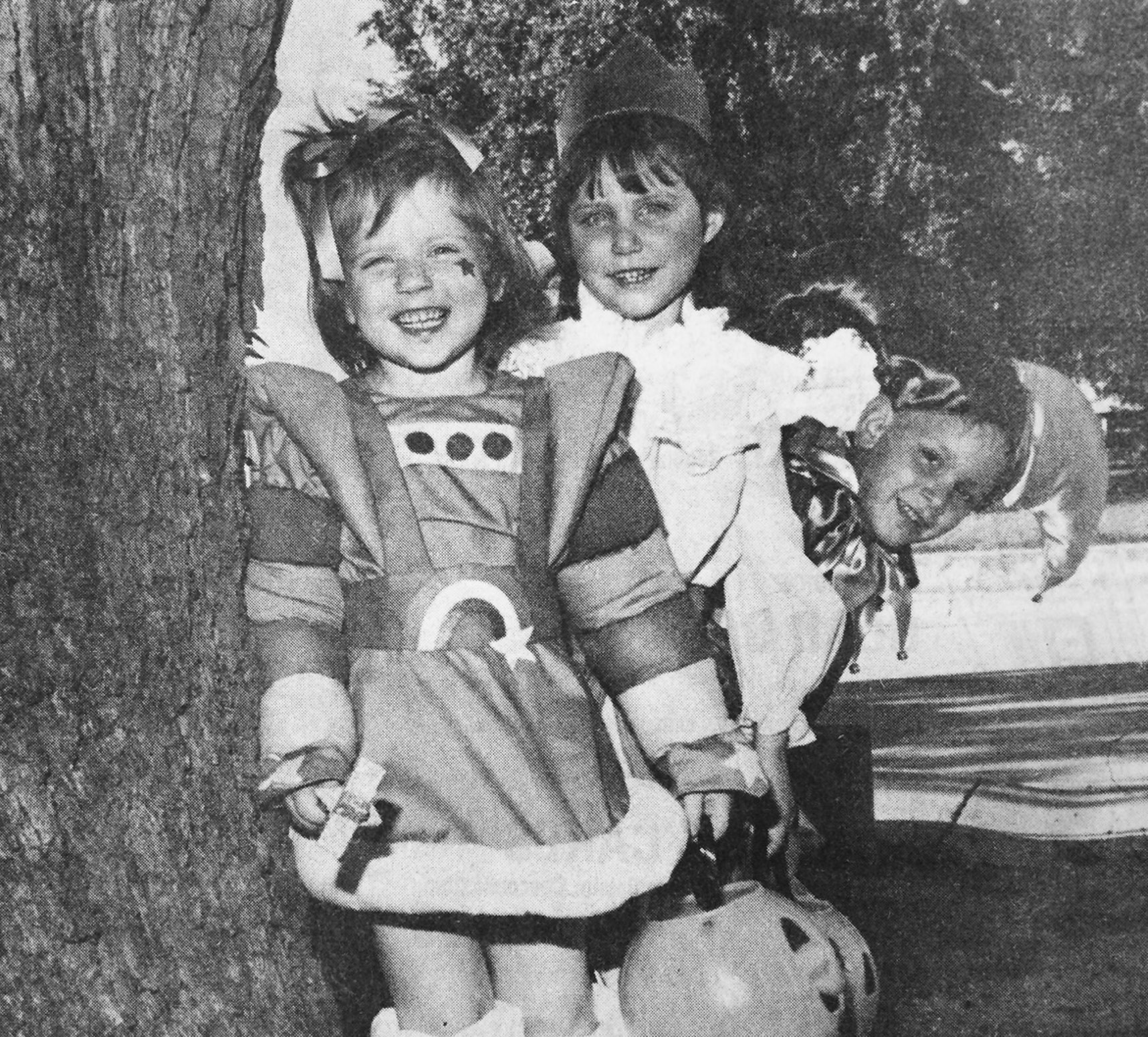 Ready for Halloween-The Zimmermans, Jennifer (Rainbow Brite), Stephanie (Fairy Godmother) and Justin (Jester) are all ready to join the other children around the Brush Country at the United Way Halloween Carnival to be held at St. Andrew’s Hall from 6 until 10 p.m. Thursday night. Fun for all, with free admission and everyone is invited to attend. Express photo originally ran in the October 30, 1985 edition of the Pleasanton Express.

Rights-of-way deeds on a four or five mile stretch of road from Verdi to the Leming-Loire road will be ready the last of this week, County Commissioner Daylon James said Monday. He said he would start fencing as soon as he obtains the deeds.

A heater being used to melt tar for roofing caught fire yesterday (Wednesday) morning at the Oak Ridge subdivision and imperiled the new home being built for Mr. and Mrs. P.C. Wheeler. Clydell Haverlah said the tar became overheated, a pop-off valve kicked off, spraying out tar that was ignited. The burner was only a few feet from the house at the time. The Pleasanton fire department had its troubles getting to the fire and members of the Smelley Construction Co., throwing sand on the blazing tar, had the fire out before they arrived.

There’s an old saying: “The way to a man’s heart is through his stomach.” This being true, members of the Birthday Club are firmly entrenched in the hearts of the Pleasanton volunteer firemen. For the 14th time, the Birthday clubbers have hosted firemen at an annual dinner. The latest occasion was Monday night at the First Methodist church annex when firemen and several guests devoured a ham dinner that did nothing to detract from the Birthday clubbers established reputation as cooks. Even so, the Birthday ladies weren’t satisfied. Mrs. Mabel Brite, who welcomed the firemen and who said, “You’ll be delighted to know that I’m not going to make a speech this year.”

Pleasanton Ex-Students association is sponsoring a Homecoming Dance after the Eagle-Gonzales football game Friday night. This special Scholarship Dance will be held at St. Andrews Pavilion, Friday, Oct. 31. John Donaho and the Country Sounds of Texas will provide the musical entertainment and all money earned will be applied to the worthwhile scholarship fund.

The Atascosa County Commissioners voted at a special meeting Friday, October 25, not to sign a multi-year contract with Garbage Gobbler for county garbage pickup outside incorporated areas of the county, but did agree they would continue to pay the Atascosa Landfill Board 25 cents per capita to provide service to the county. That agreement left the door open for Garbage Gobbler to proceed with an application for a permit to establish a garbage transfer site at the location of the present citizens collection center in Jourdanton.

The Jourdanton Chamber of Commerce is sponsoring The Allen Bros. Circus to be held at Jourdanton Little League Park. There will be two performances on Thursday, October 26. The first performance is at 5 p.m. and the second performance is at 7:30 p.m. Pre-sale tickets are available at Benz & Klumb, The Feed Pen, Jourdanton Public Library and The Hair Company. An adult purchased ticket of $6 will allow three free tickets for children. Tickets must be purchased the day prior to the day of the circus for the free tickets special, if not, tickets at the gate are $8 per adults and $6 for children.

The more you see Leroy Childs play football for the Pleasanton Eagles the more you wonder what else he can do. The big 215 pound senior tailback, who is nearing the end of his high school football career, hit 1,000 rushing yards for the third straight year in leading the Eagles to a 61-12 pounding of the Edgewood Red Raiders Friday before an estimated 1,000 fans at Edgewood Stadium.

Shortly after 8 p.m. Tuesday, October 18, the proprietor of The Little Fishing Hole convenience store in the 15000 block of Hwy. 173 in the Kyote community looked up to see a man enter the store. The man was wearing a dark colored ski mask and was armed with a pistol. The storekeeper described the man as being tall and thin. The proprietor said the man appeared ready to rob him of the money he had in the cash register, when the could-be robber seemed to panic and ran out of the store. The man then leaped into a twotone blue Ford pickup and roared away.

It has been a long time coming and with just two more wins, what all of the Poteet Aggies have been striving for will become a reality. Remaining unbeaten in District 28-3A, the Aggies (3-0) took care of Lytle on Friday 34-6 to stay on track towards their first district championship since 1958. “I really like this football team right now,” said head coach Eddie Gill. “We are playing with a lot of confidence and that makes a big difference in every game we play.”