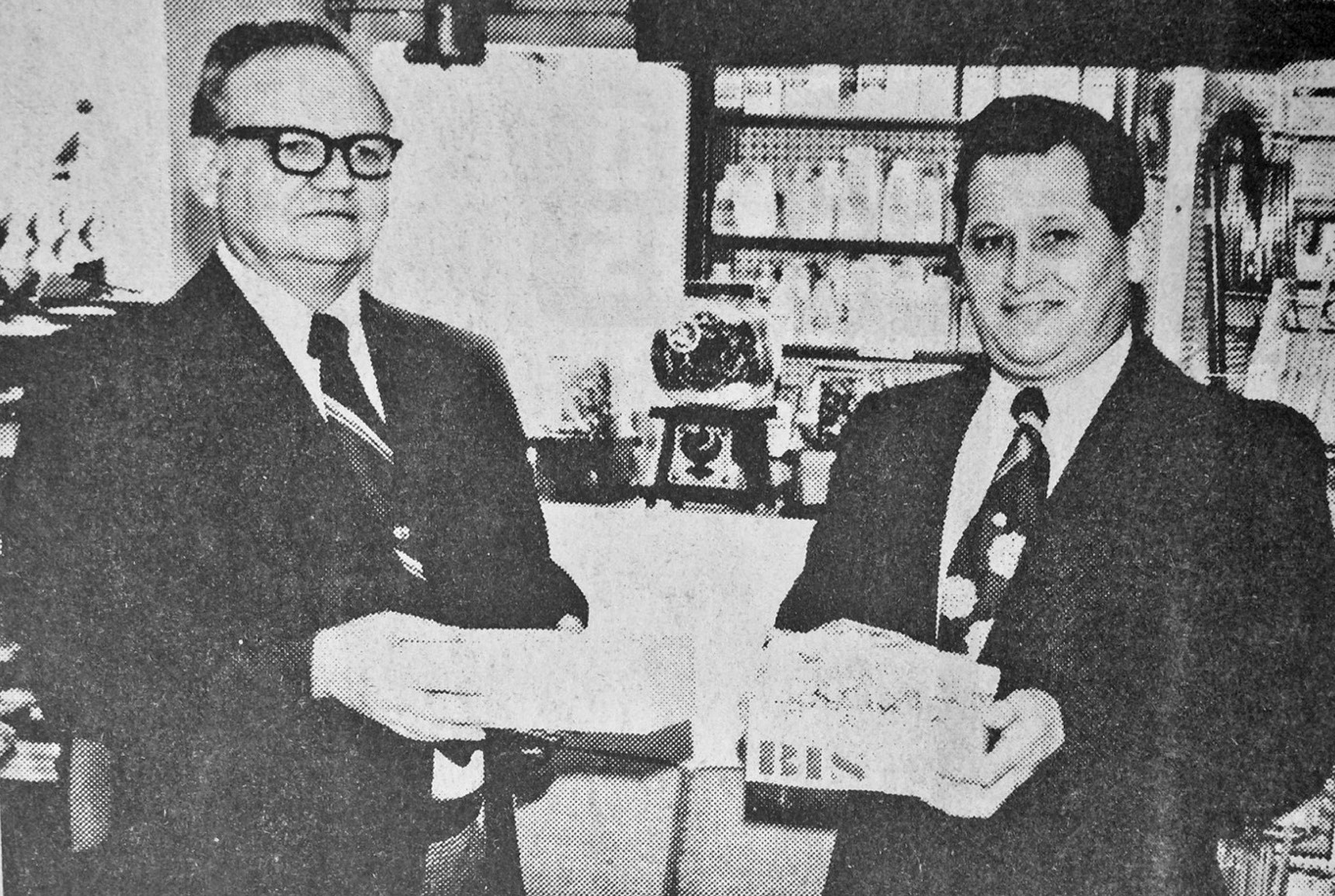 Candy for the children will be just one of the special treats Saturday, Dec. 13, as the Chamber of Commerce is again sponsoring the Christmas Tree Lighting Program in downtown Pleasanton. Raymond Dowdy, left, and Bryan Boyd are in charge of this year’s program, and it looks like an entertaining affair. It all begins at 5:30 p.m. Santa will be on hand to speak to the children and hand out candy; First Baptist Church Handbell Choir, under the direction of Pat Cox, will perform; Minister Don Norwood will read a Christmas message and Christmas carols by the Junior High and High School combined choir will be sung. Everyone is invited to come join the fun, Saturday at 5:30 p.m. Express photo originally ran in the December 10, 1975 edition of the Pleasanton Express.

The site for the proposed Mercy Hospital at Jourdanton was dedicated in a simple ceremony Saturday afternoon, at 5 o’clock. In making the dedication address, District Judge H.D. Barrow pointed out that the community had traveled a long, hard road to make the dedication possible. “It has taken the entire concerted and prayerful efforts of all the citizens of the area,” he declared.

A three-cornered business transaction has resulted in new owners for two and a filling station here in Pleasanton. Mr. and Mrs. D.R. Dixon have sold Dixon’s Café to Mrs. Alice Lane who is now operating the café. At the same time, Dixon made a sale of the Magnolia service station, formerly operated by Winton Nail, to M.E. Miller, Miller has sold Treat’s Drive Inn to E.B. Poth Jr. of North Pleasanton. Mr. and Mrs. Dixon plan to move back to San Antonio “Dick” said that his future plans are uncertain.

It is still unofficial, but it now appears likely that a 2500-seat concrete stadium will be built for Pleasanton High School. Final action probably will be taken when Pleasanton school trustees meet next Tuesday evening in regular session. Last week board members authorized Gene Edens, stadium engineer, to negotiate with James Cude, Pleasanton contractor and apparent low bidder on the project.

An historic landmark in Pleasanton is being torn down this week to make way for progress. The old Burmeister garage building on Main street is being razed. In its place will soon be constructed a modern 7,400 square foot building of masonry and glass to house the new home of Mrs. A.N. Burton’s Ben Franklin store. James Cude is contractor on the new building and will begin construction as soon as the site can be cleared. Mrs. Burton said the building will be modern in every way and completely air conditioned.

A citizen’s arrest made by Freddie Harris, an Atascosa-Bexar County sand company operator, and his daughter,

Beverly, corralled a quartet of Alamo City burglary suspects and held them for Deputy Sherriffs Aerl Jernigan and Jim Payne, Tuesday, after the four had fled from the scene of a crime they reportedly had just committed. A head on collision on Hwy 97, 8 miles east of Pleasanotn, caused considerable damage to the two vehicles involved, but luckily only minor injuries, according to Department of Public Safety Highway patrolman, Ronnie Lawson. Lawson, who investigated the accident at 3 a.m. Dec. 6 stated that a 1972 Cadillac was struck head on by a 1975 Mercury. The driver of the Cadillac apparently went to sleep and crossed over the center stripe enroute to his home in Floresville.

The Atascosa County Commissioners Court was addressed by a group of about 15 residents from the La Parita area complaining about their roads during the court’s Monday morning, De. 9 meeting. The residents presented the court with a petition signed by 44 residents of the area saying that something needed to be done about the roads. Spokesman for the group was A.J. DiCaro. The group said it was not pointing a finger at anyone in particular but the roads are in bad shape, need to be shredded and a bridge on La Parita Creek is also bad off.

Santa shared honors with the children of Poteet on Saturday during the Children’s Christmas Parade sponsored by the Poteet Chamber of Commerce. Enthusiastic viewers lined Ave. H to cheer the parade participants, then followed Santa to St. Philips Church for lunch and pictures.

The speed limit will rise to 70 mph on some of Texas highways as the state takes advantage of the elimination of the 55- mph federal speed limit, which has been in effect for more than 20 years. Back to the ‘good old days.’ Not exactly! And, not as soon as you might think. According to local TxDOT resident engineer Gene Clement, getting the supplies to make the necessary speed limit changes has become somewhat of an obstacle. Every region of the state is clamoring for signs, paste-over signs, pipes, breakway plates (for safety) and other items.

Following an accident that sent a pickup into a stock tank filled with water, an electric company line worker crew dashed to the rescue of two victims Thursday, Dec. 1. The accident occurred on FM-791 six miles east of Campbellton. DPS Troopers Denny Bowen and Valerie Galvan investigated the accident which occurred around 4 p.m. The vehicle was traveling west on the rural highway when they slowed to make a left turn into property at 24456 FM-791 when a large truck hauling corn struck the pickup from behind. The impact caused the pickup to cross the two-lane road and crash through a fence a few feet past the property entrance gate. The truck continued from the fence into a stock watering tank and began sinking.