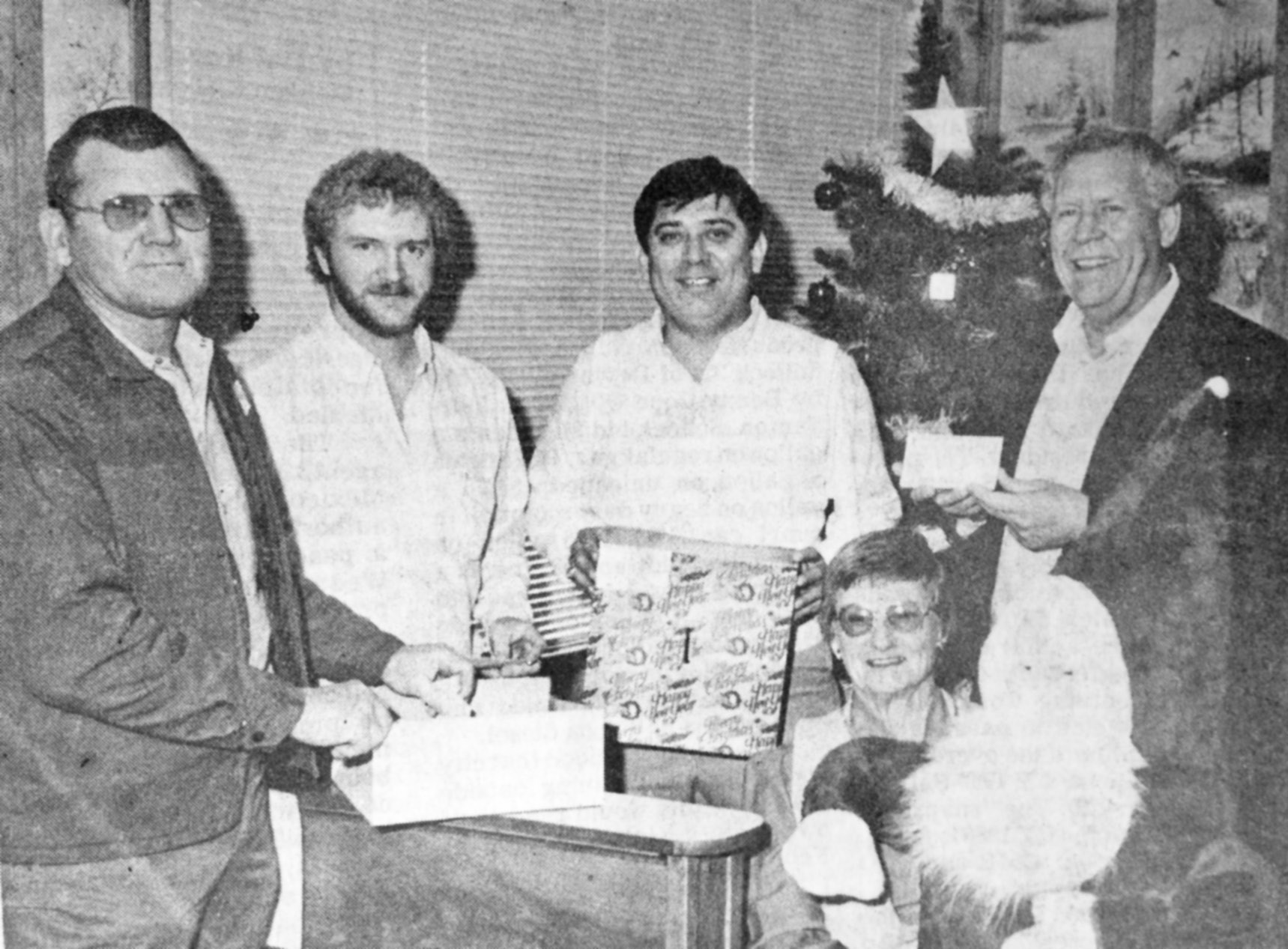 ROBBIE HAMBY, delves into the Pleasanton Express shelves for news of the past. She may be reached at: rhamby@pleasantonexpress.com. Ready to draw-The Jourdanton Chamber of Commerce and Auxiliary are getting ready for their Christmas Shopping Spree, December 20, and will give away five $100 gift certificates. Digging their hands into the box of names are, left to right standing, Chamber and Auxiliary officers Tinker Shearrer, Larry Boubel, Johnny Lambaria and Danny Matocha. Seated holding Santa is Rita Vyvlecka. Express photo originally ran in the December 18, 1985 edition of the Pleasanton Express.

Final plans won’t be complete until early next fall for converting Hwy. 281 into a four-lane expressway from Pleasanton to the Bexar county line, Ernest Wehman told Chamber of Commerce directors here Monday. Wehman is chairman of a special Hwy. 281 committee representing Pleasanton and North Pleasanton. Meantime it was announced that bids probably will be let next February for widening and improving 8.4 miles of Hwy. 281 from Pleasanton south. This stretch of improvement will link with work already done north of Campbellton.

Approval of a $47,763 grant to the Jourdanton schools, under the new Title I program, has been announced by Supt. William J. Brown. He said that the schools hope to begin the program some time next month and that 12 to 14 extra persons will be employed. Included will be six to eight teachers, four teachers’ aids, one part-time nurse and one librarian.

Mayor Richard Wehman conferred with school trustees last night on safer school crossings for school children. The mayor noted that he and other city council members have received complaints concerning hazards faced by school youngsters. He noted that two small children narrowly escaped being run over while crossing Hwy. 281 recently. The mayor proposed that the city-school employ special safety patrolmen to work the Main Street crossings and the Hwy. 281 crossing on a 50-50 basis.

It can now be announced that the site location of the San Miguel Lignite coal fired generating plantformerly known as the G&T Cooperative Project in Atascosa and McMullen counties has been definitely selected according to word received from Riggs Shepperd, general manager of the South Texas Electric Cooperative, Inc., headquartered in Victoria, co-partner in the joint venture with the Brazos Electric Power Cooperative Inc. whose home base is in Waco. The plant will be located on the Alonzo Peeler Ranch, in Atascosa County, approximately 16 miles south of Christine and about 50 miles due south of San Antonio.

Pleasanton Public Library is one of the eighteen libraries in the 21-county area served by the San Antonio Area Library System which qualified for system membership for the fiscal year that began September 1. It is among 247 libraries that have qualified for membership in ten Texas systems. A total of 86 percent of all Texans are served by these system member libraries. As members, they are participating in activities to improve public library service in the region.

Atascosa County Sheriff Tommy Williams, Assistant Chief Deputy Sheriff David Soward and Texas Ranger Joe Peters have launched an intensive murder investigation into the death of an as yet unidentified young Anglo woman found by truckers about 7 a.m. Wednesday, December 11, in an I-37 park. Sheriff Williams said the young woman, judged by the autopsy to be from 25 to 28 years old, weighed 232 pounds and was 5 feet 6 inches tall. She had collar length, slightly frosted light brown hair and was found wearing a size 40 white blouse under a dress with black and red plaid imprint on a white background.

The first leg of 70 mph signs to be changed in the state was along Interstate Highway 37-beginning at Corpus Christi and rippling northward through the Brush Country to San Antonio. Local TxDOT employees scrambled for several days before the event on Friday, December 8. They were able to make a few temporary “70” metal plaques that were riveted over old “65” signs and placed along IH 37. These will be replaced as new official signs are made.

The area champion Charlotte Trojans landed nine players on offense and seven on defense as the all-district football teams were announced in District 30-A last week. Four Trojans made first team offense and three made it on defense. Selected first team on offense were running back Gary Vallejo, wide receivers Ben Schrutka and Daniel Luna and lineman Sam West. Named to the first team defense were lineman Ethan Luna, linebacker Matt Wagner and safety Ruben Campos.

U.S. Representative Henry Cuellar plans to be in Tilden on Friday, December 16, to announce that McMullen County is being awarded $150,000 from the Transportation, Treasury, Housing and Urban Development Appropations Act (2006). The money is designated for the construction of the county-wide community center, which will be built adjacent to the Tilden’s Lions Club Arena-at the site of the present pavilion.