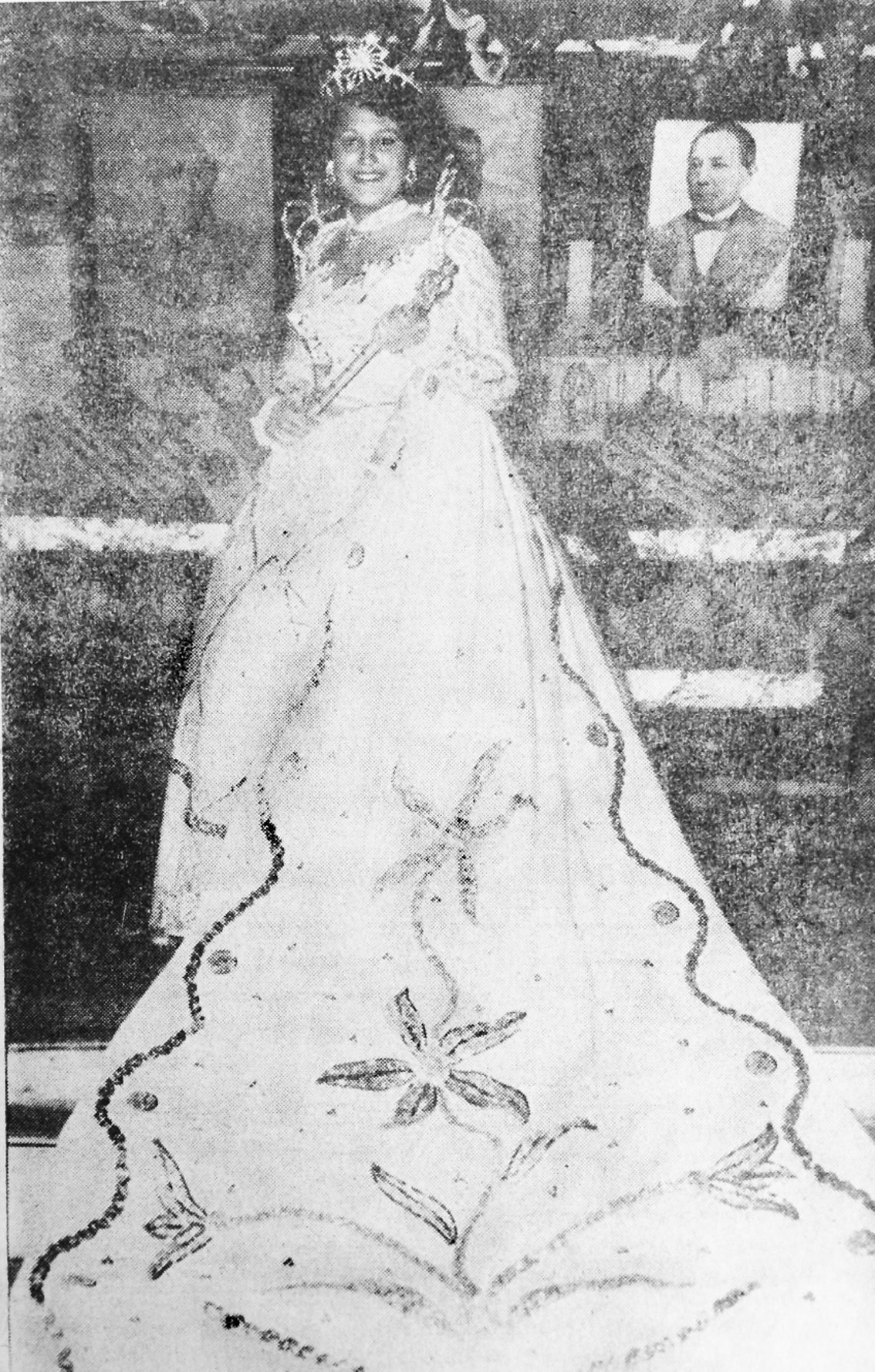 Diez Y Seis Queen-Miss Evelia Huerta is royally gowned in white as she rules over the Diez y Seis festivities held here last weekend. She is the

For the first time since it was organized nearly 100 years ago, two women are serving on the Atascosa County grand jury, which convened Monday. The grand jury expected to wind up its session late this (Thursday) afternoon. No indictments have been returned as yet. Women serving on the jury include Mrs. Norma Purgason of Jourdanton and Mrs. Hugh Favor of Charlotte. Other grand jurors are John Temple, Roy Couser, J.B. Martin Jr., Harold Hufford, R.R. Meadows, Glen Cowley, Robert J. Hayes, Earl Cotton and Clarence Erwin.

Larry Persyn, 20, 1953 graduate of Pleasanton High School, has been named to receive the American Farmer degreehighest FFA degree to be achieved-at the national FFA convention in Kansas City, Mo., next month. He is the first member of the Pleasanton FFA chapter ever to earn the degree. Only one of every 1,000 FFA members can qualify for the American Farmer degree. News of Larry’s success came late last week. Earlier it had been announced that Ronnie Persyn, 17, Larry’s younger brother, was the winner of a regional award in Farm Mechanics with a chance at the national award. To qualify for an American Farmer degree, an FFA member must have earned a state degree, must have graduated from high school and completed 36 months in vocational ag. He also must have earned at least $1,000 from his farm projects, and demonstrated qualities of leadership.

Gov. John Connally, one –time Wilson County farm boy, will be the featured speaker at the Silver Anniversary celebration of the Atascosa Soil and Water Conservation district here Thursday evening. Program, which will begin at 7:30 o’clock, will be held in Charlotte’s new 3,000-seat rodeo arena. Seating capacity will be upped by the use of folding chairs, according to Charlotte community leaders, who point out that parking space is ample. “Everybody is invited to this anniversary celebration,” said Ernest Weiser of Big Foot. “It’s not just for district cooperators but for the general public.”

Thieves broke into the Leon theatre here sometime after midnight Sunday, but were apparently scared off before they could take anything. Constable G.K. Kindrick said the break-in was discovered by Manager Frank Chamrod Monday morning. The officer reported one of the theatre front doors had been forced open to gain entry. A glass door on a candy case had been forced and three cases of candy removed and placed on the floor. Panel of the office door was broken and the door

was opened. Kindrick said nothing had been missing leading to the theory that the burglars became frightened and left the theatre before completing their thievery.

Edgar Mueller is the last of his breed-at least he is the last cotton farmer in Atascosa County. Cotton is a thing of the past in this county. There used to be over 3,000 acres planted annually, but now only 34 acres, and that all belongs to Mr. Mueller. This cotton acreage is part of Mr. Mueller’s 200 acre farm which is located outside of Jourdanton. Mr. Mueller is also a peanut farmer, and has been in that business for 49 years and been a cotton farmer for the past 30 years. He remembers when he was paid a $1.00 to pick cotton, and got 35 cents a bushel for his peanuts. Now prices are up, he added thankfully. Despite all the rain on his cotton, Mr. Mueller says he will make about a bale and a half per acre, and that will make him some money.

Sunday will be a big day in Jourdanton as St. Matthew’s Catholic Church will hold their annual picnic, and will be celebrating the parish’s 50th anniversary. Dinner will be served form 11:30 until 2 and then a Mexican supper will be served from 5 until 7. At the noon meal they will be serving barbecue beef and sausage, with all the trimmings, for only $2.00 for adults and $1.50 for children. Plates will also be sold to go and they will have homemade kolaches.

placid life of Atascosa County but last Thursday, Sept. 12, was an exception. Louise Foster was gazing out of the window at the swimming pool at her home on Old Pearsall Road a little before 8:30 a.m. Thursday when she noticed the water sloshing in a peculiarly agitated manner. Transfixed with astonishment, Louise gazed a moment longer and streaked for the telephone to call her mother, Peggy Austin, to come over and verify the phenomenon. She did. “I thought perhaps I was hallucinating or something!” explained Louise.

The Atascosa County Sheriff’s Office and Atascosa County EMS units jumped into action Friday evening, September 15, when over one hundred members of the Crystal City band, flag corps and cheerleaders succumbed to what was at first thought to be food poisoning. According to Atascosa County Sheriff Tommy Williams, the buses loaded with about one hundred and twenty students were returning home after a football game with Texas Military Institute shortly after 10:30 p.m. As they neared Lytle, students began complaining of abdominal pains, nausea, weakness and headaches. At Lytle, two buses pulled off I-35 onto the parking lot at Harris Western Wear. The Atascosa County Sheriff’s Office was notified of the emergency and deputies rushed to stop the other two buses and return them to Lytle.

Three hours and fifteen minutes. That’s how long it took the Pleasanton Eagles to force Tuloso- Midway into sending

smoke signals. 15 seconds. That’s how long it took Pleasanton kickoff returner Ray Lopez to run back a Warrior kickoff to help send Pleasanton into overtime. Fortunately for Pleasanton, those puffs of smoke that the Warriors were sending never left Eagle Stadium on Friday and it was the Eagles doing the rain dance over the Tuloso-Midway Warriors winning in thrilling fashion in a double-overtime game 34-31.