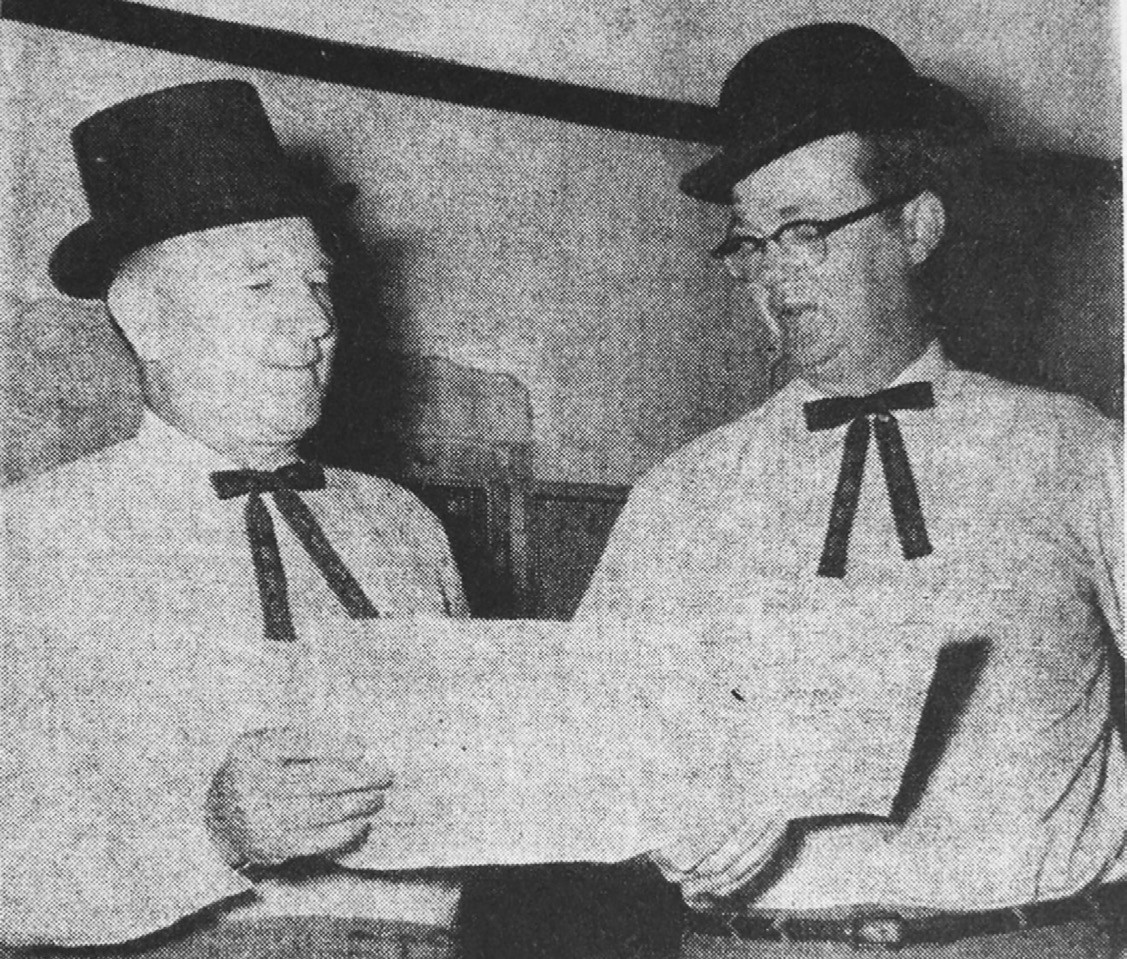 Centennial Lochinvars-Duded up in centennial hats are Cecil Smith, left, and Taylor Brite, high moguls of the coming Atascosa County Centennial Brite is county centennial chairman and Smith is his No. 1 assistant. Hats such as these and other centennial novelties will be put on sale soon. Express photo originally ran in the May 17, 1956 edition of the Express.

Atascosa County Election Administrator Rosie Reyes said she was pleased with the turnout during the Early voting. Her office handled early voting for several (but not all) of the schools and cities in the county. As an example, Friday she explained that 277 voters cast their ballots early in the Jourdanton city election. Because her staff had more time to explain the new system, 205 voters used the new electronic voting machines-instead of the paper ballots. “We encouraged the voters to try out the machines,” Reyes stated, “and they found out how easy they are to use.” In the Jourdanton ISD race, 34 voters took advantage of early voting-only two voters cast early ballots in the City of Christine election. Jourdanton, as most people might have guessed from events over the past year, had one of the hottest elections. In the battle for mayor, Larry Pryor won handily over Mayor Pro Tem Patsy Tymrak-Daughtrey (393 to 94 votes).

Raymond Marek participated in the 1996 Texans Transplant Olympics held in Houston recently. He was sponsored by Victoria Bank & Trust-Pleasanton and brought home four medals in five events. Not bad for a man who only a few years ago could barely walk across the floor. Marek, a victim of viral cardiomyopathy, probably would not be alive had he not received a heart transplant on September 2, 1988 during surgery at the UT/SA Health Science Center. “It gave me back my life,” he commented. Marek “took it easy” for at least a year following his transplant surgery but being young and, before the onset of his illness, very active, he didn’t like being sedentary. With the permission of his doctor he began a moderate physical fitness program. “Nothing strenuous, you understand” explained Marek, who will be on drugs the rest of his life to prevent organ rejection. “Just enough to keep me reasonably healthy and in good condition.”

Educators from all over the state of Texas have been receiving notification of the status of their TECAT results. This mandatory exam of basic reading and writing skills was a part of the education reform package instituted by the legislature in 1984. The legislation, specifically House Bill 72, has been involved in protests, rallies and lawsuits for many weeks prior to and after the March 10 date of the test. One local teacher, Pleasanton’s Special Education Director Iris Porter, still has a case pending in district court concerning the legality of TECAT. The Texas Education Agency reported last week that approximately 97 percent of the 202, 084 certified teachers who took the test in March passed. However local administrators could give no actual figures pertaining to the number of Atascosa County teachers who may have passed. Bill Hogan, superintendent at Poteet, said that a few teachers have been bringing in their TECAT stickers. But since there is no set deadline for doing so, he continued, “We really won’t know anything until the end of summer, after the June testing date.”

Doug Williamson, who has served as Pleasanton Band Director for 28 years, announced his resignation Tuesday, effective at the end of this school term. Williamson has accepted the position of Junior High Band Director at Kirby, in the Judson School District, San Antonio. Under the direction of Williamson, the Eagle band had gained the reputation of being one of the top AAA bands in the state. They have made 22 straight I’s in UIL Marching Competition, and 17 Sweepstake titles in the past 21 years. Currently the Eagle Band is on a streak of four straight Sweepstakes. In announcing his resignation, Williamson stated that he felt that the move would be better for he and his family and offered better financial opportunity.

Tuesday and Wednesday, May 22 and 23 are the big days for the picture taking of your youngsters! The Express is having pictures taken of all children who are brought by their parents or other guardian to the Red Fox Motel between 9 a.m. and 6 p.m. on those two days absolutely free of charge. The Woltz Studios of Des Moines, Iowa, a nationally known portrait studio, will be in charge of photography. The Express wants a picture of your child to print in its forthcoming feature. “Citizens of Tomorrow,” a series of photographic studios of local children. The more we have the better the feature will be, so the cooperation of the mothers and fathers is urged. It often seems to parents that children are little one minute and grownup the next, so fast does a child’s growing stage pass. Here is a splendid opportunity to catch the likeness of your child or children at the present stage for the pleasure you will get out of it in future years and for the pleasure you will enjoy in seeing it in print. You will want to clip it from this, your hometown newspaper, and preserve it for the youngster when he or she grows up. There is absolutely no charge or obligation for taking the pictures. Parents don’t have to be a subscriber to the Express nor even a reader. You do not have to purchase pictures either, though you may obtain additional prints by arranging direct with the studio representative if you want them. That is entirely up to you!