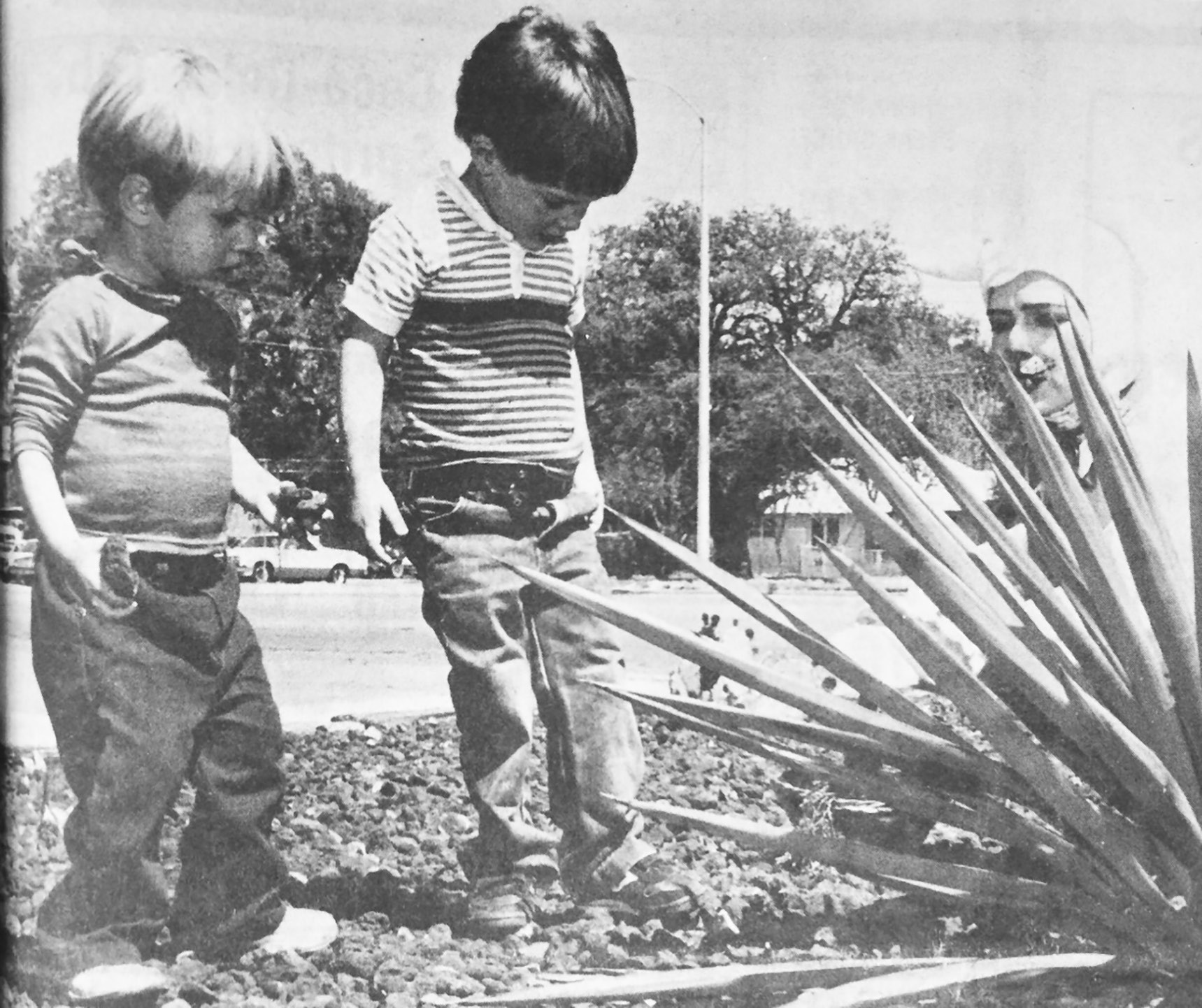 “Eggs”actly where I’d put one-The Easter bunny made a surprise visit to Pleasanton last Friday and gave these two youngsters a chance to give their point of view as to where they thought a good hiding place would be for their Easter eggs. Since they were in South Texas they figured a Spanish dagger was as good a place as any. Pointing out their favorite spot are Byron Lamb, left, of Houston and Johnny Lippiatt of Germantown, MA. Byron is the son of Linda and Brent Lamb and Johnny is the son of John and Bobbie Lippiatt and both are the grandsons of John and Lessie Lippiatt of Pleasanton. Express photo originally ran in the March 26, 1986 edition of the Pleasanton Express.

The 3rd annual Poteet Clean Campaign is scheduled for this Saturday, April 1. Organizers are asking this to be a general day of cleaning. People in Poteet should do all they can to clean their homes, yards, neighborhoods and public areas of the community. A group of citizens will gather at 9 a.m. on that day, downtown at the parking lots across from Poteet City Hall to conduct some community clean up projects. One such project is the replanting of the barrels downtown. Also, there will be some painting done downtown on buildings that need sprucing up before the Poteet Strawberry Festival Parade.

One of two track meets that will be held in Atascosa County, the Annual Wally Daetwyler Relays, is set to go Saturday at 9 a.m. promptly at Jourdanton High School. Jourdanton track coach Norman Borth announced Monday that 12 teams in three divisions will assemble at Jourdanton Saturday for track and field action. Divisions boys, varsity girls and junior varsity boys. The boys’ field events start at 9 a.m. and the girls running preliminaries are set for 9:30 a.m. The girls’ field events will begin thirty minutes after the boys’ field events are completed and the boys running prelims are scheduled for 12 noon.

Travis Hall, an officer with the Texas Department of Public Safety, has been transferred back to Pleasanton and will be assuming his duties here on April 2. His station for the last two years has been Gonzales. A 1967 graduate of Pleasanton High School, Hall served four years in the Navy in overseas stations. Upon his return to Pleasanton, Hall worked as a disc jockey at KBOP radio for many years before he joined the police force. Prior to joining the Department of Public Safety in 1984, Hall also worked as an Atascosa County Sheriff’s Deputy. “Linda, Chad and I are really looking forward to coming home,” Hall stated. His is married to the former Linda Divin, and their son, Chad, is a junior high son of Viola Hall of Pleasanton and the late Travis Hall Sr.

“There’s nothing so sweet as the sound of a dollar jingling in your jeans,” and this saying set the tone of the reports at the annual South Texas Sugar Beet Growers Association meeting held in Devine, Monday night. Dr. Eli Whitley, agronomist in charge of new crop testing at A&M University, pointed out that 518 samples of sugar beets were processed this year from test plots in this area and “yields were terrific.” The average was 20 tons to the acre with a 15 percent sucrose (sugar) content. “We’re always looking for new crops for Texas industry,” Whitley said, “and about 99.9 percent are failures but sugar beets look like a winner.” “What would a sugar beet quota mean to you people in South Texas?” asked Dr. R. E. Patterson, dean of agriculture at A&M Extension Service. He quickly answered his own question and as statistics hit the ears of his 300 years listeners, there was a rumble of amazement.

Samuel Shearrer, owner of Shearrer’s Center, this week announced plans for a large new shopping center to be constructed soon. He has been in the grocery and variety business in Pleasanton since 1952. Mr. Shearrer said, “It was apparent last year that increased business was forcing us to a larger and more modern structure. We had been dreaming of it for years but now we were faced with the reality of the matter and decided to go ahead with it. We engaged the firm of Rinard and Rose to assist us in a study of our needs and they have just completed the final draft of plans.” He continued, “We are doubly glad that we have the plans ready, for our 1966 business increases have proven that it s a necessity. We are proud of what we will have to offer in our new shopping center, for it is our belief that it will be an asset to this growing community. Plans are now ready to be submitted to contractors for construction bids. We will also consider leases for office space and commercial businesses in the community shopping center.”

“C” Company of the 357th Infantry Regiment-a reserve Army unit-is now being organized in Atascosa County. Formation of the company has been approved by Washington officials, and the unit will hold its first meeting next Monday night at 7:30 o’clock at Legion Park. 1st Lt. Marion (Bud) Smathers, who served in Korea for 12 months with the 3rd Infantry division, has been named company commander. Other company officers include 1st Lt. Albert Ulcak, another veteran with Korean service, and 2nd Lt. Bobby Dornak. Eighteen reservists have signed for service in the company which will spend two weeks annually at a summer camp. “We hope to recruit at least 50 men for the company,” said Lt. Smathers. “Right now we’re chiefly interested in signing up reservists or veterans. After summer camp we hope to add some high school boys to our roster.” Age limits are 17 to 35.