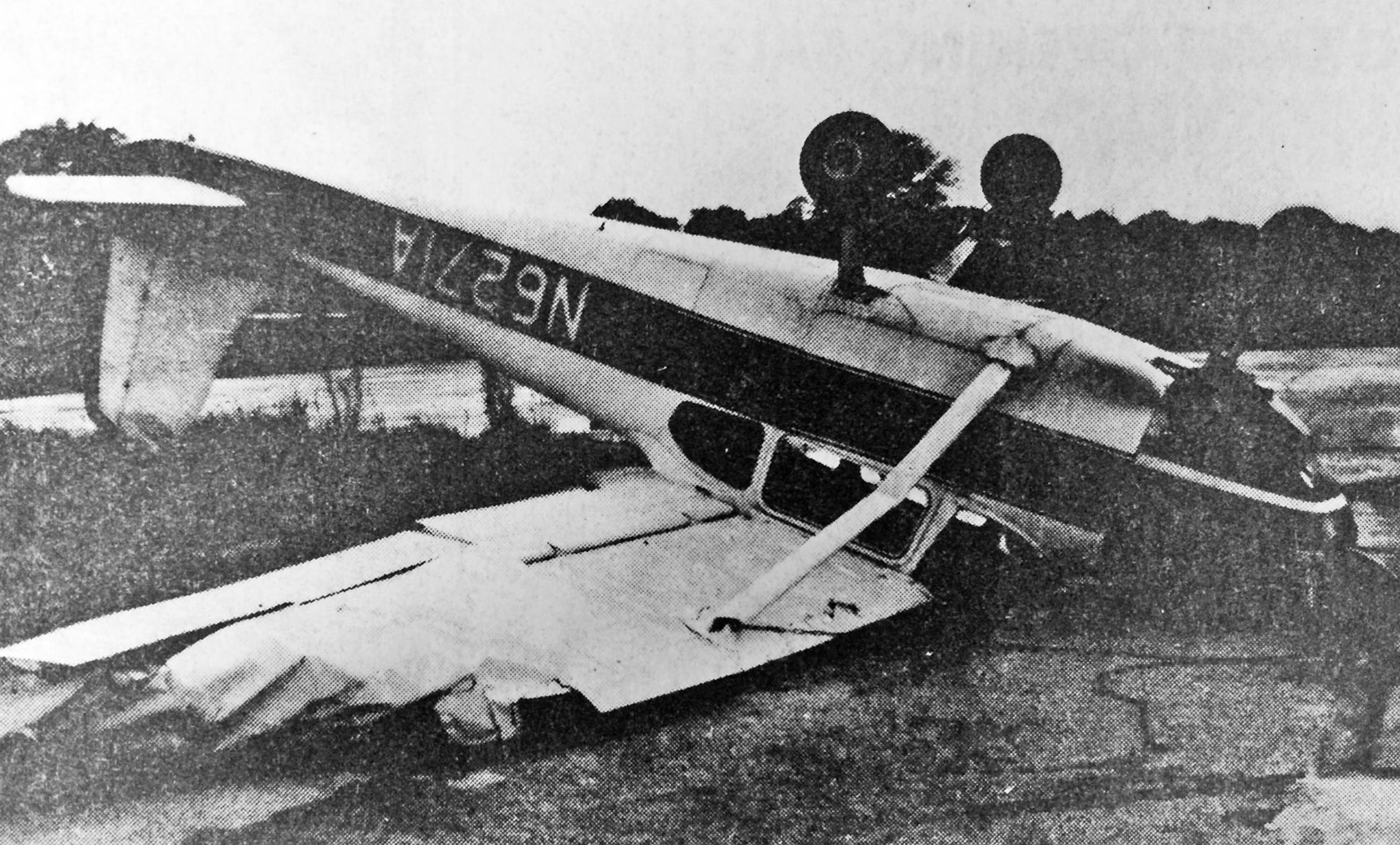 FLIP FLOP-Pictured is one of the damaged airplanes from the local airport, after Sunday afternoons high winds and gusting rains. Damage is estimated at $1,000. Express photo originally ran in May, 1975.

The preliminaries are out of the way, and the C of C’s annual clean-up campaign officially opens Monday with trash pick-up in Pleasanton. “Have your trash in containers on your curb early Monday morning for the pick-up,” advises L. L. Meriwether, C of C clean-up chairman, adding that trash must be in containers which one man can handle.

Resumption of polio shots in Atascosa County have been postponed temporarily, but Dr. J. M. Faggard, county health officer, cautioned parents “not to lose your confidence in the Salk vaccine.” Originally it had been planned to begin administering the second and last of the two-shot series to first and second graders on Monday. The inoculations have been halted by U.S. Surgeon General Leonard A. Scheele to determine if present supplies of the vaccine are safe.

John Bowen, grandson and namesake of Pleasanton’s founder, was an invited guest at Pleasanton’s city council meeting last night. A resident of Washington, D.C., Mr. Bowen told the council members how his grandfather, John Bowen, gave the land on which Pleasanton now stands and how he named it for a friend, John Pleasants. Bowen has been in Pleasanton for the past two days visiting his brothers-in-law and sister, Mr. and Mrs. Warren Davis.

At the recent piano auditions, sponsored by the National Guild of Piano Teachers, over half of the 6 students who entered made Citywide Circle ratings, reflecting from 93 ½ to 97 percent. Pupils enter the auditions in specific “memberships”, which indicate the number of solos they have memorized. Local membership means that the student has memorized two or three pieces to be played for a judge who comes from a distance to preside as adjudicator for all of the students.

It’s official now, Atascosa McMullen Counties area will have the multi-million lignite coal fired electrical dollar generating plant. Offical announcement was made at the South Texas Electric Cooperative annual meeting held in April in Victoria. Total expenditures anticipated to complete the entire installation will be in the neighborhood of $220,000,000 to $230,000,000. One million dollars have already been spent in exploration and development of the lignite coal project.

Atascosa County Livestock Association is sponsoring a barbecue supper and dance Saturday at the Livestock Show Barn. delicious barbecue, with all the trimmings, will be served from 6 p.m. till 8 p.m. for only $2.50 per plate. Charlotte FFA teacher Melvin Finch and his crew are in charge of the barbecue, and they promise a real fine meal.

Work was planned to begin Tuesday, May 7, or Wednesday, May 8, on a cloud-seeding operation expected to provide water for the city of Corpus Christi. The Pleasanton area is included in the 6,000-square-mile area to be covered by the project. A twin-engine plane was scheduled to begin searching for appropriate cloud formations for the seeding operation. North American Weather Consultants, the firm conducting the project, had already set up radar monitoring stations which were in operation Monday.

Jourdanton Days Kactus Kick, sponsored by the Chamber of Commerce and Auxiliary will get underway Thursday, May 16, and continue through Saturday, May 18. Ten beautiful and talented young ladies will vie for the annual pageant which begins the three day celebration. Pageant will be held at the Jourdanton School Cafetorium at 8 p.m. on the 16th.

Pleasanton Police Chief Keith Blair confirmed reports of a bomb threat being received at a local business on Saturday, April 29. It was just after 3 p.m. when police learned of a possible bomb threat at the Pleasanton firm. Police were told that an employee had received the call. When the chief arrived at the scene, officers Greg Gentry, Diana Bautista and Donald Ramirez were already at the scene. A short time later Lt. John Eric Rutherford arrived to assist.

Three Poteet students, Brad Jenschke (3rd grade), Valerie de la Garza (4th grade), and Henry Fortinberry (3rd grade, entered the 22nd annual Paint to Music Contest which was sponsored by the San Antonio Symphony League. All entrants listened to a preselected group of pieces and they did an art project based on what they heard.

Atascosa County Sheriff’s Department received a report at 1:12 a.m. Sunday, April 24, of suspicious activity on Tumlinson Road. The report was that there was a U-Haul truck parked on the road and three 4-wheelers (ATVs) parked by its side. There were also two individuals allegedly at the scene. The vehicles in that location were so unusual that passersby stopped and took notice.

Atascosa County Sheriff’s deputies broke up a methamphetamine lab in Atascosa County last week. Deputies received word a few days earlier that a “meth lab” was operating in the 300 block of Sundown Lane in the Primrose community. Very early Tuesday morning April 27, officers received a tip that a “cook’ was taking place. Deputy Sgt. Henry Dominguez and Deputy Kevin Edwick investigated and received consent from the homeowner to search the house. Once indoors, officers allegedly found a working meth lab with all its chemical components.