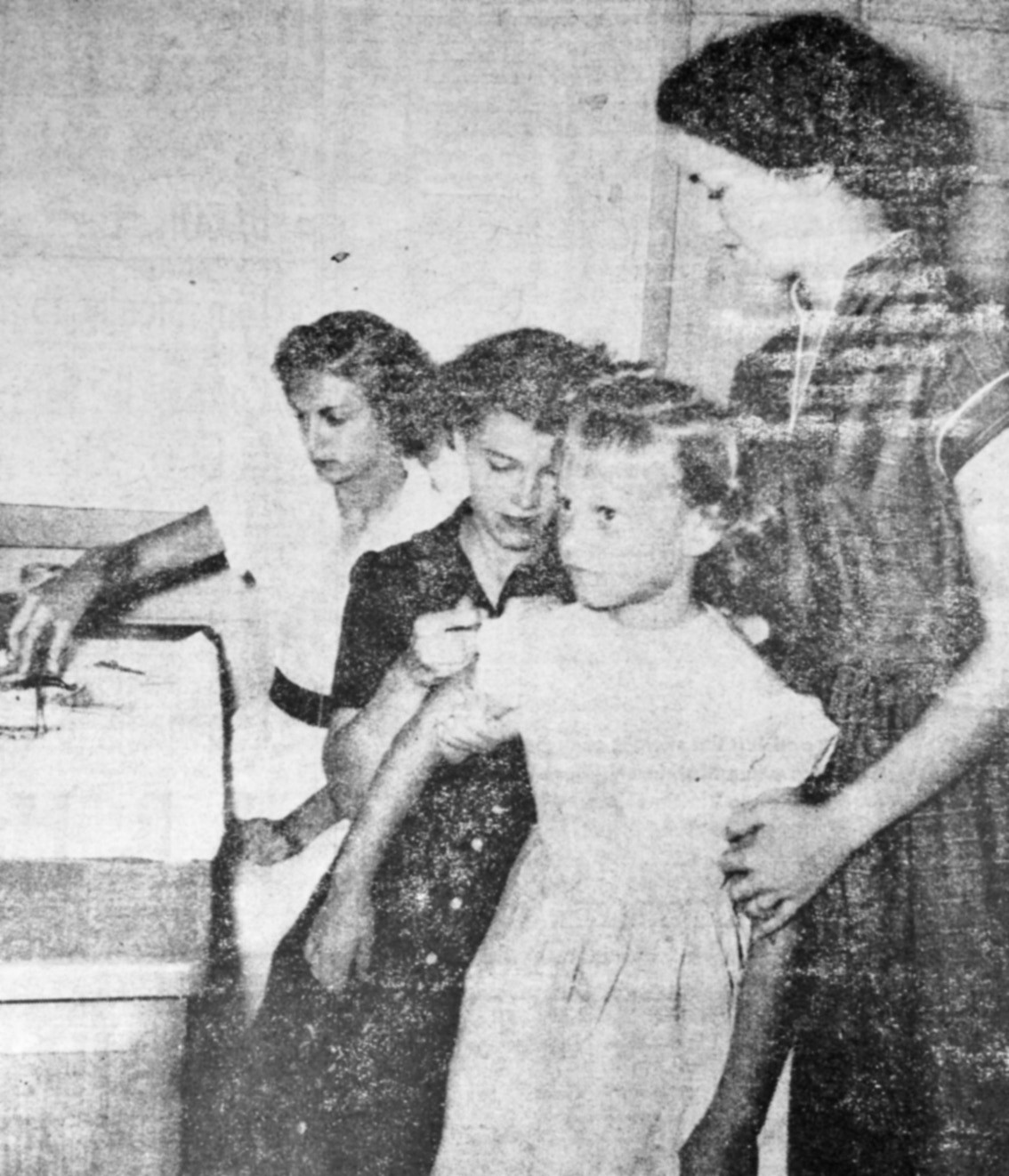 First polio shot-First youngster to get a polio shot at Poteet was Kathy Hayes, second grader. A brave little girl, Kathy looks a little dubious about the whole thing but she didn’t complain. It was suspected that besides getting a polio shot, Kathy might also be getting the measles. She was the first in line because she wasn’t feeling too well. Giving the shot is Mrs. Harriet Fischer, school nurse. Standing next to Kathy is Evon Harrison and Marie Dauwe is at the far left. Photo originally ran in the April 28, 1955 edition of the Pleasanton Express.

A 12-man committee is being appointed to study Pleasanton school district problems and report to the county conference on May 11, Supt. W.J. Everitt announced yesterday. The study is being made at the request of the state education agency and will follow a definite pattern to make findings sought by the agency.

A circus motif will prevail at the annual May Fete to be held Saturday night at Eagle field here. Miss Ina Fae Rutherford will reign as queen of the May Fete with Coy Bowman as king. Princesses include Janice Slomchinski, Arminda Jones and Phyllis Davidson.

Pleasanton was praised and rewarded with $1,000 as one of the two top winners in Central Power and Light Company’s 1964 Arm for Industry contest at a luncheon here yesterday noon at Mac’s Restaurant. CPL Vice President Chester C. Wine presented a plaque and two checks for $500 each to Everett Degenhardt, C of C president, in recognition of Pleasanton’s accomplishments in the community self-improvement contest.

Crop prospects were boosted over much of Atascosa County this week by twin rains, but accompanying hail badly damaged crops in a localized section of the Tank Hollow area. Rains ranged from 1.5 inches to more than three inches.

will be judged for regional honors in the statewide Texas Community Improvement Program Contest on Tuesday, May 6, 1975. The Atascosa County community won first place in Extension District No. 13, and it will be competing against the winners of Extension districts 5 and 10. Regional winners will advance to the state finals. The exact time of judging and the schedule of events will be announced over the radio as soon as they become known.

The Texas Highway Department has announced a new highway construction project beginning 5.0 miles Southeast of Pleasanton on IH 37 for a distance of approximately 10.8 miles to 3.6 miles north of Campbellton. The construction will consist of signing, delineation and reflective pavement arrows. The Texas Department and the contractor. J.L. Kubecka, Inc. of Victoria, stated that the construction will begin on April 28 and will be completed by September 1975.

Poteet City Council conducted a public hearing on the city’s general and revenue sharing budgets at its regular meeting April 23. Atascosa Appraisal District Chief Appraiser Vernon Warren was present to discuss with the council the cost of the appraisal district doing the city’s tax collecting. Warren told Mayor Sal Almanza and the council that the cost would be approximately $6,000 per year.

Six young ladies will be vying for the crown of Miss Jourdanton but will be selected in a different manner than in years past. In an attempt to include the community as well as high school students in the selection of the honor, the chamber has decided to hold elections for the title with the girls doing some campaigning instead of interviewing and will allow the citizens to meet the representatives who will travel south Texas for Jourdanton.

Atascosa County deputy sheriffs were kept busy Sunday night, April 23, when incidents involving knives erupted at opposite ends of the county. Deputy Hunter Altgelt was dispatched to Primrose Sunday evening in response to a call involving a woman and her common-law husband. The 26-year old woman had obtained a shotgun and was threatening to harm herself. A short while later Deputy

Joe Paez was dispatched to the Campbellton Exit on I-37 where a 19-year old man was thought to have slashed his throat.

The Jourdanton Squaws defeated second place seeded Natalia 1-0 in District 28-2A to end the 2005 season. The win lifted the Squaws into a tie for

third place with Dilley in District.

The home of Richard and Wanda Beard of Pleasanton was destroyed, Sunday, April 24, by a fire that swept quickly through the structure sometime after 6:25 p.m. Pleasanton Police Officer Clayton Deagen was ending his shift Sunday evening and was headed toward his home

when he noticed smoke as he approached Pleasanton High School. He quickly called the Police Dispatcher Archie Pena who said he had not received any calls about a fire.