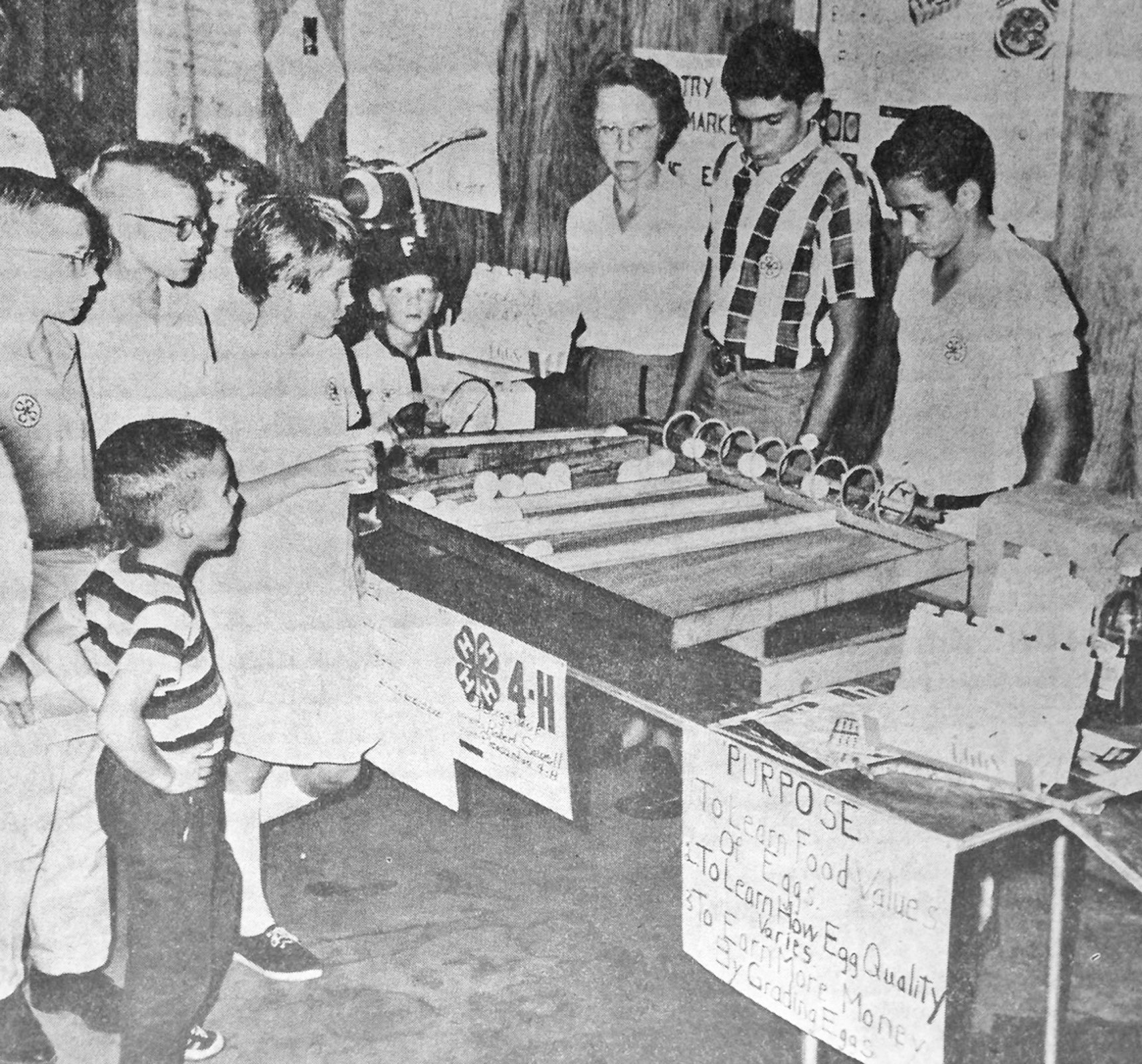 In operation-This display by two Pleasanton 4-H’ers drew considerable attention of all age groups at the 4-H Fair, Saturday. The egg grader was almost in continuous operation, grading and sizing fresh eggs by automation. Mrs. Geo Jasik (center) stands behind the grading machine demonstration set up by George Jasik Jr. and Robert Sowell, (center right and left). Express photo originally ran in the October 20, 1965 edition of the Pleasanton Express.

The Poteet Aggies took their first district game with a 13-6 triumph over the Mathis Pirates at Mathis, Friday. Poteet countered immediately after the opening kick-off on a 70-yard touchdown march. The Aggies reeled off six first downs before Ramblin’ Ralph Reed slashed up the middle for six and an Aggie T.D. Danny Ray Pippin converted. Mathis had possession of the ball for only four plays during the first half, so completely did Poteet dominate play. The Ceniza Garden Club

Damage was reported in two localized sections-one south of Pleasanton and the other in Jourdantonwhen an electrical storm unleashed high winds and heavy rains shortly before noon, Monday. An estimated $1,000 in damages was done at the E.G. Miles farm, four miles southeast of Pleasanton. The wind tore up a carport and demolished a small saddle house. Miles had left for Pleasanton only a few minutes before the storm struck. No one else was home. When he returned about 12:30 p.m. he found

several trees snapped by the winds in addition to the structural damage.

October 24 is the big day. Final arrangements are being made and next Sunday is homecoming day in Christine. There will be church services at the local churches beginning at 11 a.m. Bro. Harold Campbell will welcome you at the Baptist Church and Rev. Pat Armstrong at the Methodist Church. At noon, there will be barbecue beef with all the extras at the Community Center. Mrs. and Mrs. LeRoy Coleman have graciously donated a calf for the event; and from listening to the local ladies discuss the menu it sounds good enough to eat. Better not miss it.

Pleasanton General Hospital is a 32-bed facility designed to serve residents of Atascosa, Wilson and Medina counties and was opened Wednesday, Oct. 22 by Medenco, Inc. one of the nation’s largest health service organizations. Announcement was made today by Mrs. Patricia Ponder, R.N. who will serve as the hospital’s administrator. Medenco, Inc., a Houston-based company, operated 17 hospitals in four states. Hospital building was formerly occupied by the Pleasanton Hospital and Clinic.

Fashing 4-H Club held its monthly meeting on Oct. 15 at the Fashing- Peggy Civic Center. The president, Sherry Novak, called the meeting to order. Jeffery Henke led the 4-H motto, pledge and prayer. It was decided that the club would have a rabies vaccination day. Reports were given by

Bonnie Novak and Cynthia Krueger on various activities throughout the county. Date for the Christmas party was set for Dec. 13, 1975.

House Bill 72 claimed a few Atascosa County victims but McMullen County came through unscathed after the first six weeks of school. Surprisingly, the least disrupted department when the grades were announced was sports. Because of numbers, one of the most vulnerable departments among the Atascosa County schools was band. Pleasanton lost 16 of its 128 strong in the Eagle Band, Poteet lost 18 out of 88 Aggies, Jourdanton lost 17 out of 82 Indians, and Charlotte lost 8 Trojan Band members. Charlotte sustained no other fine arts or co-curricular student losses.

Don’t forget to join the fun-filled activities at the United Way Halloween Carnival to be held at St. Andrew’s Hall on Oct. 31 from 6-10 p.m. Be sure to have your palm read before you go into the Haunted House or Frankenstein’s Loboratory. Test your skills to the dunking booth and wet sponge throw. Let’s hope you don’t get put into the jail house so many times that you cannot enjoy the bottle ring toss, balloon pop, bean, sand box, or the pick-pocket witch and goblin.

A lengthy investigation, aided by a tip to Atascosa County Crimestoppers, climaxed last week and resulted in the arrest of a Poteet woman on drug charges. Assisted by

the 81st Judicial District Narcotics Task Force, the Poteet Police Department and the Texas Department of Public Safety Narcotics Service, the Atascosa County Sheriff’s Office executed a search warrant at an ice house in Poteet October 11. According to Atascosa County Chief Deputy/Chief Investigator David Soward, the arrest was a result of an investigation which had spanned several years. The investigation culminated with the toip to Crimestoppers.

On Monday, October 10, about 1:30 p.m. the owner of Little Jim’s Country Store near Somerset looked up to find himself face-to-face with a man wearing a ski mask and holding a shotgun. The armed man demanded all of the money in the cash drawer, and of course, the owner complied with the demand. The man fled in a light blue older model car-possibly an Oldsmobile or Buick. The man left the store on Heitmann Road traveling east into Bexar County.