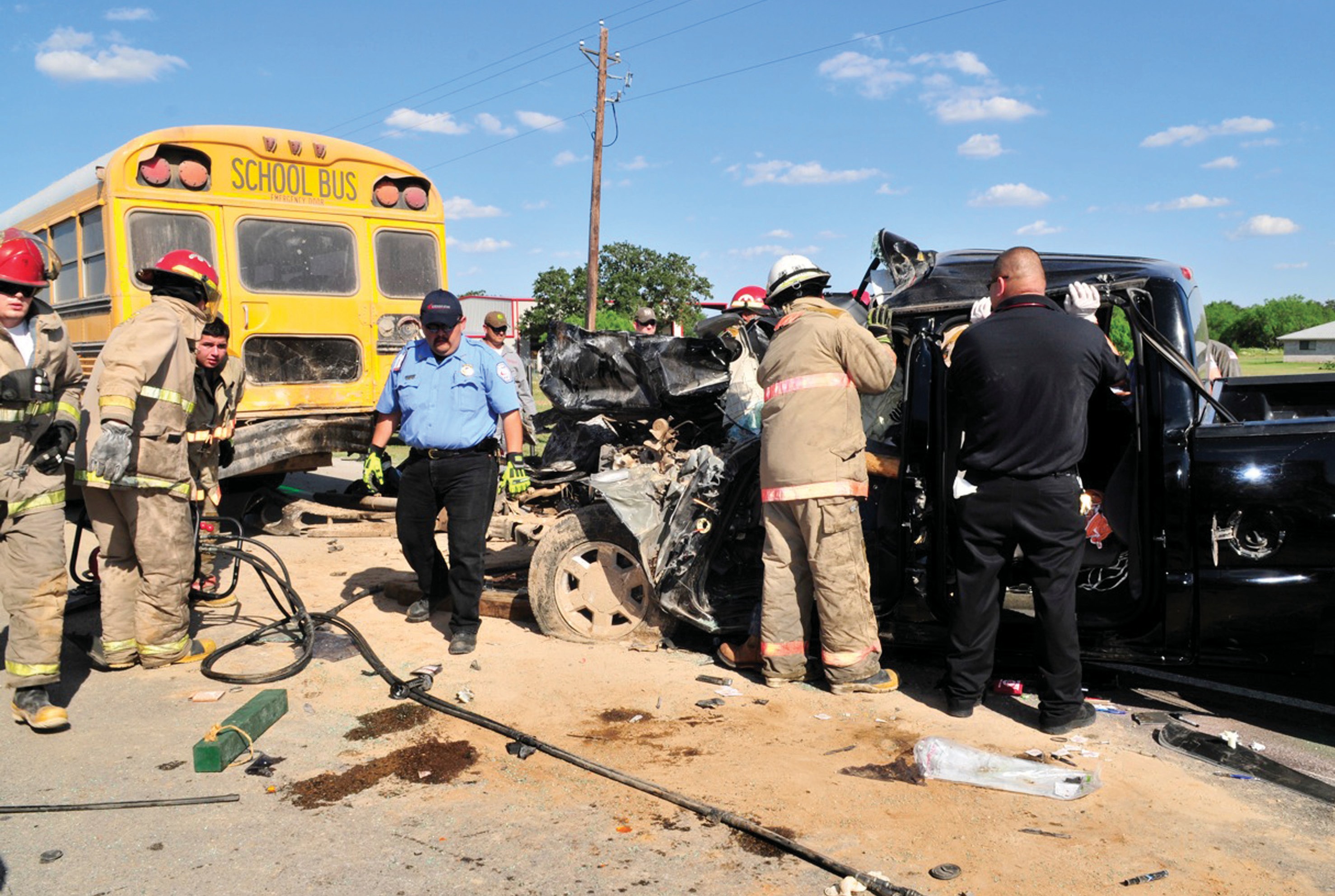 A total of 18 students and the bus driver were sent by ambulance to South Texas Regional Medical Center in Jourdanton for minor injuries and evaluation. The students ranged from pre-kindergarten age to 12th grade. All students were released by the end of Wednesday night, said Hall, with the last student leaving about 9:30 p.m.

According to the Department of Public Safety, the school bus had stopped on Highway 97 East (near Good Shepherd Lutheran Church) to drop off two students, at about 4:30 p.m. The bus was not in motion when it was struck from behind by the driver of a pick-up truck, 50-year old Joe Badillo of Pleasanton. He was given a citation for failure to control speed.

The speed limit in that area is 70 mph. DPS officials said there were not any skid marks and they could not determine how fast the truck was driving.

Badillo was transported by Air Life to University Hospital in San Antonio for possible broken bones.

“We’ve had drills and we prepare for the worst and hope for the best,” said Hall. “This accident demonstrated that we have such well-prepared, supportive employees. We are blessed that the students were okay. Even in chaos, the bus driver and aide did what they were supposed to do.”

PISD Superintendent Cynthia Clinesmith was amazed at the response and level of care shown from everyone. Spartan oil field workers were among the first to respond, asking how they could help, as the accident was in front of their business. Clinesmith is also appreciative of the extensive emergency service support and cooperation received from the Pleasanton Police Department, Pleasanton VFD, Jourdanton VFD, DPS and county officials. The Border Patrol was at the scene because an agent’s child was involved, said DPS.

Clinesmith and Hall also thank the staff at STRMC who were fantastic. The STRMC employees brought out food and water and were as reassuring as they could be to the students and their parents.

PISD employees also arrived at the scene to calm students and parents. The following morning, Primary School Counselor Suzi Westfall rode the bus to offer emotional support to the children. Some parents commented to Hall that her presence helped calm the nervous children down.

“Transportation Director David Zertuche and bus driver Nola La Bauve were both stellar representatives of our transportation department in their preventive and onsite practices,” said Clinesmith.

“This group transports students across over 400,000 miles each year with excellent safety and success. With our increased traffic, it is a continuing challenge that they all meet. We plan to look for ways to continue to minimize the potential for accidents through increased traffic safety communication to the public and alternate ‘stop’ locations on highways,” ended Clinesmith.

“All involved were working together,” added Hall. “That is how small towns work.”