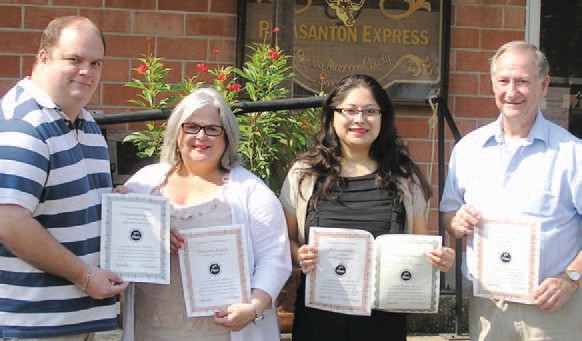 The Pleasanton Express walked away with several awards at the Texas Press Association’s Better Newspaper Contest presented at TPA’s Newspaper Executive’s Retreat. The convention was held last weekend at the Westin Riverwalk Hotel in San Antonio.

Production Specialist Manager (who also doubles as a talented photographer) David Wickersham captured 2nd Place News Photo for his two pictures. A house fire on Adams Street, taken with David’s iPhone, drew these comments from the Judge: “Good illustration of raging fire and a single firefighter’s effort which seems futile.” He also complimented on another photo of a three-vehicle crash near Eurostar Drive: “Disturbing photo of driver stuck in severely mangled car as first responders assist. Good illustration of scene and damage to power line.”

Sue Brown won 4th Place Editorials for her opinion pieces about the petition for special election for the initiatives. “Clear, informative position on local issue. Strong call to action in advance of meeting,” offered the judge.

There were a total of 169 newspapers that submitted 1,703 entries in this year’s contest. Dailies, Semiweeklies and Weeklies competed in 10 divisions.

The contest was judged by the Louisiana Press Association.

Editor Sue Brown was also elected to another three-year term as a director of the association, a position she has held since 2001.