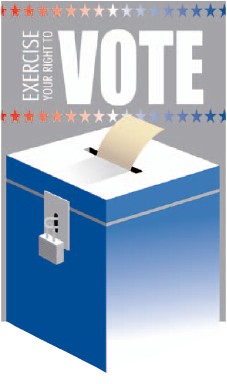 Early voting in the 2012 Primary run-off elections began Monday July 23, 2012 and will continue through Friday, July 27, 2012. As of Tuesday afternoon, the tally of early voters numbered at 168.

In Atascosa County, the candidates are as follows:

•A form of identification that contains your photograph and establishes your identity;

•A birth certificate or other document confirming birth that is admissible in a court of law and establishes the person’s identity;

•Official mail addressed to you by a governmental entity; or

•A copy of a current utility bill, bank statement, government check, paycheck, or other government document that shows your name and address.

For more information on the voting process in Texas, including where to vote, please visit www.votetexas. gov.

Janice Ruple, Election Administrator, wants voters to be aware that on election day, they consolidated voting boxes. See the information box on page 2.