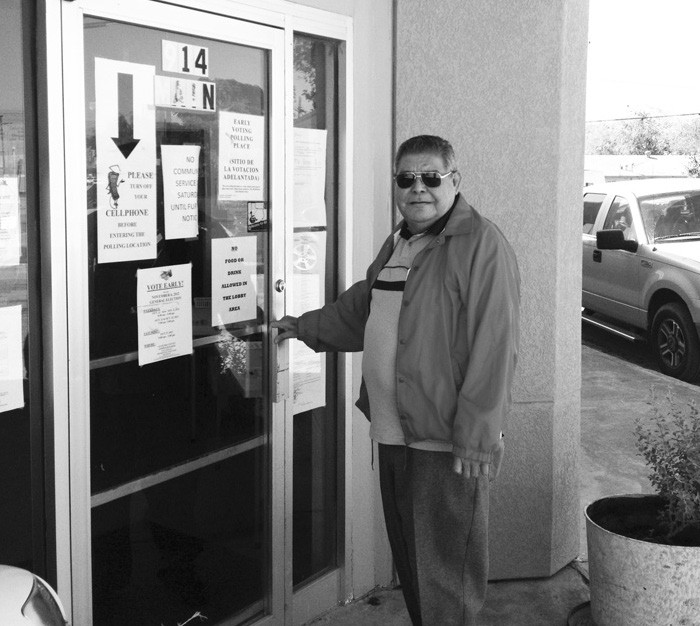 Arnie Garces prepares to vote early for the November General Election. Early voting continues through Friday, 8 a.m. until 5 p.m. Polls will open at 7 a.m. on Tuesday, November 6 and close at 7 p.m.

Early voting is still underway through November 2 and voters have made their way to the Atascosa County Election Administrators office at the Annex building in Jourdanton.

Voters can still cast their vote now through Friday, 8 a.m.-5 p.m. The sample ballots can be found online at www.pleasantonexpress.com.

Election Day is next Tueday, November 6. The polls will be open from 7 a.m. until 7 p.m. Please see the polling locations on page 14.

What is needed to vote

2. A form of identification that contains your photograph and establishes your identity;

3. A birth certificate or other document confirming birth that is admissible in a court of law and establishes your identity;

6. Official mail addressed to you by a governmental entity; or

7. A copy of a current utility bill, bank statement, government check, paycheck, or other government document that shows your name and address.

For more information on the elections process in Texas, please visit www.Vote- Texas.gov

While the Presidential Election is on everyone’s minds, here in Atascosa County, local races should also get voters to the polls.

The City of Christine is the only municipal election that will be held. While Mayor Odell Vasquez drew no opponent, at-large alderman incumbents Vicente Valero and Christi Castellano have one opponent, Olga Esquivel.

Jourdanton will not hold elections for city nor ISD this year.

Charlotte ISD and the City of Charlotte drew no opposing candidates and will not have elections as well.