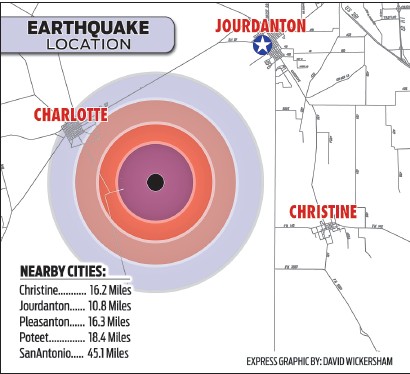 Many residents in the Charlotte and Jourdanton area were startled Wednesday, Sept. 10, when a 3.2 magnitude earthquake shook the region. It was not until the following day that the United States Geological Survey National Earthquake Information Center confirmed the earthquake. The epicenter was located 4 kilometers southeast of Charlotte.

Pleasanton Express staffer Robbie Hamby of Charlotte was among those who felt the shaking, which occurred at 12:53 p.m.

“I was sitting on the couch with my feet propped up and I felt it. I knew what happened immediately,” said Hamby.

She looked outside to see if the trees were shaking.

Later on in the day, the Atascosa County Sheriff’s Office reported on its Facebook page that many people in Jourdanton felt what they thought was an earthquake. The agency asked who else felt it and where they lived.

While a few residents reported they did not feel anything, others were glad to know they were not going crazy.

Kathryn Riggs posted that she felt it on Broadway. She described that it was, “Like a door being forcefully shut… yet the door was still open.”

Ashley Rodriguez commented, “I’m in Charlotte! I was sitting on my sofa and thought someone pushed the couch!”

Some residents online have expressed concern that the shake was related to the fracking going on in the Eagle Ford Shale, while others note that quakes are not new to the area.

Following confirmation of the quake by the USGS, the Eagle Ford Shale released the following statement: “There are two primary ways in which the oil and gas industry commonly ‘adds’ energy (pressure) into the ground. That is through hydraulic fracturing and water injection. The industry ‘subtracts’ energy from the ground by producing hydrocarbons and the associated water that generally comes with it. These two forces are constantly opposing and offsetting each other. On a localized basis, at any given point in time, it is possible that the net result of these two forces is great enough (in either direction) to cause small and local tremors. No doubt many of these are of such short duration and so small that they are never even noticed. Then there are some that make it to the observable and measurable threshold. Local and hyper local geology will generally determine the susceptibility of a particular area to these tremors.”

“Yes, but it was just a slight movement of my chair. I did look to see if anything was moving, but didn’t find anything,” said Baggerly, of the LaParita area.