Wheeler was 2002 inductee to South Texas Cowboy Hall of Fame 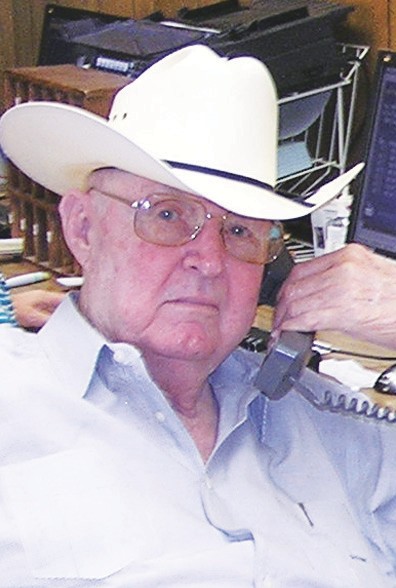 Roy Wheeler, area cattleman, businessman and philanthropist died early Tuesday morning after suffering a stroke on Thursday, January 24. Wheeler was at work and was transferred to Nix Hospital in San Antonio.

Wheeler was born on May 22, 1929 in McMullen County and was a Texas A&M graduate. He earned his degree in Animal Husbandry in 1950 and in 1953 he married his wife, Bonnie.

They held their first sale on Tuesday, January 12, 1961. The Atascosa Livestock Exchange has been open for sales every week since. Although Wheeler bought out his partner in 1964, Schwertner continued to be a strong supporter and they worked together on several business ventures for many years

In 1973 Wheeler opened the doors on a new building that now houses the Atascosa Livestock Exchange. The new home was built just a few hundred feet away from its original location.

Son, Jim Wheeler, began working along with his father 30 years ago.

Wheeler and Atascosa Livestock Exchange have invested in the county’s future by supporting the Junior Livestock Show and Auction held each January.

He was inducted into the South Texas Cowboy Hall of Fame in 2002 during the annual Cowboy Homecoming ceremony held at the Pleasanton Young Farmers’ Rodeo. He was the president of the Independent Cattleman’s Association for over ten years, Director of the National Livestock and Meat Board, Director of the National Beef Industry Council, Director of the Texas Wildlife Association and a director for the Southwest Texas Land Bank Association. He also chartered the Atascosa National Bank. A stomach sleeper should use an ultra thin or flat pillow, preferably memory foam, as it minimizes the hazards of front sleeping. Stomach sleepers in need of a new pillow should look no further! Check our selections of the best pillows for stomach sleepers and make sure to read through our buying guide so you know what to look for when you shop! This pillow has many great features for stomach sleepers. Its inner core is memory foam, but instead of a solid slab of foam, the inner chamber of this pillow is filled with shredded foam.

In 2008, Wheeler was featured in a Pleasanton Express article in the Cowboy Homecoming edition.

He has received many awards from the FFA, 4H, Operation Orphan and other groups.

He is survived by his son, Jim and wife Cindy and three grandchildren and his secretary Janie Garcia.

He is preceded in death by his daughter Laura and his wife Bonnie.

Services are pending with Hurley Funeral Home in Pleasanton.