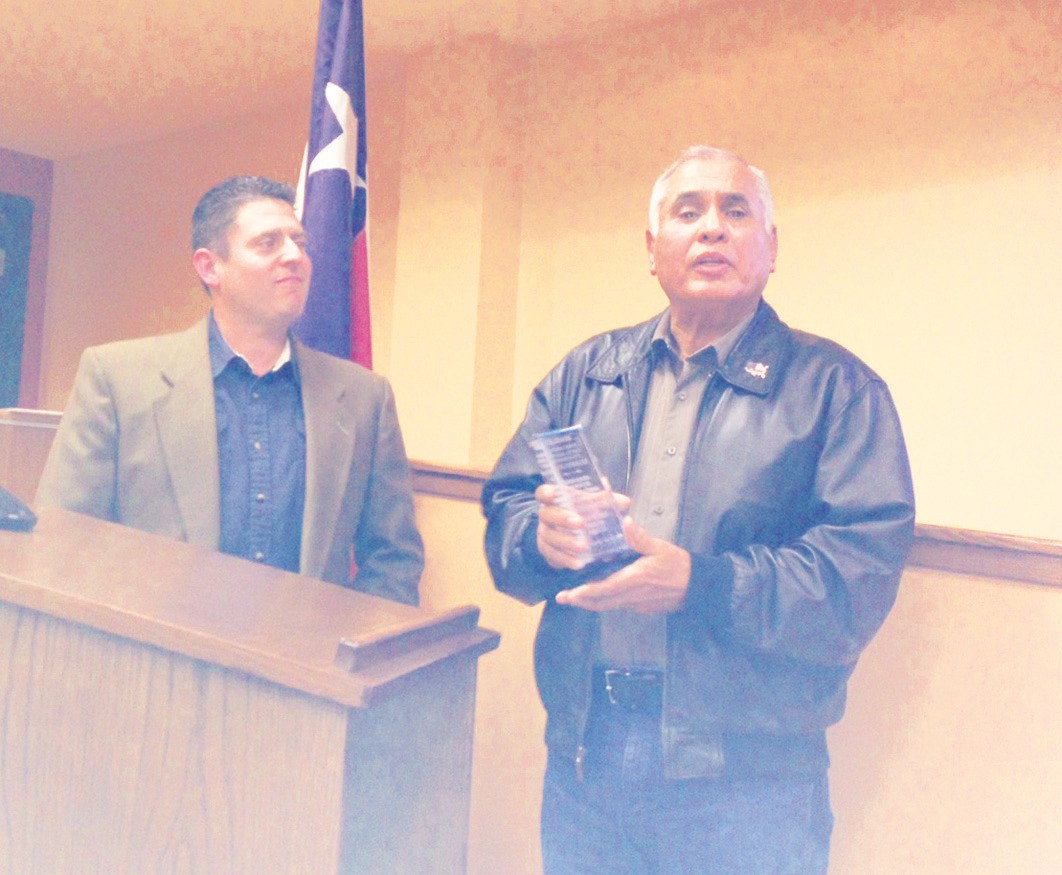 Joe Rodriguez, outgoing representative for Atascosa County Appraisal District, receives a plaque of appreciation from Mayor Clint Powell, council and staff for his dedication in representing the City of Pleasanton.

The Pleasanton City Council agenda was full for the January 15 meeting – the first meeting held since the December 4 regular session.

Scotty Smith from Cowboy Fellowship, gave the invocation and the consent agenda consisting of the approval of: the minutes from the December

A discussion and action item to adopt an ordinance for the operation of the City Park, City Pool and City Sports Complex was presented by Earl Peterson, Director of Facilities and Activities. It was passed unanimously.

Ronald Sanchez, Pleasanton Chief of Police asked the council to direct the city staff to bring an ordinance to the February 5 session that would prohibit registered sex offenders from living or loitering where children regularly congregate. J.R. Gallegos asked how this ordinance is different from the State Law. Chief Sanchez explained it mirrors the Texas law, as it addresses the parole/ probation violation. This would prevent registered sex offenders from being around areas where children are to congregate. The motion by Jeanne Israel passed unanimously.

Ordinance No. 15-1127 enacting the 2014 S-3 Supplement to the Code of Ordinance for the City of Pleasanton, Texas and declaring an emergency was adopted.

A first reading of Ordinance No. 15-1128 was performed revising the Parks Ordinance by adopting an ordinance for the operation of the City Park, City Pool and the City Sports Complex.

Two resolutions were read and adopted. Resolution No. 137-15 authorizing the submission of a Texas Community Development Block Grant Program application to the Texas Department of Agriculture and Resolution NO. 138-15 by the City Council of the City of Pleasanton, Texas declaring its Legislative Agenda for the Texas Legislative Session of 2015.

Three people were honored with appreciation plaques. Outgoing Atascosa County Appraisal District representative Joe Rodriguez for his many years of service. Also, a plaque was given to Dr. Cynthia Clinesmith for her support to the community as she steps down from her leadership role as Pleasanton I.S.D. superintendent. And, last but certainly not least, Judge Diana Bautista was honored for her service to Atascosa County as judge.

Alma Jones invited the council and those in attendance to the Pleasanton Friends of the Library event with noted ghost chaser and author Brad Klinge.

Johnny Huizar, Public Works Director reported that all water wells were operating at 100 percent. Repairs had been made on three water mains over the holidays. The new office for CASA is almost ready for them to move in.

Bruce Pearson reported that the processing of payments for the building rental can now be done without having to send them to the City Hall. The IT services are in place. He then recognized several members of the Pleasanton Police Department for their volunteerism for the annual Blue Santa Program.

The entrance sign rendering/ placement on US 281/First Street design was presented to the council by Lorene Tullos of Pleasanton ISD. The students had pitched the idea at an earlier meeting and ideas were brought before the council.

Award bid for street and utility construction materials was given to Atascosa Material for the price of $742,700. Though it was the only bid received, it was still competitive.

Construction Crew was also approved by the council.

A workshop was held prior to the council meeting with Steve Leuschner, a representative from Cardinal Badge Software Program. The software would be used with the Pleasanton Police Department and the Municipal Court System. Total cost is $115,755.60. The council approved the purchase.

Councilman Roger G. Garza brought up the item of increasing bulk water rates. It died for a lack of a second.

All bills were approved for payment and the meeting adjourned at 9:20 p.m. 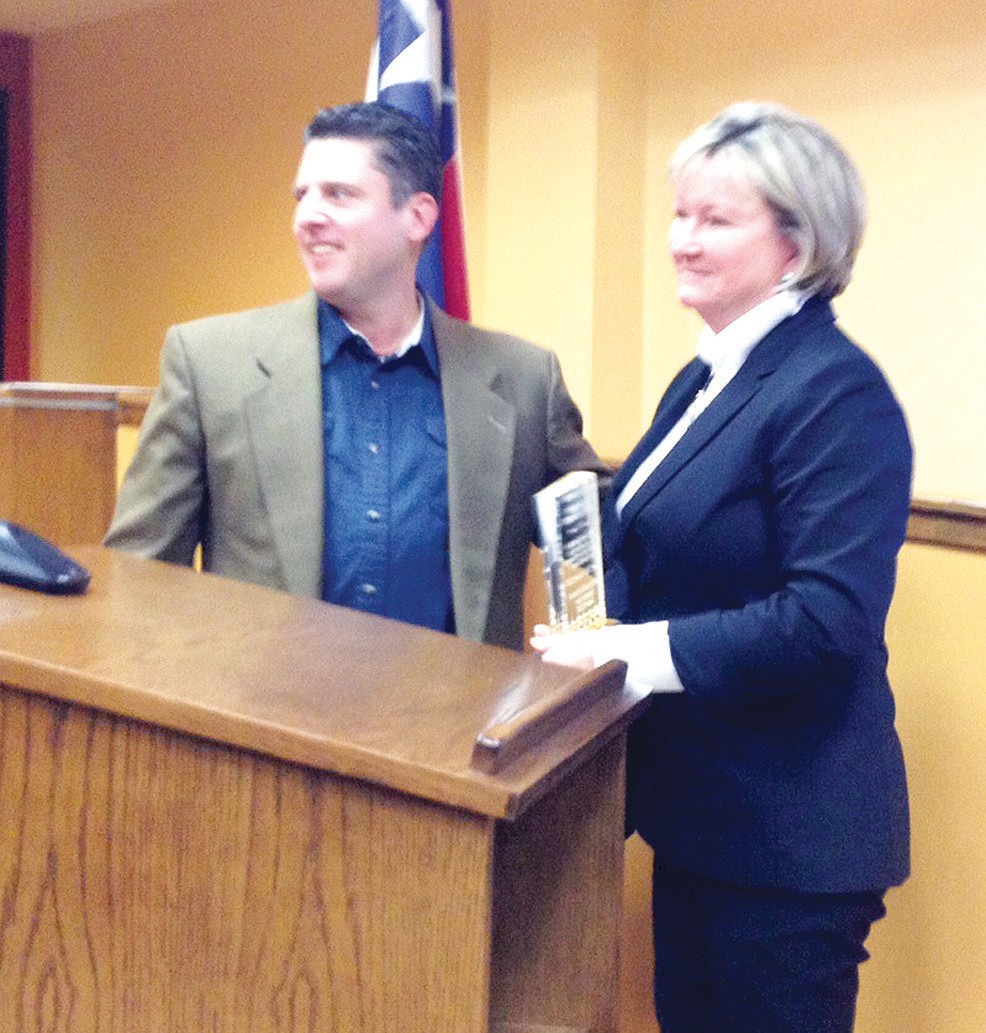 Dr. Cynthia Clinesmith receives a plaque of appreciation from Mayor Clint Powell, council and staff for her dedication and leadership for Pleasanton ISD and her involvement in the community. 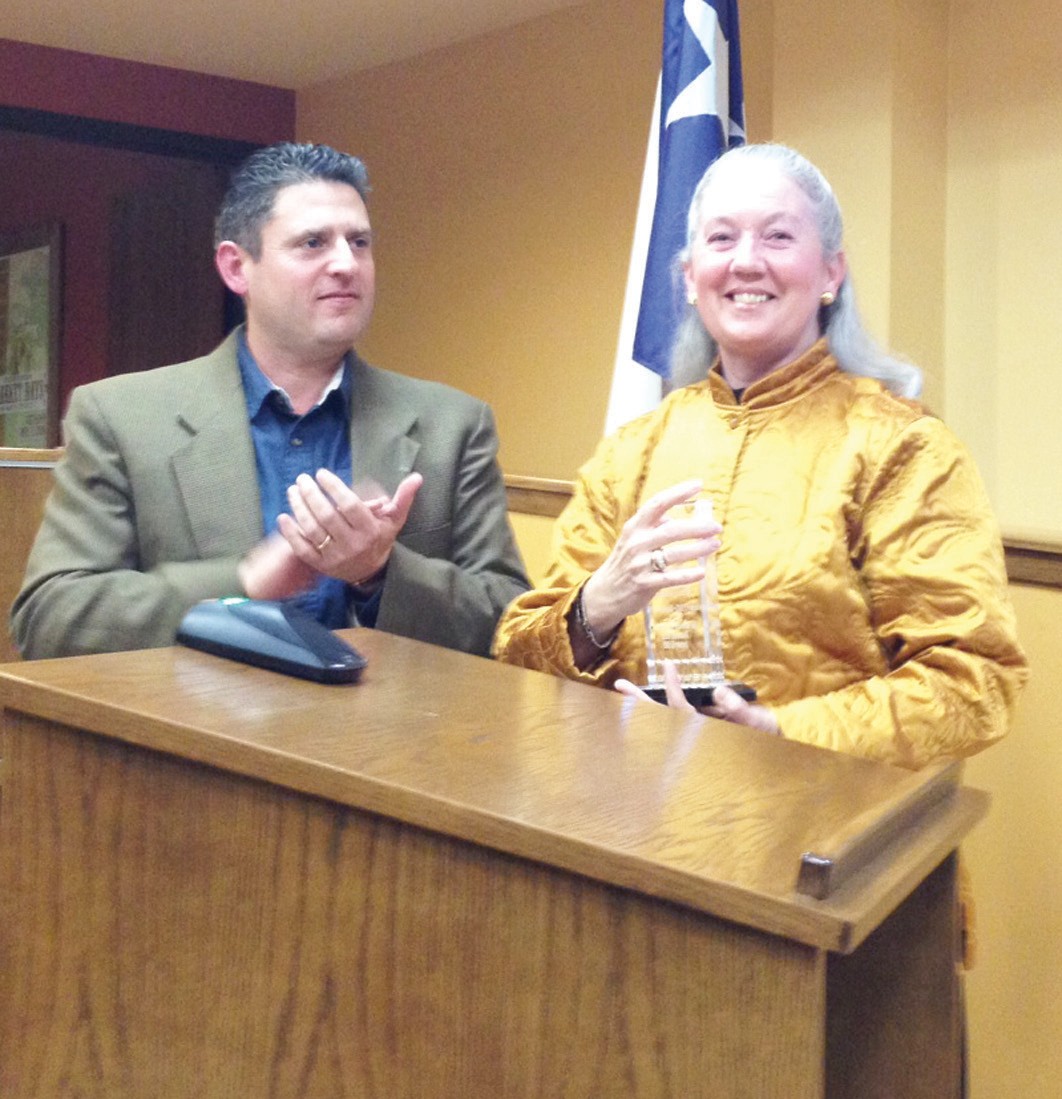 Mayor Clint Powell awards a plaque of appreciation to former Atascosa County Judge Diana Bautista from the council and staff for her dedication and leadership for Atascosa County and her involvement in the community.