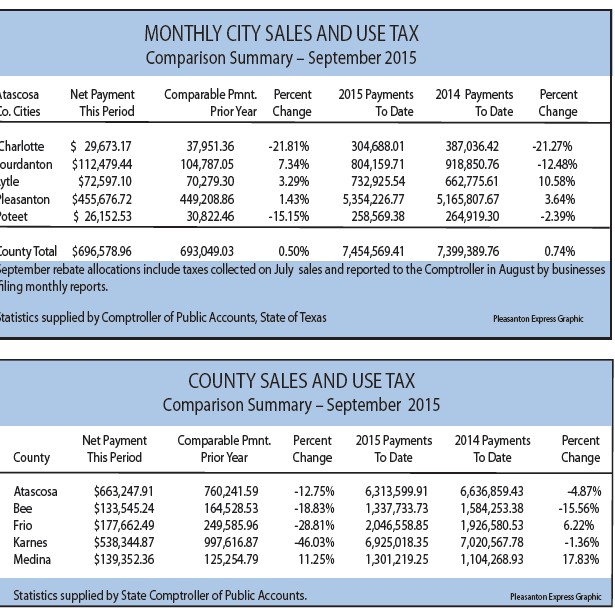 (AUSTIN) — Along with his monthly sales tax allocation announcement, Texas Comptroller Glenn Hegar today released totals for overall state revenues, as well as some of the state’s most significant revenue sources.

All Funds revenue for the year finished at $109.5 billion, 0.2 percent less than the $109.7 billion projected in the Biennial Revenue Estimate (BRE).

General Revenuerelated revenue was $52.6 billion, 0.1 percent ahead of the BRE projection of $52.5 billion.

Oil production and regulation tax revenue came in 4.2 percent above the BRE forecast, while natural gas tax revenue was 20.6 percent below estimate.

“State revenues for fiscal 2015 came in very close to the amounts we projected in January before the legislative session,” Hegar said. “As we predicted, the Texas economy has seen moderate growth despite weakness in the energy sector. The accuracy of our fiscal 2015 estimate provides a firm foundation as we begin to prepare the Certification Revenue Estimate.”

The primary purpose of the Certification Revenue Estimate (CRE) is to revise revenue projections following a legislative session, taking into account actions taken by the Legislature affecting revenue and final revenue numbers for the recently ended fiscal year. It also allows the Comptroller’s office to revise previous revenue projections and the economic forecast based on the most current information.

“The slight decline in sales tax revenue was due to reduced receipts from oil and gas-related sectors, offset by growth from other sectors,” Hegar said. “Higher collections from retail trade, restaurants and services indicated continued growth in consumer spending, while receipts from construction also grew.”

The sales tax figures represent monthly sales made in July by businesses that report tax quarterly.