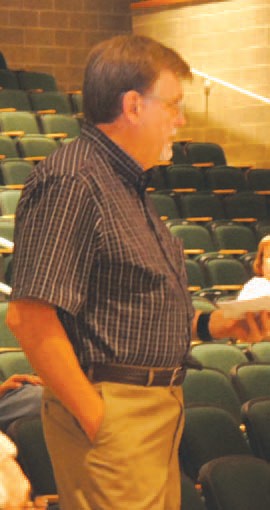 Resident and business owner Bob Hurley asks if the city has looked into the legality of tearing down the Dowdy’s and Williams Hardware buildings.

About 25 residents attended the first public input meeting on June 18, on the Pleasanton Community Center and Library project. The event was held at the Douglas R. Williamson Performing Arts Center, which is where the next meetings will be: Tuesday, June 26 and Wednesday, June 27, both at 7 p.m.

Pleasanton City Manager Bruce Pearson began the 1 1/2 hour meeting with a brief description of the three options proposed by the team of consultants: Option 1- As Is, Option 2- Partial Removal and Option 3- Complete Removal.Each option has both positive and negative points.

Pearson said he asked for the study to be done because the buildings have been sitting there for about four years.

In the building there are several different types of roof composite. There is some steel roof structure on the endcaps and varying types of wood structure.

Pearson noted that Option 1 is the most affordable, Option 2 preserves the superstructure the best and Option 3 allows for a brand new building.

If the city ends up deciding to rebuild, Pearson said the consultants briefly suggested to him changing the direction of the buildings (so that they face the Shell station across the street), so it would not have the sun bearing directly on the side. Some members of the audience expressed their displeasure of this idea throughout the meeting.

The first resident to speak was Bob Hurley. He said it was known from the beginning that the middle portion would need substantial repair. He also advised doing some legal work to make sure the council has the option to tear down the buildings and/or turning it.

“The referendum required the plan that was passed to be utilized, which was the remodeling of it,” said Hurley. “Has anyone looked into that?”

Mayor Clinton J. Powell said they have looked into it.

“From the city attorney, we can choose to do that. The reason we’re having this public hearing is to hopefully come to a common ground. Because of the way the referendum was written, it kind of tied our hands a little bit,” said Powell.

He continued, “After going through them and seeing the conditions of those buildings, it is really worth asking the question, ‘Shouldn’t we do something else?’ In my mind after looking at them, there’s no way… I feel like we’d be throwing away good money.”

Tearing down the buildings would be wasting a lot of taxpayers’ money, said Hurley. They would be tearing down perfectly good walls. Hurley added he has been a part of engineer’s reviews of those walls, inspections and gone through the buildings a number of times.

Mayor Powell asked if Hurley had done so recently and he responded yes.

Then Councilman J.R. Gallegos (Dist. 4) said, “Mayor, I have a comment. I don’t want to interrupt Mr. Hurley.”

“Well, you just did,” said Hurley.

Gallegos apologized and asked Hurley to go ahead, at which time he walked away from the microphone.

Gallegos went on to say that Option 1 and 2 do not offer any warranty on the buildings. If there are any problems in one-two years with the floors or walls, there would not be a guarantee. Gallegos said he just wanted to make that known.

Pearson reiterated what had been said at a recent council meeting, which is that placing new materials over an existing structure that is failing and aging would ultimately shorten the lifespan. He said Hurley was correct to an extent, but that what has not been compensated for is the structural cracks in the walls.

“The plans of July 28 call for a renovation, our attorney has said that is true. I think the purpose of the meeting was for the council, at the mayor’s request, to get input from the citizens on what they would like to see. The question was put to the counsultants, will the buildings stand the test of time, which is basically a 35-50 year time span, which is typical of community centers and libraries and they could not guarantee that,” said Pearson.

Patsy Troell spoke next and said she agreed with Hurley. The buildings have stood for many, many years and the architect worked with that, as they were advised to stay on a budget.

“All of these things, including the roof, were very well-known to us,” said Troell. “What I see is a matter of money. What are you going to ask the citizens to pay?”

She mentioned that if they turned the building, parking spaces would be lost.

More discussion followed on the topic of not including the proposed plaza at this time.

Art Troell also expressed that one could argue that the Alamo needs to be rebuilt. Regarding the cracks in the buildings, cracks can form in any buildings, said Troell. He added that new construction is not always best and the building facing the Shell station is not a good idea. Councilman Abraham Saenz (Dist. 2) commented he has toured the buildings and they should be torn down. Troell said he could see Saenz’s argument, but from a practical standpoint, new construction does not always work.

Rebecca Trevino also spoke on how you can look at many buildings in San Antonio and see that some new construction is not done as well as some of the old construction. The current structure will last at least 35 years, said Trevino. If the city said they wanted the citizen’s input, said Trevino, they already have it from the election held in May. Mayor Powell said that when the elections were held, they did not have all of this information from the consultants.

More discussion ensued on the different options and the costs associated with them. Option #2 is an eight percent cost increase from Option #1. Option #3 is a 26 percent increase.

Hurley spoke again, sharing that the theatre was built in 1949 and part of the NAPA building was built in 1928. He said he wanted to present some bids that the Community Center Inc. gathered and presented to council, which council sat on. He also said that if it is their heart’s desire to tear them down, they should tear them and rebuild them exactly where they are. Then they would have rebuilt the July 28 plans. The plans they were based on, said Hurley, he basically drew.

“It was $800,000. Isn’t that staggering? This council sat on it for four years and let that building deteriorate,” said Hurley.

“We didn’t have the money at the time, until we passed the certificates of obligation,” said Gallegos.

“We didn’t have plans in front of us until last year,” said Powell. “So I don’t know how you can have costs associated with something you don’t have plans on. We are where we are today. We have no other option now.”

Powell asked if the past can be left in the past and if they can just move forward, which received some applause. He also commented that they should be glad it was not built in the Industrial Park. Hurley said he agreed on that and if the center had been put in the Industrial Park, it would have been one of the dumbest things ever done. Gallegos responded that that recommendation came from the committee.

Hurley told Gallegos, “I’m addressing the Mayor, not you. You have no courtesy, sir. You’ve interrupted me three times.”

“As long as you continue to be rude, Mr. Hurley, you need to be interrupted,” said Gallegos.

Resident Marie Nachman commented that at first they wanted peanut butter and jelly and now everyone wants steak. Mayor Powell said that was not true and her analogy was wrong.

Mr. Troell said they needed better numbers to go off of. These numbers are not firm. Troell also questioned Pearson’s comment that architect Robert Guajardo had said the buildings should be new buildings. Pearson said there was a staff member present who could verify this call from Guajardo. Troell said he wished Guajardo was at the meeting. He also commented against turning around the building and Mayor Powell asked him to not bring it up again. Troell said they were having a frank, open discussion, which is what was needed.

Resident Judy Havins asked if they decided on brand new buildings, how long until they were completed. She was told eightnine months once they were demolished.

Sam Lingo of the Atascosa County Historical Commission (who said he was speaking for himself, not the commission), said the buildings were not energy efficient. He said the buildings have served their purpose, in his opinion. Lingo has been involved in some renovations. It is a complicated issue and he understands what they are going through.