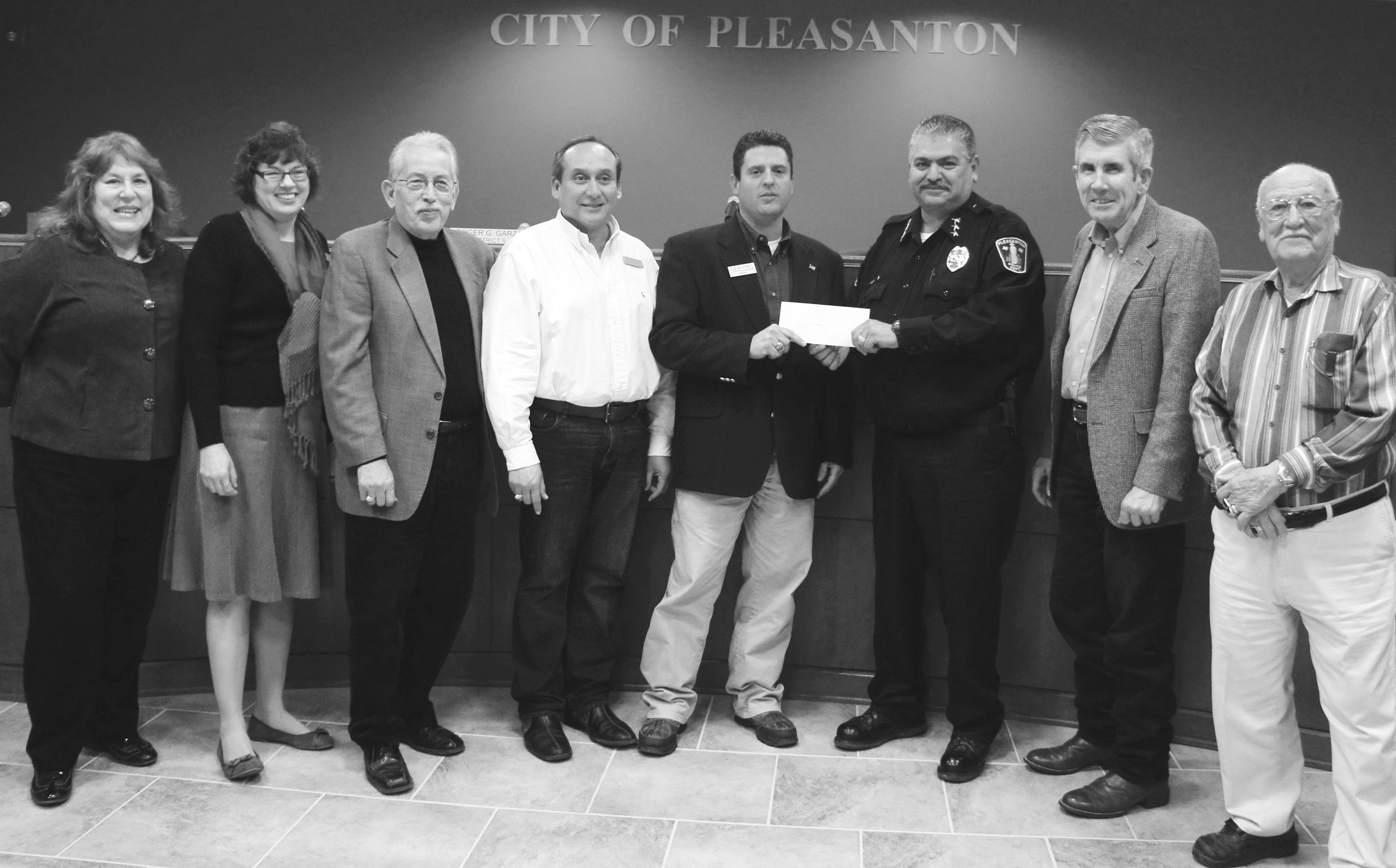 The City of Pleasanton announced the retirement of K-9 officer “Lady,” at the regular meeting on Jan. 17.

Police Chief Ronald Sanchez said it is a pinnacle moment when an officer reaches a point where he or she can retire. Lady served with the Pleasanton Police Department for eight years and has recovered a significant amount of narcotics and currency for the department. Sanchez added they hate to see her leave, but she has had some medical issues. The vet and her original trainer agreed it was time for her to enjoy a life of relaxation.

Jourdanton Police Officer Joel Chavez, who used to serve with the Pleasanton Police Department, was her last handler. He had been away from Lady for the last three months, but Lady still listens to him, said Sanchez. When the issue of what would happen with Lady came up, Chavez stepped in and said he would like to keep her. This was very much appreciated, said Sanchez, as well as Lady and her eight years of service.

Chavez first thanked former Police Chief Gary Soward for giving a rookie such an opportunity. He said he was on the police department for nine months when Soward asked Chavez if he wanted to be a K-9 handler. Chavez had initially told Soward he wanted to take care of one of two things: gangs and narcotics.

Some may not be aware, said Chavez, that in 2011 Lady developed a medical condition that made her minutes from dying. City Manager at the time, Kathy Coronado, made a bold decision to have an expensive surgery done. This saved Lady, but then she had to go through 6 1/2 weeks of rehabilitation.

Seven weeks to the day of her surgery, explained Chavez, the department and other agencies took on a narcotics operation in Atascosa County. Although state and federal agencies were present, Lady was the only K-9 officer used in the entire operation that actually located narcotics, said Chavez. Lady located 15 pounds of cocaine. This was valued at half a million dollars.

“I’m very grateful that Chief Sanchez and Captain Johnny Gonzales allowed me to go ahead and take Lady. I want to thank City Manager Pearson for being involved in the decision. It’s been an honor serving as a K-9 handler and I know that Lady is excited. She’s looking forward to watching Animal Plant all day now,” said Chavez.

After the announcement, City Manager Pearson said he and Police Chief Sanchez had been discussing continuing the K-9 program, since it has been successful. Pearson said that Lady was purchased about eight years ago with a private donation by local citizens. Pearson and Sanchez met with one of them recently. When this person learned how the city wanted to continue the program, they said, “Let me know when you need a check and how much it is.”

Police Chief Sanchez said they received a private donation of $8,000 so that the K-9 program can continue. It was very important to this person that they remain anonymous. Another K-9 handler will be needed and Chief Sanchez explained that nearby Somerset has an excellent training center. That center trains dogs that are sent all over the United States and the world. 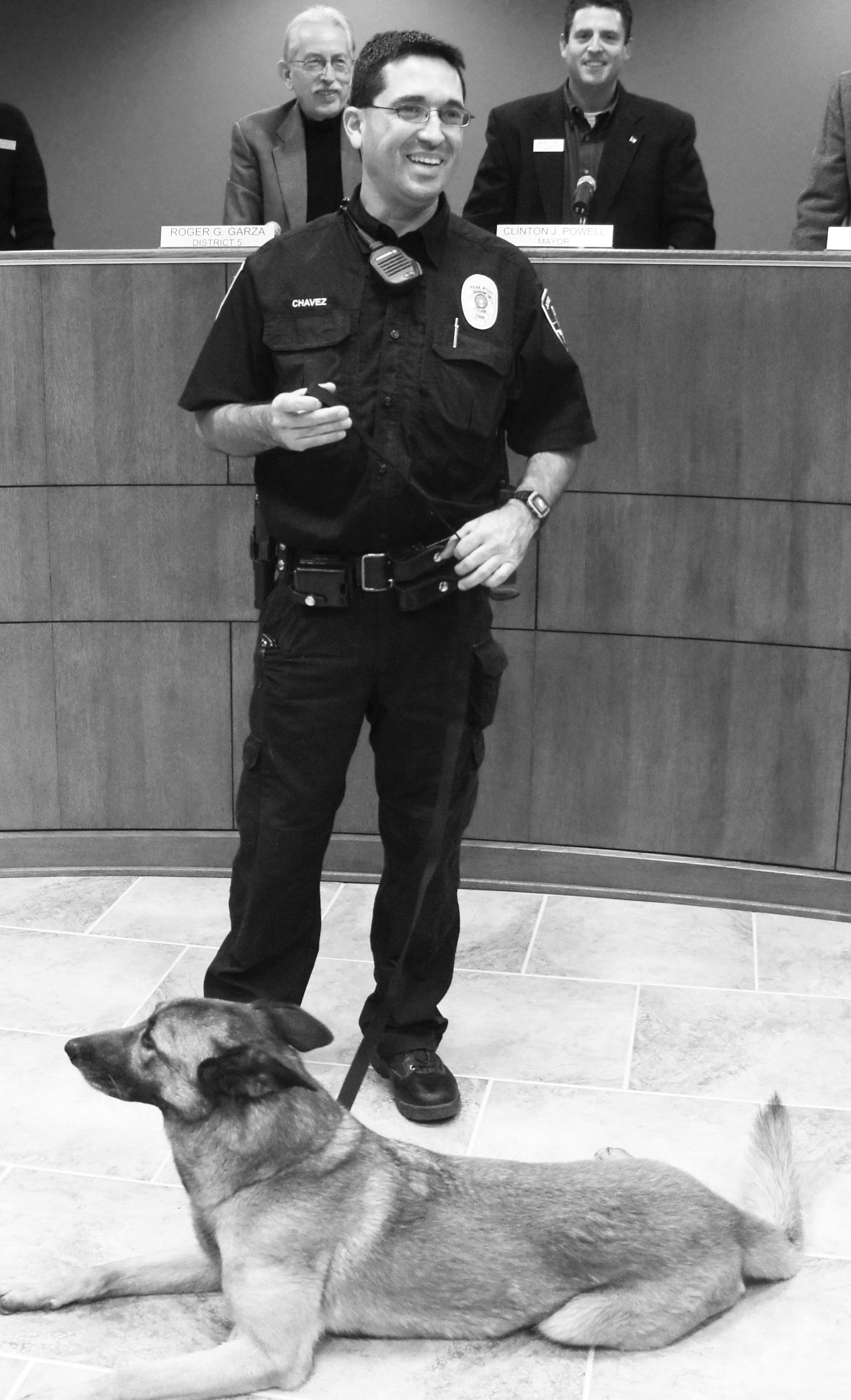 Jourdanton Police Officer Joel Chavez, formerly of the Pleasanton Police Department, shares a few words on the retirement of Lady, the K-9 officer.