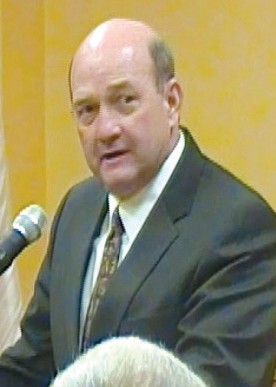 Pleasanton City Manager Bruce Pearson addressed the council and those in attendance to forget the past and to focus on working together at the end of a lengthy meeting last Thursday evening.

City Manager Bruce Pearson called upon the City Council and the citizens of Pleasanton to move forward and forget the misdeeds of the past in the April 19 City Council meeting.

“Let’s come together,” Pearson said. “Let’s let our citizens vote. Let’s not discuss issues about posts and right aways although they are important to these folk,” the city manager said pointing to some council members. “Let the staff carry out the policies the council has set. If the council wants to change those policies like I told you in that meeting I will carry out whatever policies it is you have set,” Pearson continued. “I am here to install and carry those policies out whether I agree with them or not. But let’s let the past go.“

Pearsons’ five minute address to the city council, the steering committee and the citizens of Pleasanton was direct and to the point. There was only one lighthearted moment and that was when Pearson first approached the podium to speak. Pearson knowing the tenor of the words he was about to speak said cautiously but with a smile that he realized he was a new comer and that he was on probation. Laughter filled the room but Pearson wasted no time in sharing his opinions with the audience about the contentious issue of street closure on the 100 block of Main Street. Pearson said that when the council first visited with him that they wanted to know what he thought about crucial points. Pearson said, “You know what I think. I am going to be ashamed to go home tonight to be a member of Pleasanton and I think there are a lot of people sitting in the audience and behind that dais who feel the same way.”

Referring to the city council and the steering committee, Pearson said,”I am going to tell you that everybody has some flesh in this game and some responsibility from what I have seen. And, I think after three months and two weeks I can be objective. Shame on the committee for not reporting more to the council. Shame on the council for not asking the committee to come to report more. The council is the governing body of this city. You have the right to ask any committee, disband any committee and request that the consultant be at the city meeting. If they don’t show up, get rid of them. It is as simple as that. Everybody has some flesh in this. To revisit what has happened in the past is not going to help any of us,” Pearson continued. “There are people laughing at us right now. There are people who have laughed here tonight,” Pearson said referring to the packed city council meeting room.

Pearson said that he came to Pleasanton because it had broad shoulders. He said that Pleasanton has stood by itself and depended on no one. He continued by saying that the city has great leaders in the community and that everyone should be proud of that fact. “Whether the street stays open or whether the street closes democracy’s voice will be heard,” said Pearson. He said that he has heard both sides and does not feel qualified as a public servant or private citizen to say what is right. He explained that having lived here only three months that he does not understand the history or the heritage of 100 Main Street. A council member had asked Pearson that if the street were to close who would want to sit on the plaza and smell diesel fumes or the roar of the engines. Pearson commented that was a valid point. He added that he heard from another that the plaza would look good and signify and identify the Hispanic heritage that is so rich in this city. Pearson added that he too thought that would be good.

“So you know what it boils down to is that if it is going to be closed it will be used by the people who want to use it.” Pearson said. “And, if it it stays open it will continue to be used by the people who continue to use it. Let’s come together. Let’s forget the past. Let’s stop drumming up. Council you are the governing body of this city. You have every right in the world to call any committee in front of you and any consultant in front of you. Take the reins of this project. Let the staff and the consultants work with you after the people’s voices have been heard. Let’s not go back to the past. Let’s not revisit those days. Let’s work together.”

The decision to keep the 100 block of Main Street open or closed will be decided by the citizens of Pleasanton when they go to the polls to vote on Initiative #1 and Initiative #2 in the May 12th election.