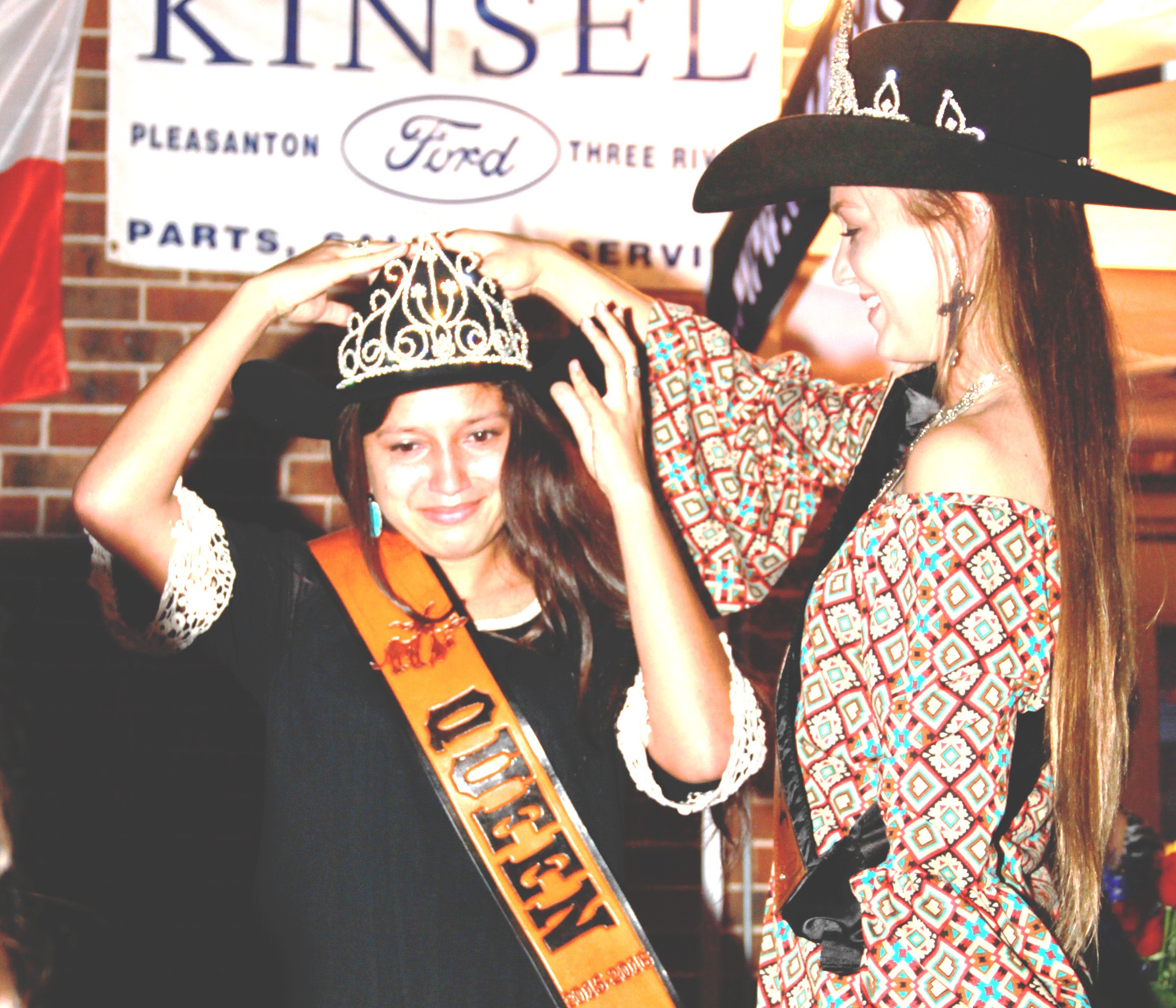 The misting rain didn’t thwart the plans for the Cowboy Homecoming queen’s coronation on Thursday evening at Kadobe’s. The highlight of the night was when Jordyn Olle, 2014-15 Cowboy Queen crowned and sashed the 50th queen, Cassidy Fernandez. She, along with her court members Princesses Skylar Alexander, Larissa Gomez and Zoe Mangum and Chamber Duchess Kyla Llamas will represent Pleasanton throughout the year. Little Mr. and Miss Cowboy Homecoming Austyn Partida and Payton Garza received their sashes and crown, too. They assisted by helping pass out the flower bouquets provided by Lesley’s Flowers and Gifts.

The tractor pull, though a bit soggy, went off as planned as a steady light rain fell off and on. By the time the music started with Gabe Garcia, the rain had subsided.

The crowds that usually gather for the popular band, Intocable, were weather shy for this event. Reports of between 1,000 and 1,500 dedicated fans showed up to a great concert.

Late Friday evening, it was decided that the parade would be canceled.

The forecasters kept reporting that severe weather was on its way last week. Though they were wrong on two of the days, their prognastication proved true early Saturday morning.

Reports of over three inches of rain by 5 a.m. Saturday worried the 37th annual Wild Bill Cowboy Gallop crew, but there seemed to be a few hours respite, and 63 diehard runners and walkers showed up to participate. Over 90 had signed up to brave the weather, several of them that morning.

For the first time in 50 years, the event was canceled due to weather.

At around 10:30 a.m. on Saturday afternoon, the Atascosa Emergency Management posted on their Facebook page that Cowboy Homecoming was canceled and the park was closed and evacuation was necessary.

The Chamber’s Facebook post broke the news at 2:17 p.m. “We sadly report that due to significant rain and flooding, our Police Department has closed the River Park. They do this with the utmost concern for the safety of our citizens, as the threat of heavy rains continue and river water continues to rise. We are so gracious for the support of our sponsors, our numerous volunteers, and our guests who attended the events we were able to host. We are blessed by the rain, but wish Mother Nature would have held off for another day. Stay safe!”

“Coming off the recent tragedy in Wimberley, chances didn’t need to be taken,” said Cox.

Strange added, “There may be plans to reschedule some of the events.”

Questions about the event should be directed to the Pleasanton Chamber of Commerce at 830- 569-2163.