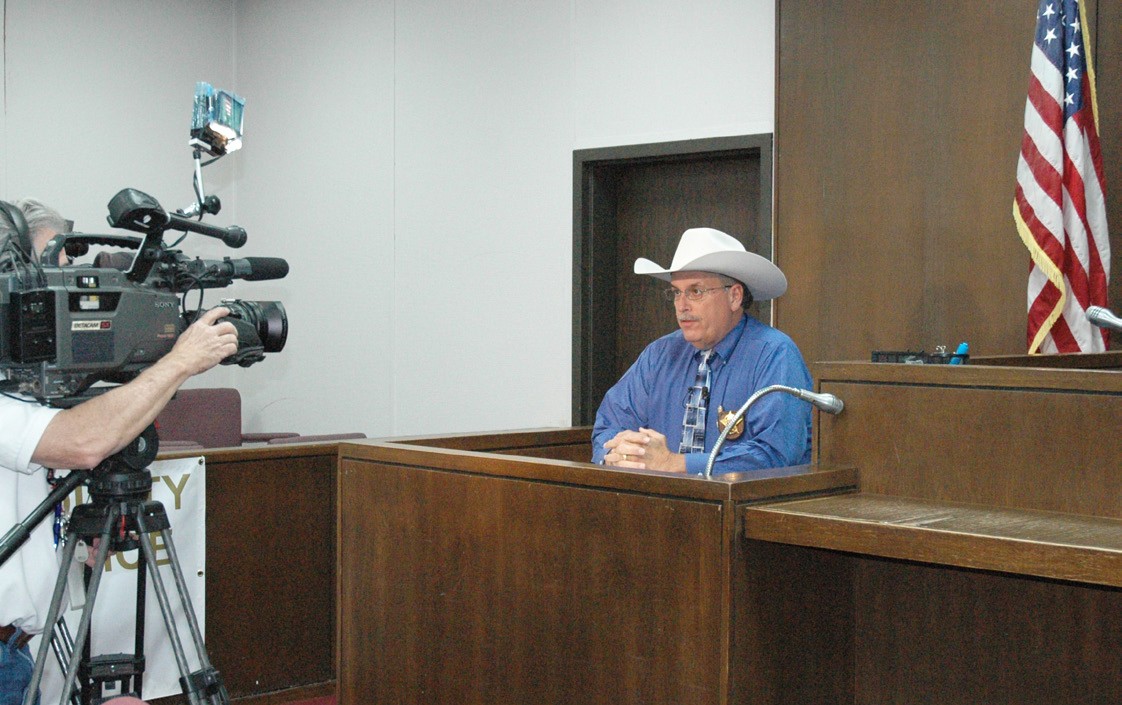 In a press conference Thursday held at the Atascosa County Sheriff’s Office, Sheriff David Soward issued a statement regarding the case of Bill Bohlke, former Hollywood Park Mayor, who was found dead on his ranch in August, 2012. The Atascosa County Sheriff’s Office investigated the death and found that Mr. Bohlke died due to an attack by a 500 lb. aggressive donkey.

Bohlke’s body was found by his family on the 200 acre farm he leased off Coble Road near Poteet in Atascosa County. Chief Deputy Soward reported that Bohlke’s truck was still running and the driver’s door was open when he was found. He was about 50 yards away from the truck under a trailer with irrigation pipe. According to Soward, the animal had apparently knocked him down, stepped on, kicked and bit him.The donkey had a history of being aggressive and a jenny in estrus was nearby. The death was ruled an accident and heart failure may have also been a contributing factor.

The family began to have doubts about the cause of Bohlke’s death. They requested that Bohlke’s body be exhumed alleging that he may have been murdered. The family hired an independent forensic specialist, Dr. Gary Deegear, who said he found no evidence of what would be expected of an animal attack.

In a press conference today held at the Atascosa County Sheriff’s office, Soward stated that the case remains closed. He said that he has always remained confident in the initial investigation, but decided to take an extra step. Following is Sheriff Soward’s March 20 statement:

“A few weeks ago, in the interest of justice, I asked a forensic expert to review our case on the death of Bill Bohlke. Earlier this week, I received the results of the forensic expert’s findings.The expert is Dr. Vincent Di Maio, former Bexar County Medical Examiner. Dr. Di Maio’s conclusions after reviewing all the evidence, photographs and reports, is that Mr. Bohlke was attacked by the stud donkey which inflicted the injuries observed on Mr. Bohlke’s body, including the bite marks on his arms and the hoof print contusion on his back. Dr. Di Maio stated that it was in his opinion that Mr. Bohlke attempted to fight off the donkey based on what he observed. Dr. Di Maio also concluded that Mr. Bohlke was able to get under the trailer where he was found lying on his side using his hands for a pillow. He also thought it was highly likely that Mr. Bohlke died as a result of his heart condition rather than the actual injuries inflicted from the donkey.”

“This case was closed a number of months back after we completed a thorough investigation and we have never received any new evidence of any kind in the case. As far as this office is concerned, the case remains closed.”

“We realize how difficult this tragic death has been on the family and we certainly sympathize with them. But I also want to assure you that this case was taken very seriously by the Atascosa County Sheriff’s Office since the very beginning. Every effort available was made by our investigators to learn the truth. We are fact finders. We must make our determinations on facts and evidence. If we had seen anything that indicated there may have been foul play involved or that another human being had been present that day, we would still be diligently working this case. But, that is just not the case. The evidence is clear The case remains closed”.

Sheriff Soward stated that the decision to hire Dr. Di Maio was made about three weeks ago. Soward stated that technically the case has never been reopened. “We hired Dr. Di Maio in the interest of justice based on all the untruths being put out in the media,” said Soward. “We have someone with forensic expertise, Dr. Di Maio being world-renowned in my opinion was the person for the job.” Dr. Di Maio, a veteran of the U.S. Army Medical Corps has more than 40 years of experience as a forensic pathologist. He attended St. John’s University and Duke University and served as chief medical examiner of San Antonio until 2006. Di Maio is also a fellow of the National Association of Medical Examiners and the American Academy of Forensic Sciences.

Soward said that he is surprised that a case that was closed in 2012 was now being asked to be re-opened. However, he said that he feels deeply for the family. “I understand that a family is suffering a tragedy over the loss of a loved one,” said Soward. “You do not know what people go through until you go through that yourself.” Soward said that he cannot put himself in the Bohlke’s shoes. He said, “I can only do what our job is and I think we adequately did that job”

Soward explained why an autopsy was never performed. He stated that the Atascosa County Justice of the Peace called out to do the inquest ordered an autopsy. “She called the Bexar County Medical Examiner office at that time,” said Soward. “They said we are full and have no room to take anyone else and refused to take him.” Soward said it is unfortunate, but that is what happened. He mentioned that it so happened that the Texas Ranger stationed in Atascosa County was observing an autopsy at the Bexar County Medical Examiner’s office the night the phone call came in. He said he heard the phone call exchange between the medical examiner’s office and the the Atascosa County Justice of the Peace.

Soward said that exhuming the body had been discussed. “If there was any doubt that this was a homicide then yes we would be leading the charge to exhume the body,” said Soward. “But, we have nothing whatsoever to indicate that. The evidence was clear that this was an animal attack that caused his death.”

Soward reiterated that no new evidence has come into his office. He said that seven months after Bohlke’s death, that the Texas Rangers received a phone call from a family member who said that Bohlke was meeting with two men regarding a cattle transaction on the day of his death. The Texas Rangers told Soward that they asked this family member for more details. However, they did not have any specific information about the men or the meeting to provide.

Bohlke was a retired Air Force Major serving 20-years. In May, 2012 during his first bid for public office, he was elected Mayor of North Hollywood Park, a South Texas suburb North of San Antonio. Bill Bohlke’s family counts among his accomplishments several medals from his time in the Vietnam War and positions in the San Antonio River Authority He is survived by his wife Tonia, daughter Amber (Bohlke) Perry, sons Christopher Bohlke, and Brian Bohlke, their spouses and three grandchildren. Bohlke’s body was buried at Fort Sam Houston National Cemetery.