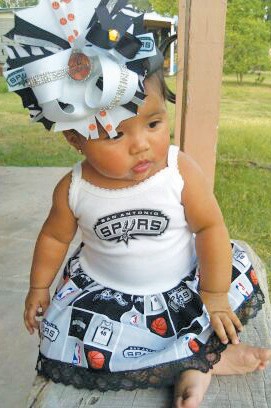 She’s the biggest little Spurs fan in South Texas and never expected it. Six-month-old Jazmyn Coronado was the collector of over 57,000 “likes” on the Pleasanton Express Facebook page.

Being that most in the Pleasanton Express office are giant Spurs supporters we started asking for fan photos from our readers on Facebook. We’ve received quite a few, but never thought we would get a response like we did to a photo of a sweet little girl in her Spurs gear.

Jazmyn’s uncle, Zach Garcia, submitted the photo that his sister, Jazmyn’s mother had taken the first week of the NBA Finals.

Elena thought the photo might receive about 200 “likes”. She and Zach were both surprised by the amount of attention Jazmyn’s photo acquired.

“Even Heat fans were adoring her,” Elena says of the comments posted to her little girl’s photo.

Now not all the comments were complimentary. Apparently, everything IS bigger in Texas including hair bows. We had a lot of comments from out of state that just could not understand the bow. Many were asking why it was so big, was it heavy, does it hurt her. Of course, it’s not heavy and doesn’t hurt.

On the contrary, we did have plenty of Facebookers asking where the Spurs dress was bought and if they could get it in different teams. Elena purchased the dress at Picapica Plaza on Military Drive in San Antonio and as for that great South Texas bow it was made right here in Pleasanton at Creative Designs located on Goodwin Street.

We do expect the photo’s “likes” will increase again when/if the Spurs won last night. We were too close to press time to have the final score. Let’s hope we are celebrating the Spurs fifth Championship this morning. Go Spurs Go!