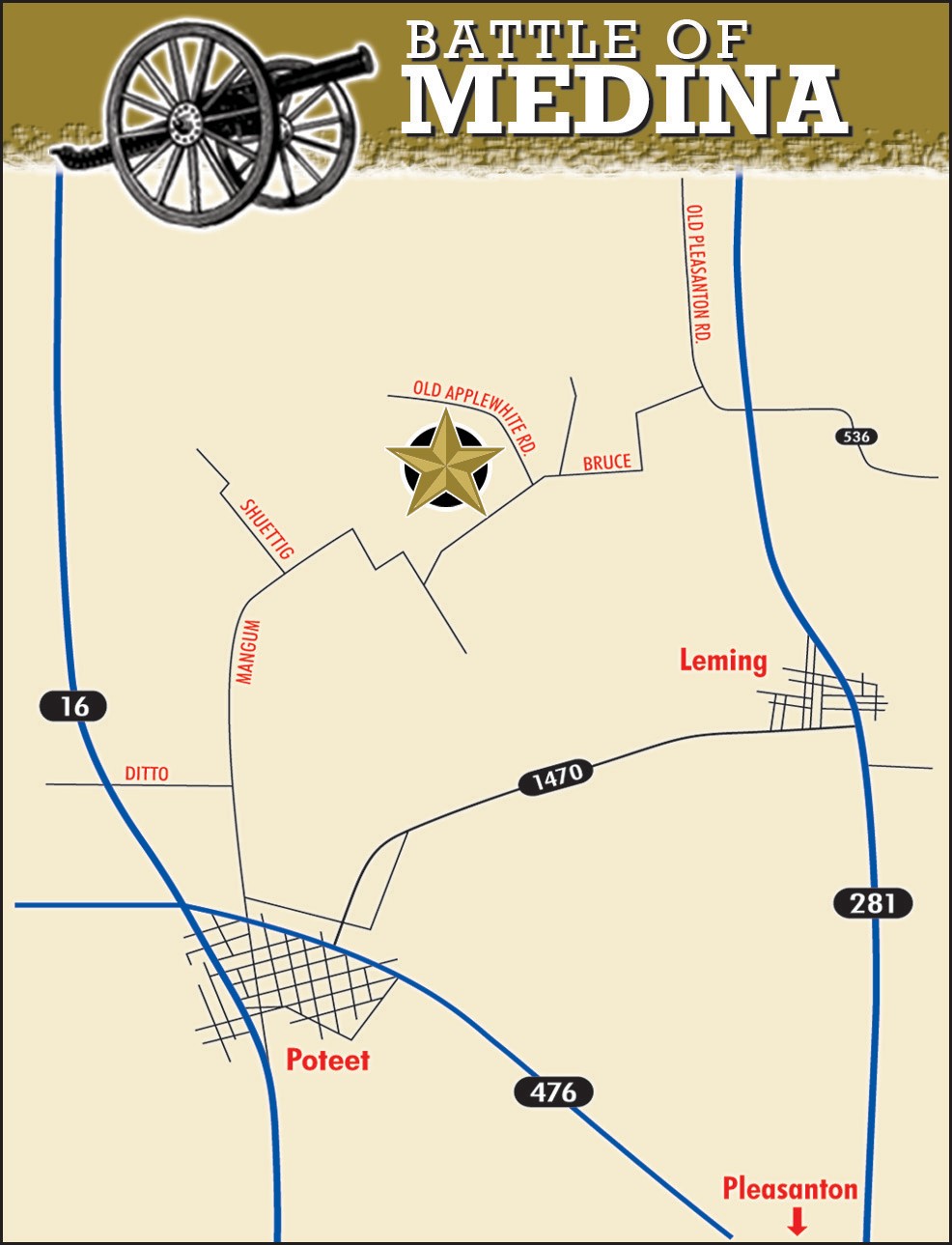 A ceremony honoring the 201st anniversary of the Battle of the Medina will be held next Saturday, August 16 at the site at 10 a.m. A seminar will be held at the Pleasanton Church of Christ.

The public is invited to attend our 14th annual ceremony commemorating the Battle of Medina, this being the 201st anniversary of the bloodiest battle in Texas history! The Battle of Medina occurred on August 18, 1813 between the Royal Spanish Army and the Republican Army of the North when between 800 and 1,300 Americans, Tejanos, Indians and Spanish soldiers died in this all but forgotten battle which historians have named the Gutierrez- Magee Expedition.

Since August 18 is on a Monday this year, we will hold our normal commemorative ceremony beginning at 10 a.m. on Saturday, August 16, 2014 under the large Oak trees on Old Applewhite Road.

A Color Guard representing the U.S.A., Spain, Texas and Mexico, plus descendants of the men who fought and died in this battle will be presented. In addition this year, members of the Buffalo Soldiers Association, who promote their history all over the state are expected to attend. Due to the heat, an effort will be made to keep this ceremony as short as possible, and adjourn to the nice cool Church of Christ located at 1003 North Main Street in Pleasanton, for an afternoon seminar beginning at 1 p.m. on Saturday afternoon, August 16, courtesy of Norman Porter, Atascosa County Historical Committee Chairman, and his church.

The speakers this year will include Frank de la Teja, PhD. the former State Historian and History Professor from Texas State University; and Dan Arellano, who has organized the Battle of Medina Association. A new speaker this year is William “Bill” O’Neal, who is the current State Historian of Texas, appointed by Governor Perry. Bill O’Neal will speak on Manifest Destiny and the Gutierrez-Magee Expedition. The feature speaker this year is Caroline Castillo Crimm, Ph.D., Professor of History at Sam Houston State University History Department. Dr. Crimm spoke last year at the 200th anniversary seminar, and you will not want to miss what she has to say about this all but forgotten event in Texas history.

Also expected in attendance is Doc L’Harrison from Louisiana to speak again this year, and tell us what he has found about the men from Louisiana who came to fight in Texas.

Robert Thonhoff, Teacher, Administrator, County Judge, and award winning author; who spent years researching this all but forgotten battle is always invited. However, due to health reasons, Professor Thonhoff probably will not attend.

If it were not for Bob Thonhoff most of us would not even know about the Battle of Medina.

Direct descendants of Peter Sides are eligible for membership in the

Daughters of the American Revolution (DAR), Sons of the American Revolution (SAR), Daughters of the Republic of Texas (DRT) and Sons of the Republic of Texas (SRT) and descendants directly related to any of the 3,200 men who fought in this battle on either side are eligible for membership in the DRT and the SRT.

Over the past 14 years the SAR, DAR, SRT, DRT, Mayflower Society, the Daughters of the War of 1812, and descendants of the men who fought here have dedicated markers to the men who fought and died in this battle, and these descendants will rededicate their markers at the Saturday morning ceremony under the large Oak Trees. Everyone interested in history is invited to attend.

The afternoon seminar will begin at 1 p.m. Saturday afternoon at the Pleasanton Church of Christ, located at 1003 North Main Street, Pleasanton.