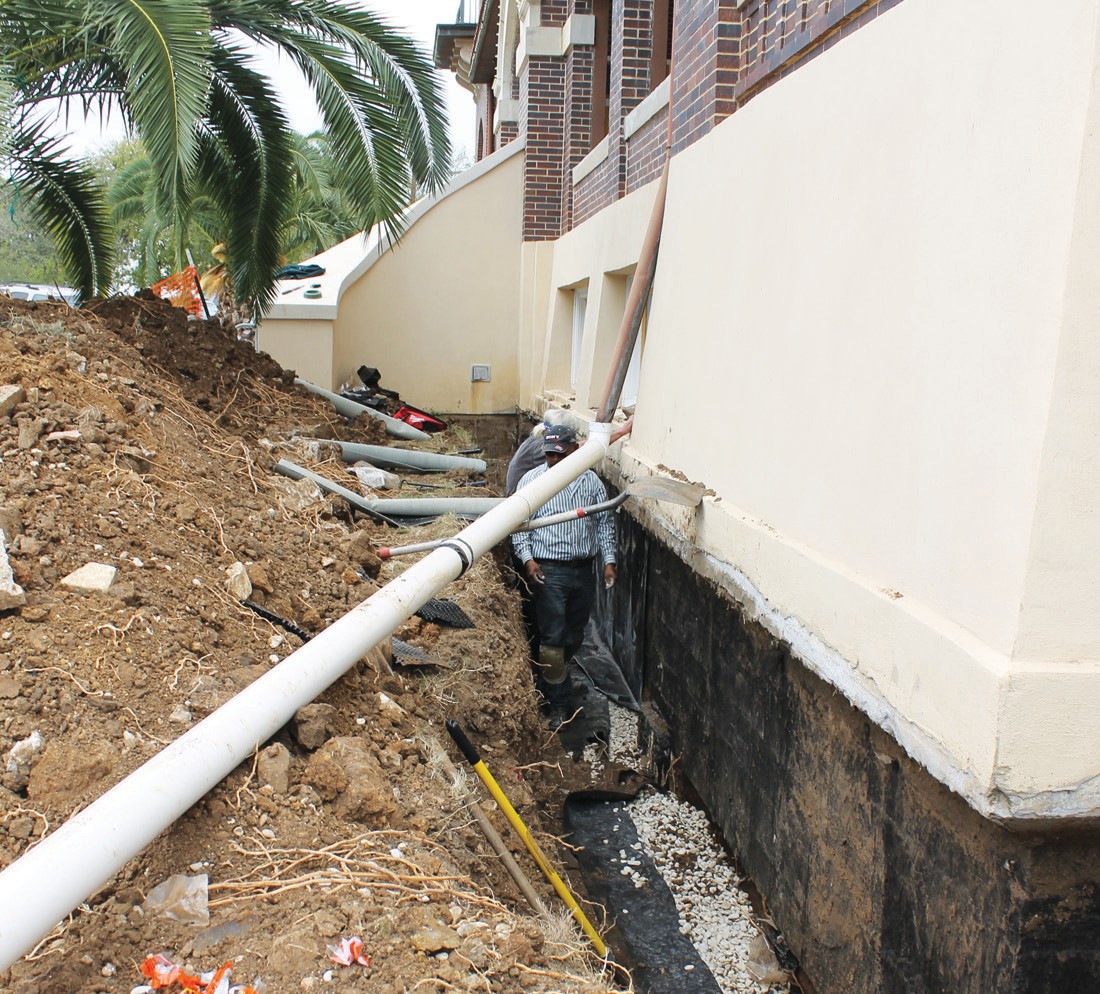 Work being done alongside the west side of Atascosa County Courthouse where a moisture barrier will be inserted.

Citizens entering the Atascosa County Courthouse building are seeing a lot of trenching and moisture barrier work being done around the historic building. It’s all part of a process in necessary maintenance.

Precinct 1 County Commissioner Lonnie Gillespie, who offered to work out the necessary repairs at the courthouse, said “The attorneys’ office at the courthouse has been showing signs of water damage and this has been gradually increasing for the past couple of years or so. One thing led to another and with the county budgeting for another assistant attorney next year, and deciding that we needed extra room, we moved everybody out of the attorney’s room. With water damage and mold and so forth, we decided we needed to get the problem fixed. To solve the problem of water leakage underneath the ground surrounding the building, we decided to repair the outside wall of the entire courthouse, underground. There were some moisture problems in the basement portion of the County Clerk’s office where records are kept. There’s concern about damage to these records. That further warranted a complete job around the building.”

“Work began on the side near the clerk’s office. What they’re doing is digging a trench next to the building and applying a moisture barrier to the wall – it has something called Bentonite in it. It’s a product that is made of a real durable, hard plastic. Bentonite is the part of this material that goes up against the concrete wall of the courthouse. What this material does is, when it gets wet, it turns to a gel that, basically, forms a barrier where water will not penetrate it. That was what was recommended by the contractors who know what they’re doing – so, we’re going with their recommendations. This form of Bentonite was the same product used at the Bexar County Courthouse, too. We’re using the same subcontractor who did the job at that location, being Bill Burkett of Burkett Waterproofing.

Wells Construction is the general contractor, having the insurance and bonding. That gives us somebody local, doing the overseeing of this project with someone on site throughout the job.”

Comm. Gillespie continued, “This is being paid out of the county’s building and yard account where there is a certain amount budgeted every year. This particular project came out of that account and as long as it costs under $50,000.00, the legislature says we don’t have to put it out for bids. I did my own research and was told our bid of $49,500.00 was a very good bid for this type of undertaking and that we would find it hard to find a bid for less than that amount. They started on the project on October 12 and the work should be completed in about another two weeks. They’ll reseed the entire area after the palm trees, that are the culprit, have to be removed. Roots from the palms have been determined to be responsible for the eroding of the ground around the courthouse understructure. We can’t afford to let that happen again. Without the removal of the palms, we’d be in trouble from now on out. There are eight small and the same number of large palm trees at the courthouse. With the records in the clerk’s office, we can’t afford to see damage down there. We’re going to make the courthouse entrance grounds solid carpet grass. We found out that any type of shrubbery could be a problem in the future with the roots and all. We may replant those palms somewhere else away from the building.”

“We have to look at the integrity of the courthouse as much as we look at the entrance part of it. The courthouse has been here 100 years and we look to the next 100 years it’s here. You have to look at the future for this historic building. We had the project approved by a local historian, Norman Porter. Also, I had it approved by the Texas Historical Commission. I spoke with Atascosa County Judge Diana Bautista and she approved of it. I showed the plan to every one of the commissioners at separate times. I showed them, one by one, what the problem was and we agreed that the palms had to be taken out. This is the start of a small renovation of the courthouse. The courthouse went through a major renovation in 2001 through a grant overseen by the Texas Historical Commission. Everything we do to the courthouse has to be approved by them. So, we’ll work, carefully, in anything we do. In the near future, some painting needs to be done around the windows. We’re starting at the foundation with the current project and then it’s on to the structure. There are some roof problems, also, but we’ll begin with windows and there’s some plasterwork needed around the concrete inside. We’re looking at a project that may cost us $100,000.00 to $150,000.00. This is preventive maintenance – that’s what it is. After the first of the year, we’ll be in another budget cycle, so we’ll be using those funds to further do things to the courthouse that need to be done. We’ll finish up the moisture barrier this year. We’ll start working on the other parts after the first of the year. The Atascosa County Courthouse is going to be as beautiful as it ever was and this is just taking steps to keep it that way in the future.”

There’s an ongoing project where the trenching phase is being done to accommodate a moisture barrier to be inserted alongside the wall at the Atascosa County Courthouse in Jourdanton Pictured, from left, Bill Burkett, subcontractor; Atascosa County Commissioner Lonnie Gillespie (Pct. 1) and Atascosa County Auditor Ray Samson.