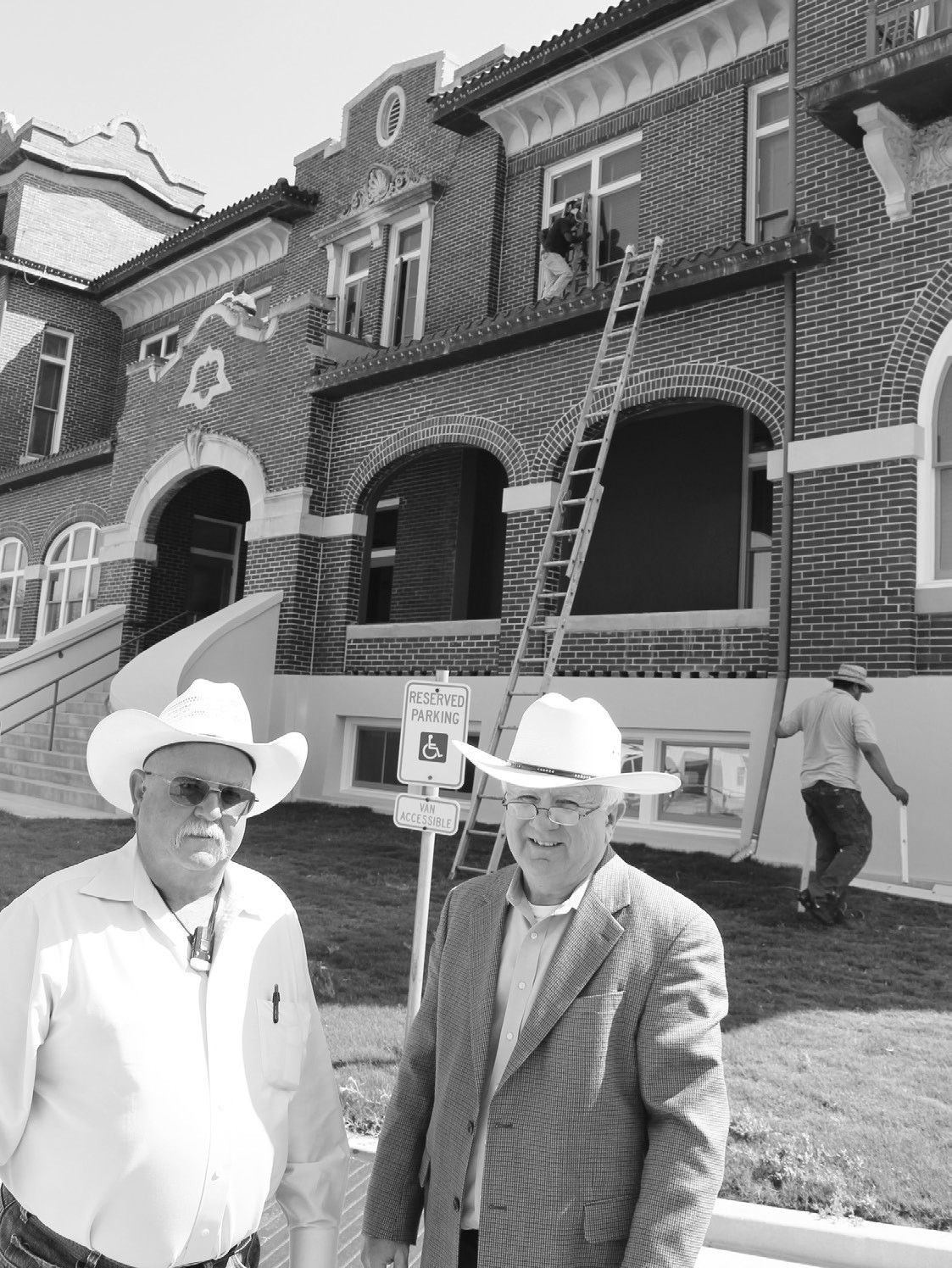 During the last few months the Atascosa County Courthouse, in Jourdanton, has been undergoing some much needed maintenance to keep the building in good working condition.

Atascosa County Auditor Ray Samson said, “The first problem solved was water entering two rooms in the County Attorney’s basement office during heavy rain. The County found that roots from the palm trees had gotten in between the basement wall and a protective covering that had been installed ten years ago and had let water in.

“The solution was to install a new protective covering and to remove the palm trees. Cracks in the interior walls in the two offices were sealed and the offices painted and new carpet put in. Underground pipe to get the water away from the building to the circular drive was also put in.

“The second major problem was missing grout around the windows in the courthouse because of weathering,” said Samson, “Some of the wooden window sills also had dry rot. Painters have caulked and repainted the window frames and replaced the window sills where necessary,” he continued.

“Other problems involved cracks in the bottom exterior cement skirt of the building and the four entrances to the courthouse including the banisters on each side of the steps where you enter the building. These were all repaired and repainted. Cracks and crumbling concrete in a two foot high concrete wall around the basement entrance were also found and repaired as well as a cracked wall outside the County Auditor’s office on the courthouse porch,” he added.

County Commissioner Lonnie Gillespie along with Ray Samson, have, both, spent much extra time directing these projects and deserve to be commended for doing so.

“Various cracks in the interior Courthouse office walls were also repaired and repainted. The concrete floor in the basement was repainted because of substantial wear. Paint colors matched what was done in the previous remodeling ten years ago.

“The porch ceiling around the Courthouse has also been painted,” added Samson.

In this Courthouse maintenance project, for the exterior basement walls and putting in the downspout drains to get water away from the building, the County paid Wells Construction $63,000. That part of the project necessitated deep trench digging around the immediate exterior of the Courthouse where water barriers were added and roots were removed. That phase of the project was finished in January, 2013.

For the concrete repairs on the skirt to the building and various walls and steps for the courthouse, the County used a local company, E C Lath & Plastering owned by Eddie Carrasco. Total cost was $15,400.

The County has a project, that’s just starting, to repair various ceramic tiles and other roof problems. Projected cost is $5,000.

Samson said, “All of these expenditures are within our budget for repairs.”

In the remainder of the year, the County hopes to put in new carpet in the Courthouse and paint interior walls that are in need of painting. In all cases, the Courthouse will look just like it does now except that the carpeting will be in the form of carpet squares so if one spot can’t be cleaned, they can simply put in a new carpet square to fix it.

County offices in Jourdanton, including the Courthouse, will soon have fiber optic lines installed that will replace the T1 lines and wireless internet the County now uses.

Ray Samson said, “The cost of the service will be substantially less than what the County now pays and the speed will be extremely faster.” 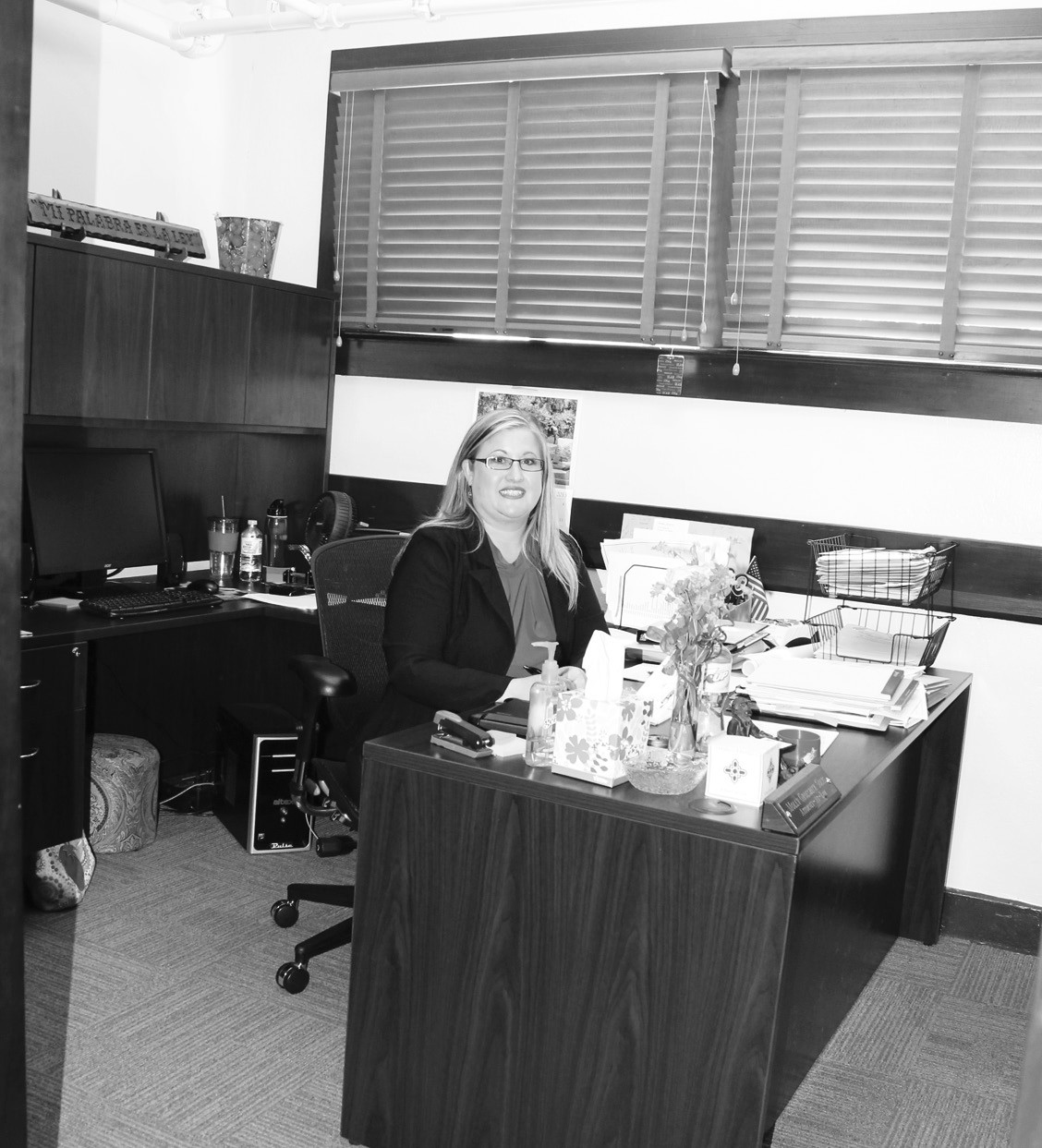