Amendments to Home Rule Charter to be decided by voters Saturday, May 9 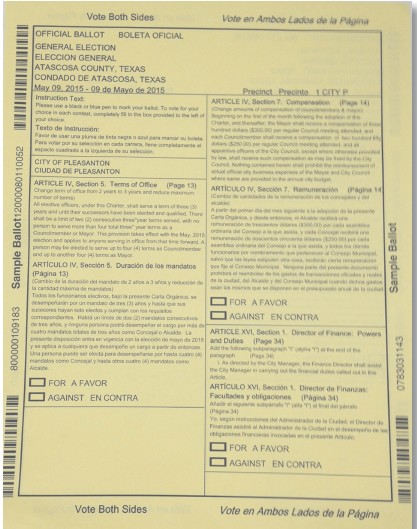 The numbers have been sluggish in early voting for Pleasanton’s amendments to the Home Rule Charter. It could be because there are no councilmembers nor mayor running for office.

But, there are four amendments the ballot which need to be decided. One is about term limits, another is compensation changes for the mayor and councilmembers. The third adds a subparagraph to the powers and duties of the Director of Finance and the fourth one increases the limit for Contract for City Improvements’ dollar amount from $5,000 to $25,000. All changes are in bold print.

All elective officers, under this Charter, shall serve a term of three (3) years and until their successors have been elected and qualified. There shall be a limit of two (2) consecutive three-year terms served, with no person to serve more than four total three-year terms as a Councilmember or Mayor. This provision takes effect with the May, 2015 election and applies to anyone serving in office from that time forward. A person may be elected to serve up to four (4) terms as Councilmember and up to another four (4) terms as Mayor.

increase the amounts of compensation of councilmembers (from $20 to $250) and mayor (from $30 to $300) per regular Council meeting attended.

Beginning on the first of the month following the adoption of the Charter, and thereafter, the Mayor shall receive a compensation of three hundred dollars ($300.00) per regular Council meeting attended, and each Councilmember shall receive a compensation of two hundred fifty dollars ($250.00) per regular Council meeting attended, and all appointive officers of the City Council, except where otherwise provided by law, shall receive such compensation as may be fixed by the City Council. Nothing contained herein shall prohibit the reimbursement of actual official city business expenses of the Mayor and City Council where same are provided in the annual city budget.

i. Audit and approve before payment all bills, invoices, payrolls, and other evidences of claims, demands, and charges against the city government and with the advice of the city attorney determine the regularity, legality, and correctness of such claims, demands, or charges as directed by the City Manager, the Finance Director shall assist the City Manager in carrying out the financial duties called out in this Article.

This amendment would increase the limit for Contract for City Improvements’ dollar amount from $5,000 to $25,000.

Any city improvement costing more than twentyfive thousand dollars ($25,000.00) shall be executed by contract except where such improvement is authorized by the City Council to be executed directly by a city department in conformity with detailed plans, specifications, and estimates. All such contracts for more than twenty-five thousand dollars ($25,000.00) shall be awarded to the lowest responsible bidder bidding in conformity with detailed plans and specifications approved by the City Council after such public notice and competition as may be prescribed, provided the City Council shall have the power to reject any or all bids. Except in case of emergency, alterations in any contract not to exceed twenty-five (25) percent of the total contract may be made when authorized by the Council. The contract may be decreased more than twenty-five (25) percent with the consent of the contractor.

Election day is Saturday, May 9 and the polls will be open from 7 a.m. until 7 p.m. at the Pleasanton Elementary School Library, 628 N. Main.