A day to remember 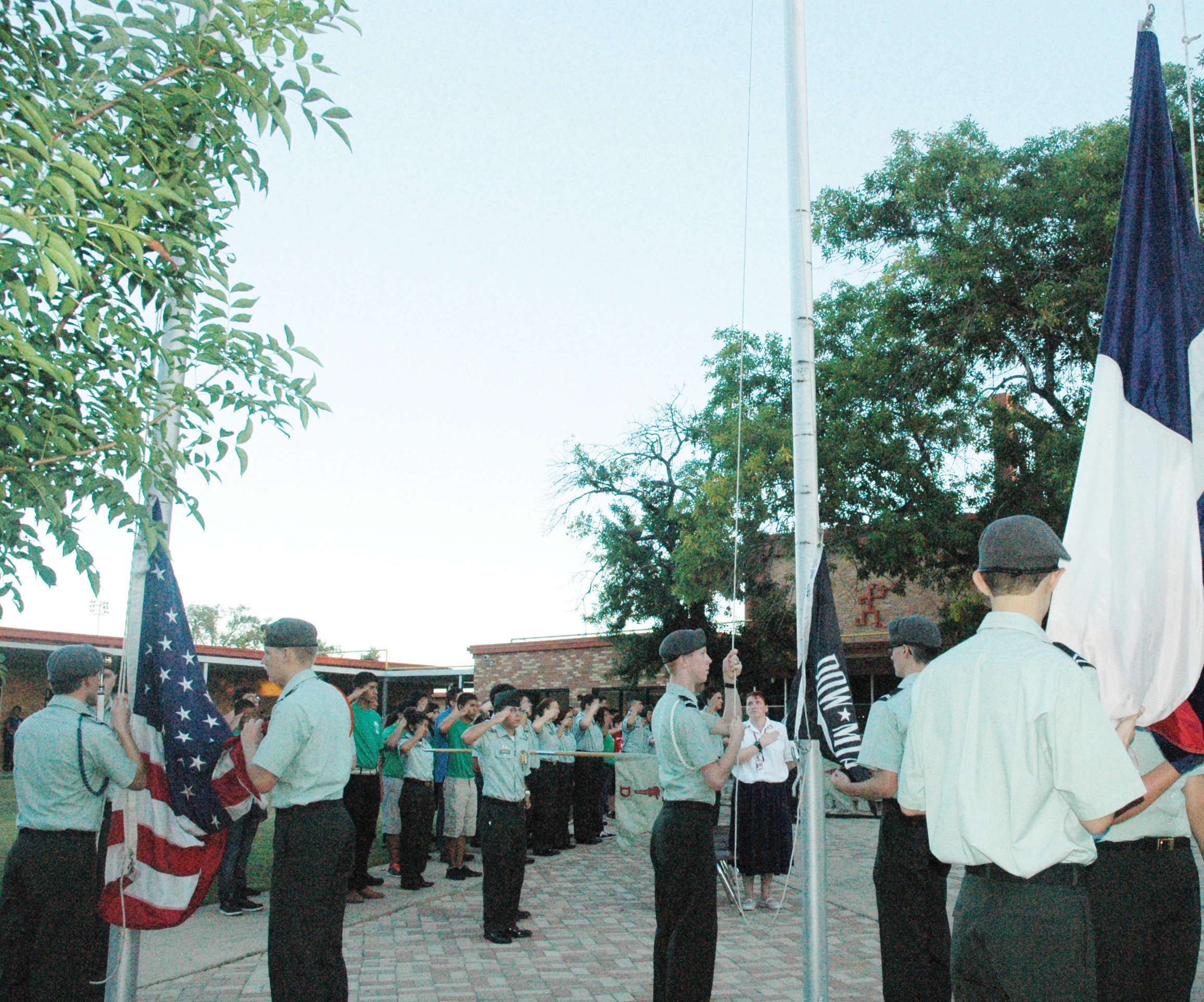 JROTC Cadets prepare the United States, POW/MIA and Texas flags to be flown at half-staff during the Patriot Day ceremony on September 11 at the Pleasanton High School.

“We are here to remember and pay respect to the victims of the 9-11 attacks and to those who have sacrificed and continue to sacrifice so much for our freedom and American way of life,” said Paez.

The ceremony was dedicated to the Armed Forces and all First Responders on the 13th anniversary of the attack on the United States. Those in attendance who were or have served in that capacity were recognized and honored.

“Today is not an anniversary we will ever celebrate, but is one that we should never forget,” said Paez.

Several speakers took the podium and offered their support for first responders, memories of 9-11 and why it is important for young people to be called to serve their country.

The first speaker was Cadet First Lieutenant Michael Canales. He is the Eagle Battalion Supply and Logistics Officer as well as a junior volunteer fire fighter for the Poteet Volunteer Fire Department. He is the Poteet Explorer’s Fire Chief and serves his community as a junior first responder. “When you are in a building with zero visibility, your only concern is where is your partner,” he said, citing what firemen and first responders go through each time they go to a call and how the brave actions were of those who responded on 9-11.

He was there that fateful day witnessing the attack on America. He offered these words to the JROTC Cadets. “Dedication and determination are two words that I live by,” said Dennis. “If you stay with this, you will become men and women in ways you would never expect,” he continued.

Before the Honor Guard approached the flagpoles to raise and lower all the flags – the U.S., the Texas and the POW/MIA – to half-staff to honor the deceased, an explanation of the custom was given:

“The custom is so old that, in fact, no one really knows how it got started. One school of thought holds that the tradition of lowering the flag, to allow flying the invisible ‘flag of death’ above, began long ago in Europe. Others maintain that this is a centuries old naval tradition that is used as a sign of mourning, respect, and remembrance. In the United States, according to federal regulations, the actual term of usage is ‘half-staff,’ to indicate the flag pole or flagstaff, but most people persist in use of the term ‘half-mast.’

“In the United States, regulations call for the flag to be placed at a position approximately halfway on the staff when the order to place flags at half-staff is issued. They are first raised to the top of the staff, then lowered ceremoniously to the proper position and secured. Public Law dictates our Nation’s flag to be flown at half-staff on September 11th.”

The ceremony continued with an explanation of the bugle call “Taps”

“Taps began as a revision to the signal for Extinguish Lights (Lights Out) at the end of the day when soldiers are to turn out the lights and go to bed. Up until the Civil War, the infantry call for “Extinguish Lights” was the one which had been borrowed from the French. A popular story for the origin of ‘Taps’ credits the Civil War Union General Daniel Butterfield for its music in July, 1862.

“As the story goes, General Butterfield was not pleased with the call for “Extinguish Lights” feeling that the call was too formal to signal the days end and with the help of the brigade bugler, Oliver Wilcox Norton, wrote Taps to honor his men while in camp at Harrison’s Landing, Virginia, following the Seven Day’s battle. These battles took place during the Peninsular Campaign of 1862. The call, sounded that night in July, 1862, soon spread to other units of the Union Army and was even used by the Confederates. ‘Taps’ was made an official bugle call after the war and in 1874, it was officially recognized by the United States Army.”

Cadet Estrella Casias of Bravo Company sang the National Anthem – which celebrated its 200th birthday as the poem written by Francis Scott Key during the War of 1812 this past Sunday, September 14.

The haunting sound of “Taps” followed the Star Spangled Banner. The crowd dispersed after the JROTC thanked everyone for coming to the ceremony.

Pleasanton H-E-B Partners honored the city’s fire fighters and police department with a luncheon held on Sept. 11 at the Pleasanton Fire Hall.

The volunteer service project Helping Heroes had over 40 area stores visit 135 fire stations to show their support and appreciation for local firefighters and first responders. Statewide, more than 4,130 H-E-B Partners from 297 stores along with manufacturing and support centers participated and visited 636 fire stations across Texas.

Everyone was treated to a luncheon of chicken Alfredo, salad, bread and cake. Each group was given an ice chest full of snacks and beverage items as well.

This community project honors September 11 as a National Day of Service and Remembrance that pays tribute to the men and women of the rescue teams who risked and lost their lives at the World Trade Center.

“We are very blessed to have an outstanding group of first responders here in Atascosa County. It is a privilege every year for us to honor them in our Helping Heroes 9/11 event,” said Pleasanton HE B Unit Director Aubrey Smith. 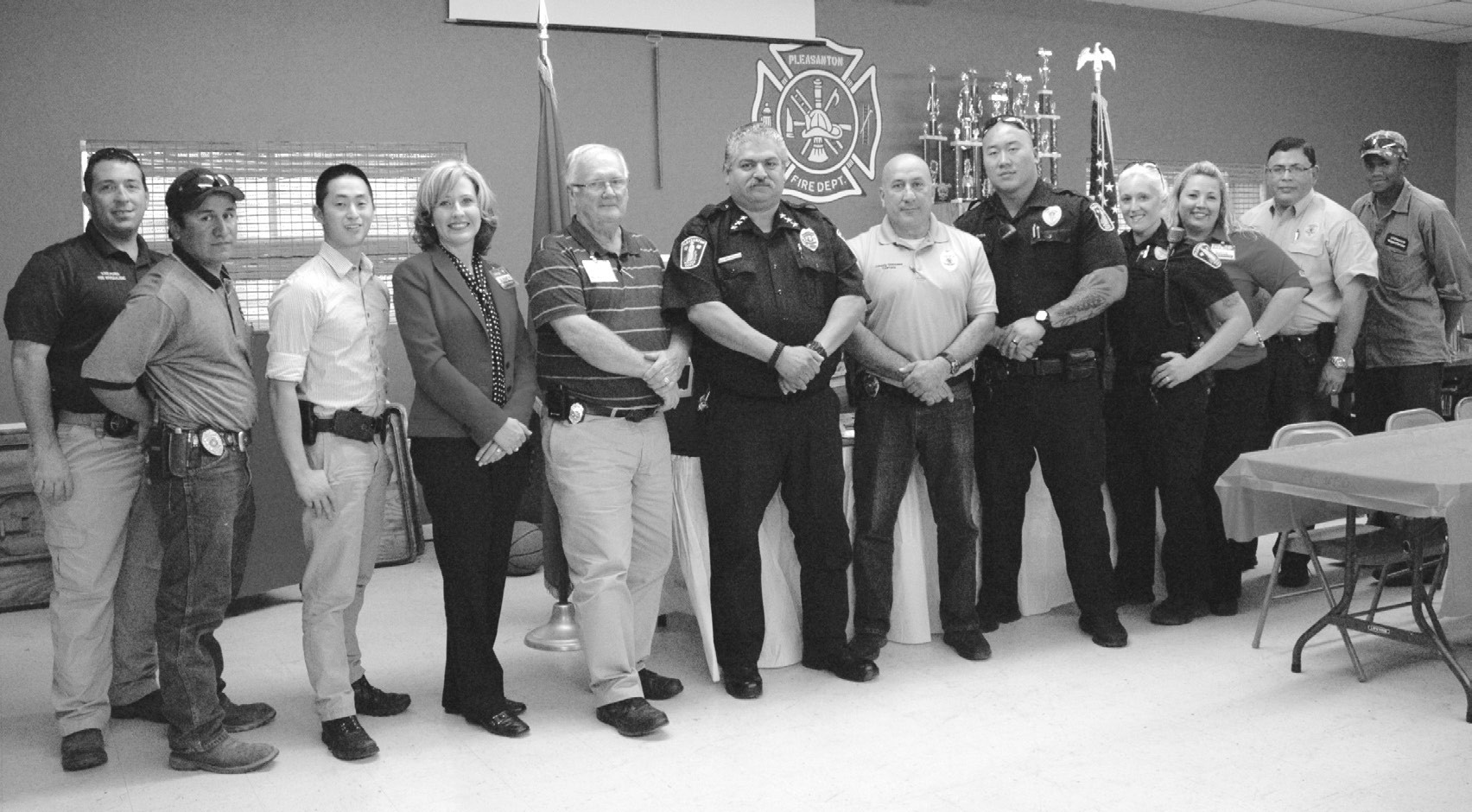