A Crown For Orie 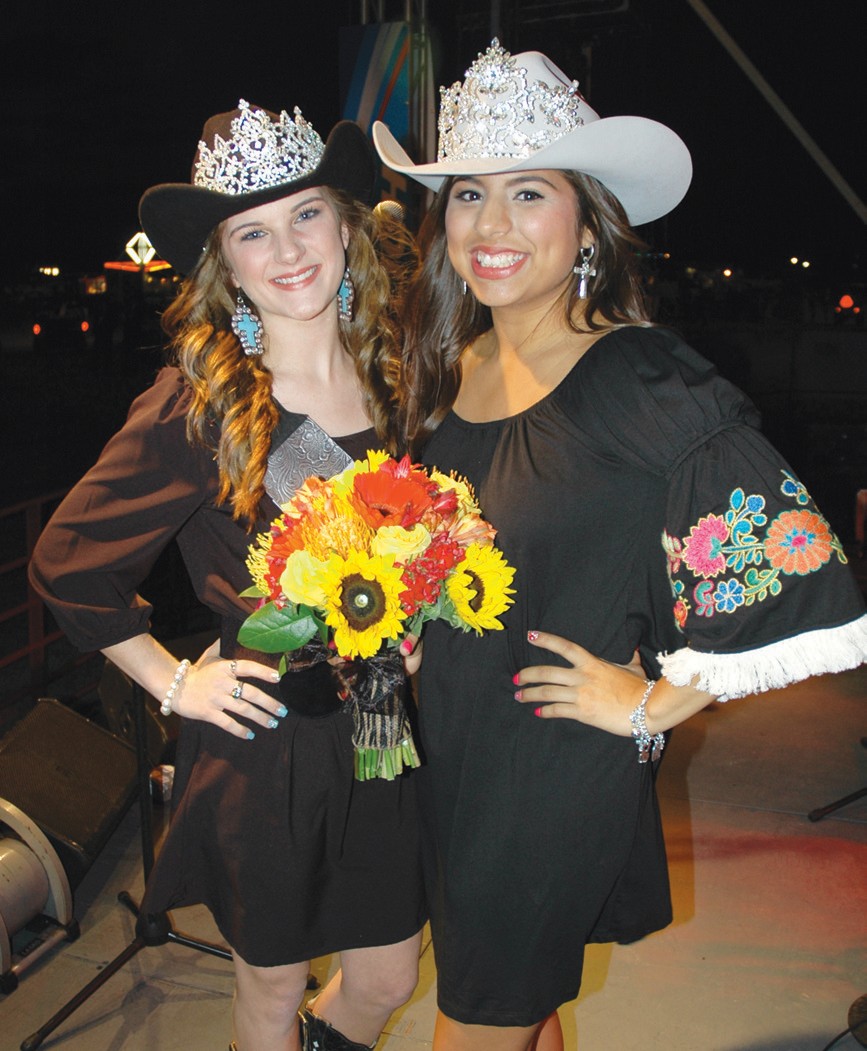 Oriana Ortiz (right) was crowned the 48th Cowboy Homecoming Queen at the coronation on Friday by 2012-13 Queen Kianne Rowinsky.

While the final numbers aren’t in just yet, Cowboy Homecoming planners and most who attended are agreeing the change of venue was for the better.

Pleasanton Chamber of Commerce President Chico Cox was very pleased. “All in all it was a great turnout. A few minor tweaks for next year will be addressed,” he said. “People came up to me to say that having the bull ride and everything so close plus the breeze was a big improvement.”

Early Friday morning, the South Texas Regional Medical Center crew headed by Will Brown cooked the Cowboy Breakfast for those who were craving breakfast tacos, coffee and juice.

Later that evening the 2013-14 Cowboy of the Year, Roy Alonzo, who was honored at the Pleasanton Young Farmer’s Rodeo in August, was given a belt buckle by the Pleasanton Chamber of Commerce just before the queen’s coronation on Friday night.

Team roping was going on during the whole evening as well.

After the coronation, The Palacios Brothers entertained before the 80s hair band LC Rocks took the stage.

The Cowboy Gallop and Fun Walk was warmer than last year’s cold temperature. The overall male winner was Christopher Hernandez. He finished with a time of 17:19. And for the fifth time, fourth in a row, Bianca Paredes was the overall female winner. Her race time was 21:52. Complete results and photos are in the sports section.

The parade and those viewing were well attended. A lot of original and beautiful entries participated. Winners are:

Out of Town Floats

The Texas Hold ‘em Tournament grand prize winner was Ted DeVilbiss. He won a trip for two to Las Vegas.

Winning the Grand Prize for the Barbeque Cook-off was Monte Brown and the Trash Can Cookers. For complete results and photos, please see page 12C.

There were great arts and crafts, a fun carnival and lots of good food that was enjoyed.

The Rotary’s Cow Patty Bingo winner, Katy Gonzales, was camped out at her BBQ area and was surprised that she won the $1,000. Her “bingo” square was the lucky one.

The Saturday night’s entertainment of Casey Donahew and Easton Corbin drew one of the biggest crowds. It was estimated between 3,000 and 3,500 were in attendance.

“Next year, we have some ideas to improve. We’ll be in good shape. We want to make it better each year,” said Cox.