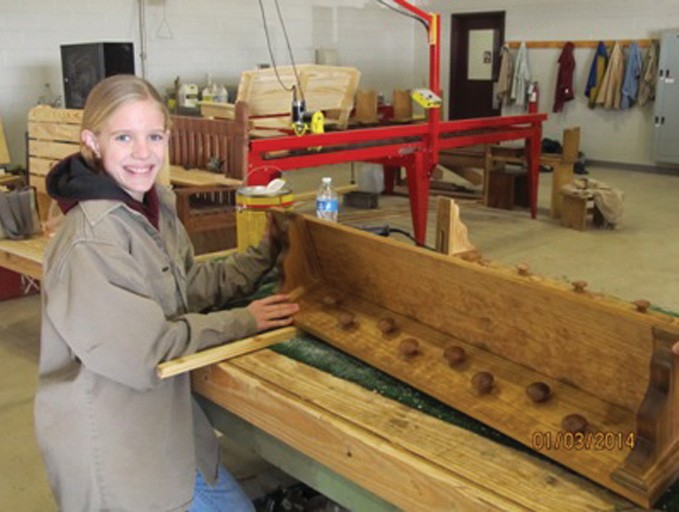 Kayli Kennedy puts the finishing touches on her trophy shelf. It is her 2014 ACLS Junior Ag Mechanics project.

Students across the county have been working diligently the past few months to prepare their livestock show projects for the Atascosa County Livestock Show which begins next Tuesday, Jan. 14.

For 60 years, students have learned responsibility and accountability through these projects. There have also been a large number of volunteers who also have worked tirelessly to assist these youth.

The 2014 show is dedicated to the memory of several men who had been very involved in the success of the show over the years. They are Roy Wheeler, Tommy Shearrer and Jason Krueger.

Judging will begin next Tuesday, Jan. 14 and run through Friday, January 17.

The Parade of Champions, is scheduled for Saturday, January 18 for those exhibits making the final cut. And of course, the big auction will begin at 1 pm. Tuesday Judging

On Wednesday, the Poultry and Showmanship judging begins at 10:30 a.m. with Dennis Ellebracht making the call for winners. Judging of the Market Lambs will begin after classifying (2 pm.) Marty Gibbs will serve as judge.

At 3 p.m., Judge Jerome Tymrak will begin to examine the craftsmanship of the Ag Mechanics exhibits. Thursday Judging

Thursday morning kicks off at 8 a.m. and Judge Bran- don Anderson has the duty of ranking swine on Thursday morning. Market will be followed by the Breeding Swine competition.

Those with Beef projects will be busy throughout the day with preliminary checkins, sifting and classifications. Rogelio Mercado will act as Steer Classifier. Friday Judging

At 8 a.m. Friday, January 17, Doug Pierce will begin judging the Beef Cattle competitors (market then breeding). Ag Mechanics projects must be removed from the Showbarn by noon. At 2 p.m., or immediately following the Beef Show, there will be a Judging Contest.

At 3 p.m. Friday, all exhibitors participating in the auction on Saturday will help set up for the auction. Parade of Champions & Auction

Just about everyone’s favorite events – the Parade of Champions gets underway Saturday, January 18 at 11 a.m. There are two judges for Showmanship – Jonathan Murin (Tuesday & Wednesday) and Marco Barrientos (Thursday & Friday).

At the same time, the hospitality area for auction buyers will be open. Joey Tomlinson, the popular auctioneer, will lead the sale starting at 1 p.m.