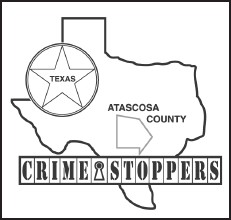 The Atascosa County Sheriff’s Department along with Crime Stoppers is hoping that a FIVE THOUSAND-DOLLAR cash reward being offered for one week only will help solve a report of a burglary located in the 700 block of Rodriguez Street in the City of Charlotte.

On Thursday, May 9, 2013 sheriff’s deputies were dispatched to RC’s Bar in the 700 block of Rodriguez Street for a burglary. Upon the deputies arrival they were informed by the owner that he locked up the bar at about 11:45 p.m. on Wednesday, May 8, 2013 and was notified at about 6:00 a.m. Thursday, May 9, 2013, that the bar had been broken into. Evidence at the scene made it appear that the front doors had been pried open. Once the owner entered the building he found it had been burglarized. Property taken in the burglary included an Infocus TV projector, a Sanyo TV, and 5 cases of beer along with an undisclosed amount of money from the juke box and pool table. Estimated value of the property stolen is over $1,500.00.