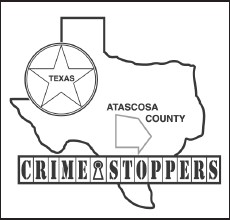 The Atascosa County Sheriff’s Department along with Crime Stoppers is hoping that a FIVE THOUSANDDOLLAR cash reward being offered for one week only will help solve a report of a burglary located in the 1000 block of Big Leaf Road, located near the Atascosa/Bexar County line.

On Saturday, March 9, 2013 sheriff’s deputies were dispatched to a residence in the 1000 block of Big Leaf Road for a report of a burglary. Upon the deputies arrival they were informed by the property owners that sometime between September 15, 2012 and March 9, 2013 the shed was broken into. Property taken in the burglary included a Porter Cable generator, a Ryobi table saw, a Delta miter saw and a Craftsman Pro Router. The estimated value of the property stolen is over $1,000.00.