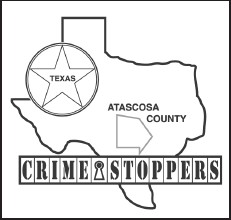 The Atascosa County Sheriff’s Department along with Crime Stoppers is hoping that a FIVE THOUSAND-DOLLAR cash reward being offered for one week only will help solve a report of a burglary located in the 200 block of Doodlebug Lane, located 4 miles east of Leming.

On Friday, March 1, 2013 sheriff’s deputies were dispatched to a residence in the 200 block of Doodlebug Lane for a report of a burglary. Upon the deputies arrival they were informed by the property owners that sometime between February 26, 2013 and March 1, 2013 the residence was broken into. Property taken in the burglary included an HK AR-15 rifle, a Remington 12 gauge shotgun, a S&W .38 special revolver, a S&W .45 automatic 3” subcompact handgun, a Cobra .45 automatic 3” subcompact handgun, a Springfield Armory 1911 .45 automatic handgun, a Ruger .380 automatic handgun, a vast amount of collectors coins including silver ingots, gold ingots, mint sets, Carson City dollars, Eisenhower dollars, Ike dollars, Walking Liberty half dollars, Sacagawea dollars, gold dollars, a coin collection with foreign coins, an antique silver service for 8, a silver salad fork set, a Playstation 3 game system, Skullcandy headphones and a DVD player. The estimated value of the property stolen is over $19,000.00.