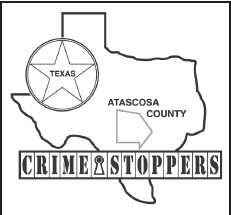 The Atascosa County Sheriff’s Department along with Crime Stoppers is hoping that a FIVE THOUSAND-DOLLAR cash reward being offered for one week only will help solve a report of a burglary located in the 1700 block of Tumlinson Road, located east of US 281, north of Verdi Road.

On Friday, January 11, 2013 sheriff’s deputies were dispatched to a residence in the 1700 block of Tumlinson Road for a report of a theft. Upon their arrival they were informed by the homeowners that their family left that morning at 7:15 a.m. and when they returned at 4:00 p.m. they found that they residence was broken into. Property taken in the burglary included a Kindle Fire tablet, a Samsung 42” flatscreen TV, a Sony laptop, and an Xbox Kinect Sensor. The estimated value of the property stolen is over $2500.00.