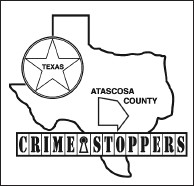 The Atascosa County Sheriff’s Department along with Crime Stoppers is hoping that a FIVE THOUSANDDOLLAR cash reward being offered for one week only will help solve a burglary located in the 60 block of Country View Drive, 1.5 miles off of Dugosh Road.

On October 3, 2014 at about 2:00 p.m. sheriff’s deputies were dispatched to a residence in the 60 block of Country View Drive for a report of a burglary. Upon the deputies arrival they were informed by the homeowner that the family left the residence that morning at about 9:00 a.m. and returned home later that day at about 2:00 p.m. When they returned home the front door was open and a computer component was left on the front porch. The residence was in a state of disarray and numerous items were missing. Stolen property included a Mitsubushi 40” flat screen TV, 2 – Apple iPads, an Apple iPod Touch, an Apple Macbook, a Canon Digital Camera, an Apple iPhone 5C, a small safe, a Dell laptop, an Acer laptop, an Emerson 24” TV, numerous tools, purses, wallets, belts along with numerous pieces of James Avery jewelry. The estimated value of the property stolen was over $20,000.00.