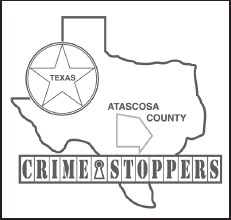 The Atascosa County Sheriff’s Department along with Crime Stoppers is hoping that a FIVE THOUSAND-DOLLAR cash reward being offered for one week only will help solve a report of a burglary located in the 200 block of Cruz Lane, 3 miles west of TX HWY 16 on Price Road, ½ mile north of West Ditto Road.

On Monday, October 8, 2012 sheriff’s deputies were dispatched to the 200 block of Cruz Lane for a report of a burglary. Upon their arrival they were informed by the property owner that their residence had been burglarized. The property owner stated they were gone for a short amount of time that day and when they returned they found that the back door to the residence was damaged. Property stolen from the residence included a Remington .22 caliber rifle, a Dell desktop computer, a 46” flatscreen tv, a blue-ray DVD player and numerous DVD’s. The estimated value of the property stolen is over $2,000.00.