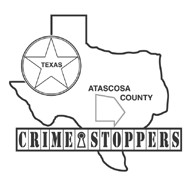 The Atascosa County Sheriff’s Department along with Crime Stoppers is hoping that a FIVE THOUSAND DOLLAR cash reward being offered for one week only will help solve a burglary that occurred in the 1800 block of Sandbranch Road, north of FM 2504 in the Kyote area.

On Tuesday, July 10, 2012 sheriff’s deputies were dispatched to a residence in the 1800 block of Sandbranch Road for a burglary. The homeowner reported that they left their home at 6:00 a.m. that morning and when they returned at 6:00 p.m. that evening they found the front door was pried open. Stolen property included 2 – Phoenix .22 caliber semiautomatic handguns, a Springfield Armory .45 caliber handgun, a Ruger .243 pistol, a Ruger .357 pistol, a Mouser 8mm pistol, a Savage .308 caliber pistol, a Hi Point 9mm handgun, 2 – Savage .22 caliber rifles, a Beretta .22 caliber pistol, a Ruger MK III .22 caliber pistol, a Stihl electric chainsaw, 2 – Ryobi miter saws, a Ryobi orbital sander, a Ryobi scroll saw, a Ryobi router, a Ryobi grinder, a Ryobi skill saw, a bicycle, a gas chainsaw and a compressor. The estimated value of the property stolen was over $4,000.00