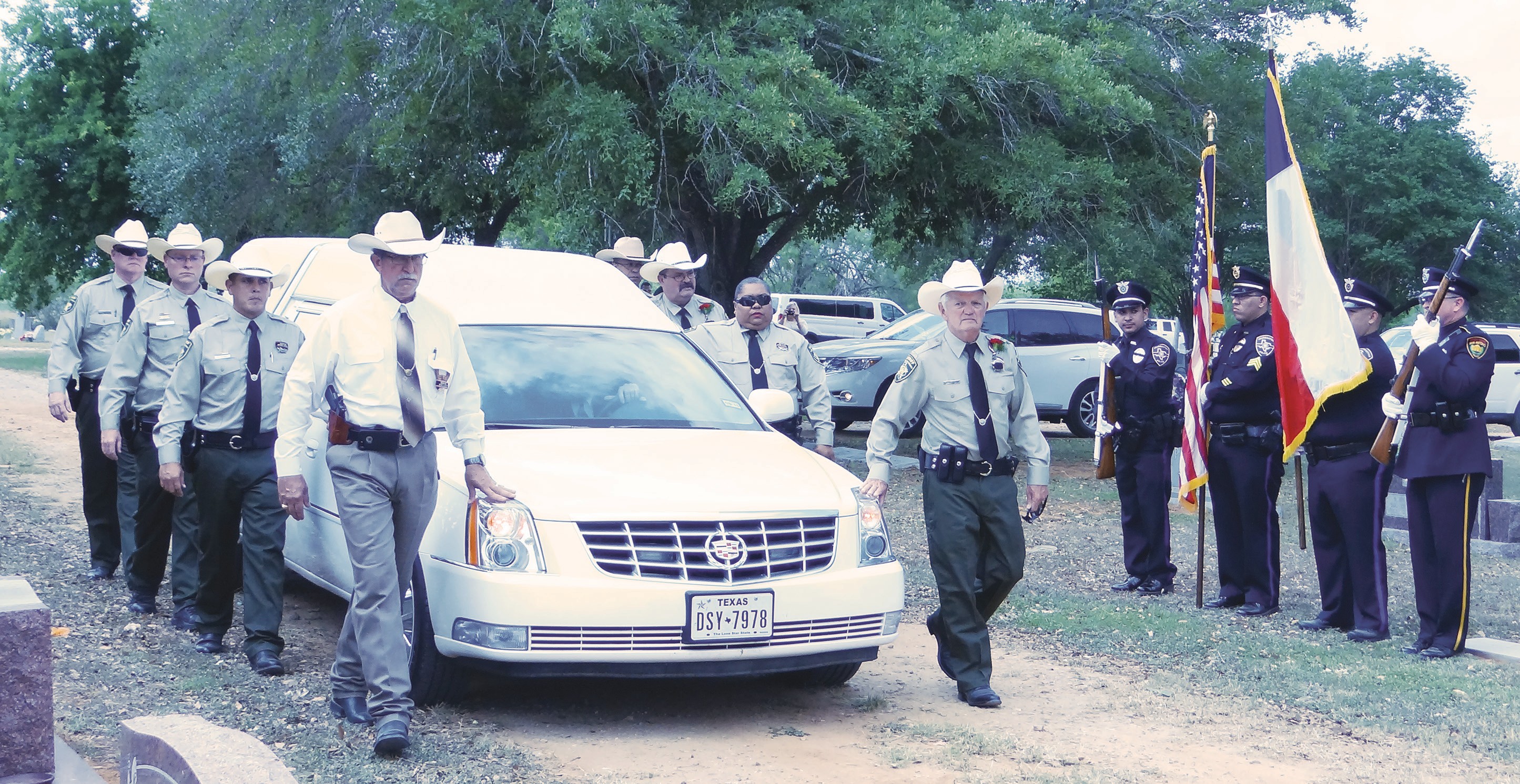 “He squeezed a lot of living into 57 years,” Ross Rutherford said of his brother John Eric.

John Eric Rutherford was born February 20, 1959 in Jourdanton to Bill Dale and Lucille (Anderson) Rutherford. Growing up in the country, John Eric developed a love for animals, big and small, but specifically with horses. He was a cowboy at heart. “Had he been born 100 years earlier he would have been content, he would have had his horses,” his wife Cathleen said. He never saw a need for a 4-wheeler, if he could use a horse, he would.

As a child his family owned a dairy farm and on February 8, 1968 he and his brother became the “Rutherford Dairy Crew.” It was no small task, rising for the first milking at 5 a.m., the boys had little time for extra activities. John Eric worked that much harder so his brother could play little league. Fortunately, working on the farm didn’t prevent all of his extracurricular activities. He graduated in 1977 from Jourdanton High School where he was a band member and an FFA Lonestar Farmer.

He married Cathleen Lancaster February 4, 1984. The two started their family having their oldest child Charles later that year, followed by Cassandra in 1987 and John Andrew in 1988. John Eric loved his family, and faithfully visited his mother and mother-in-law every day. If he was unable to go for a visit, Lucille would without a doubt receive a phone call.

His love for people was not limited to family and he wasn’t biased, he would talk to anyone, from the guy digging a ditch to the executive in a $3,000 suit. He just enjoyed people.

This, too, was probably something he learned as a child, being the grandson of a minister. As a youngster he literally saw his father give someone who needed a dress shirt for a funeral the shirt off his back.

There are countless stories of John Eric himself giving without reserve. “He was great. God used him well,” said his son Charlie.

He once let a disabled veteran he had never met take his pickup truck and horse trailer. “I’ll just leave the keys in the visor for you. Come get it when you need it and drop it off when you’re done,” he told the man on the phone.

If John Eric did something, there was no half way. He was certainly an active member of the community. Over the years he volunteered in countless area events and associations, from the Boy Scouts, the Atascosa County Historical Society to participating in ranch rodeos. He joined the Masons in 1980 and was an endowed member of Zanderson Lodge 1120, AFAM in Jourdanton, a past Master Mason and District Deputy Grand Master. He was a Life Member of the Atascosa County Law Enforcement Officers Association and a member of the Pleasanton School Board to name a few.

If that sounds like more than enough to keep a man busy, it wasn’t enough for John Eric Rutherford. From 1992 to 2009, he was an instructor for Alamo Area Council of Governments

AACOG). He often included his kids on this stint, where they were lured into playing various parts such as witnesses or victims for the cadets to investigate. He also helped with the Mounted Parking at Cowboy Fellowship, was a member of the Brush Country Trail Riders Association, served as Mounted Security at different venues around South Texas and was the head of security at the Poteet Strawberry Festival for 16 years.

John Eric began his career in Law Enforcement in 1982 starting at the Jourdanton Police Department, which the time, only had two fulltime officers.

He left there in 1985 to begin a career in Pleasanton. He worked his way up the ranks as a patrolman, Sergeant, Lieutenant, Investigator, Assistant Chief and Interim Chief. He retired from the Pleasanton Police Department on November 26, 2012 and started working for the McMullen County Sheriff’s Department the very next day, November 27, 2012, where he soon became Chief Deputy Sheriff.

After John Eric graduated high school he attended Texas Tech “until he went broke,” he would say. But that didn’t stop his determination to continue with an education. He would eventually go on to earn an associate’s degree in Criminal Psychology and in 1997 he graduated from Wayland Baptist University in San Antonio with a Bachelor’s Degree in Criminal Justice.

He believed in training and received more than what a peace officer is required. He was a certified negotiator and even went through FBI SWAT training. It is no wonder he was honored as Lawman of the Year in the 1990s.

John Eric and Cathleen’s son John Andrew (Andy) followed in his father’s footsteps to become a lawman. He said he didn’t have plans for that career growing up. After the Atascosa County Ambush, which happened when Andy was a boy, he wasn’t too keen on the idea. But, after graduating high school in 2007 he decided a 4-year college wasn’t the life for him. After talking with his parents, he was encouraged to join the academy. Ironically it was his sister, Cassie, who had intentions of working in the criminal justice field going to Huntsville to study at Sam Houston State University for criminal justice. But it wasn’t a life her family wanted for her. With her father’s encouragement she decided she could help more people by becoming a nurse. A decision that she hasn’t regretted.

Andy started his career in law enforcement in 2009 at the same place his dad did, the Jourdanton Police Department. He now works for the Atascosa County Sheriff’s Department where he has been since October of last year.

John Eric was diagnosed with Type 1 diabetes at the age of 10. This is a disease that takes a toll. He was meticulous about keeping his doctor’s appointments and his blood sugar regulated, but in June of last year, his kidneys began to fail. Not a heavy drinker, he stopped all-together with that diagnosis and was put on a donor list.

Full of pep, John Eric continued working and making his rounds, even attending a social function in Tilden the weekend of May 7. Unfortunately, two days later, May 9, John Eric wasn’t feeling well and made an appointment with the doctor who immediately admitted him to the hospital. Doctors decided he needed a quadruple by-pass and John Eric passed away shortly after the procedure on May 10.

Today, people in Atascosa and McMullen Counties are mourning the great loss of McMullen Chief Deputy, badge number 211. Countless Facebook posts with hundreds of shares prove he touched many lives with his calm demeanor, encouraging words and quick-witted humor. A modest man, he would have been shocked to see the impact he had on the community. Hundreds showed their respects at his funeral service with law enforcement officers from all over the state represented. As the funeral procession passed people not only stopped their vehicles, but got out to show respect as John Eric made his last pass through town.

“McMullen County 211 Chief Deputy John Eric Rutherford made last call May 10, 2016 after over 33 years of dedicated service to the citizens of his community, the law enforcement profession, and to the State of Texas. May you rest in peace knowing your strength lives on in your family, your legacy is carried on in your children and your loyalty and honor continues with us all. Chief Deputy John Eric Rutherford Thank you for your service. 211 you are clear to go.” 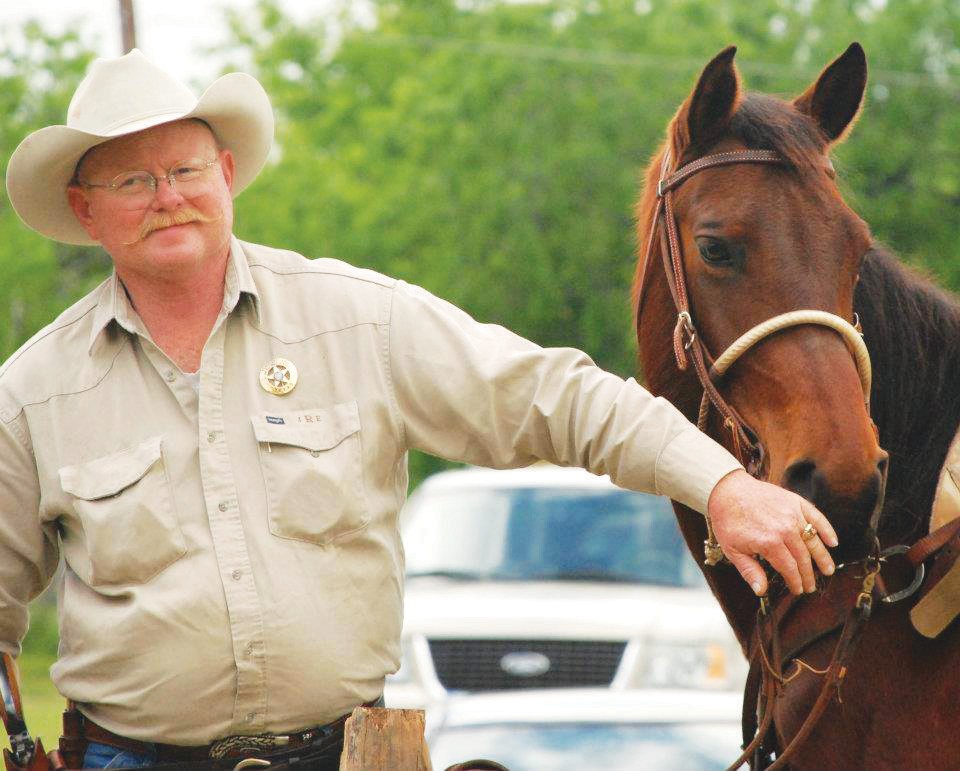 John Eric Rutherford and his horse Dolly at a historical re-enactment in 2012 where he played the part of the local sheriff. 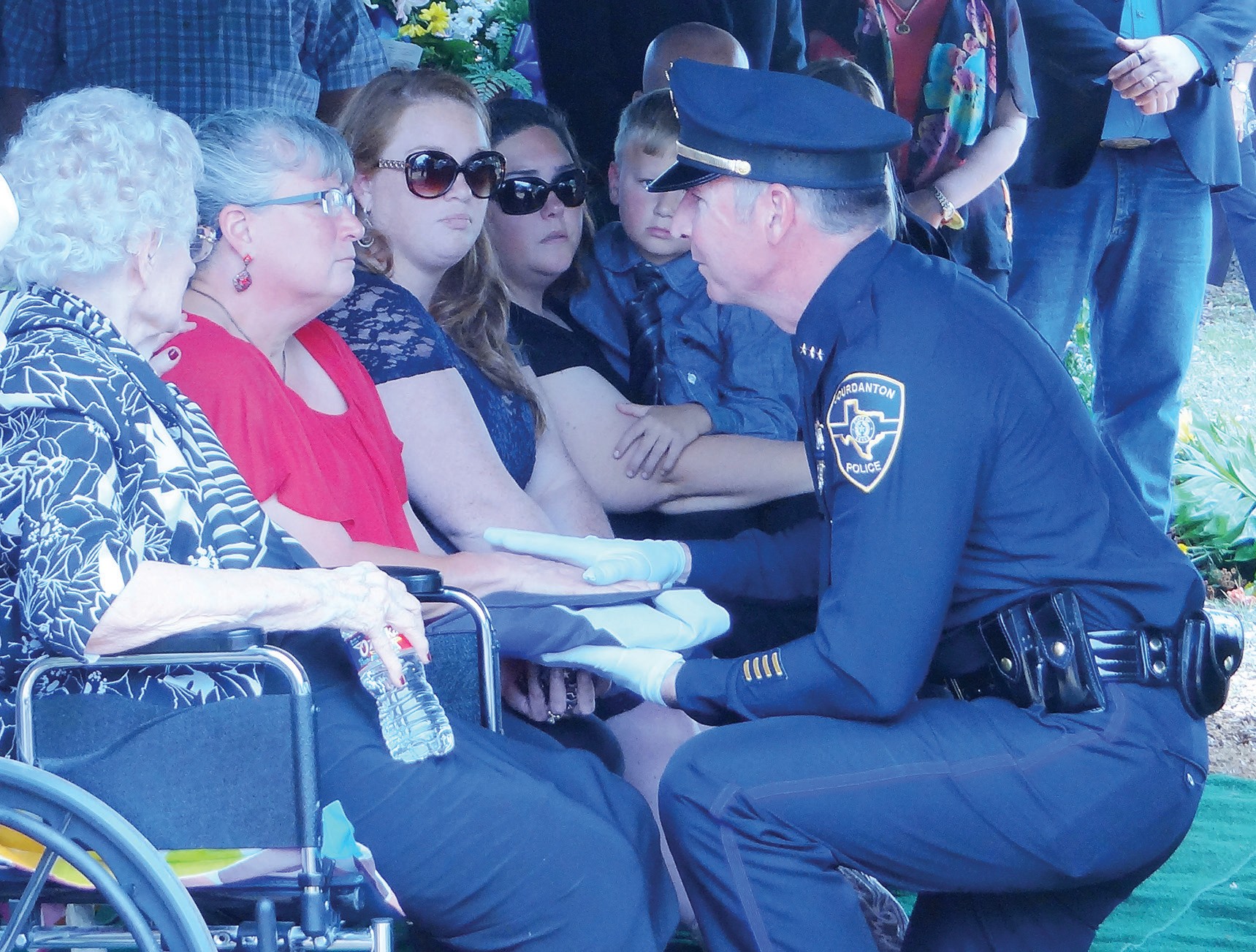 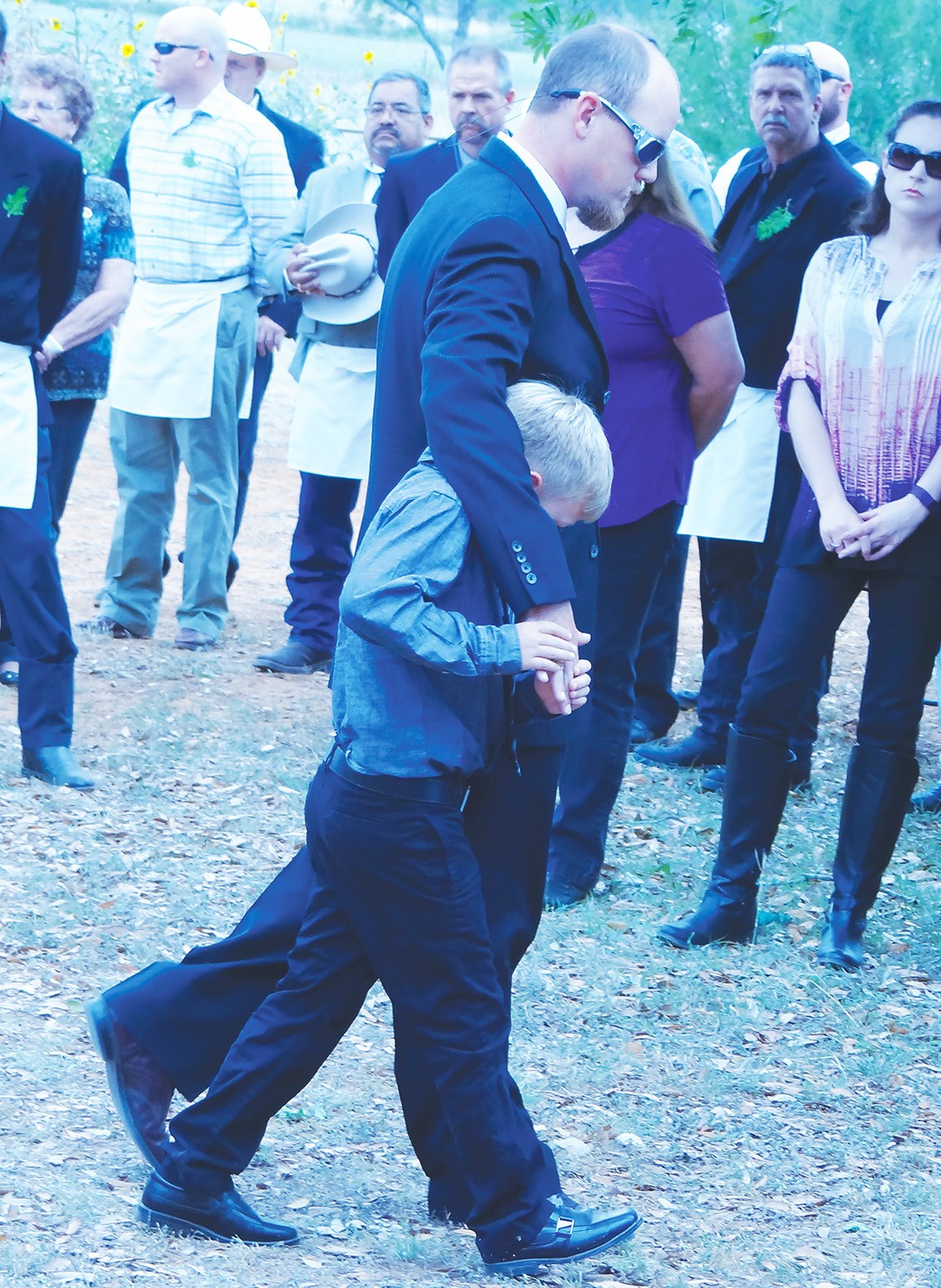 Son Charles Rutherford and grandson Corbin at the graveside services. 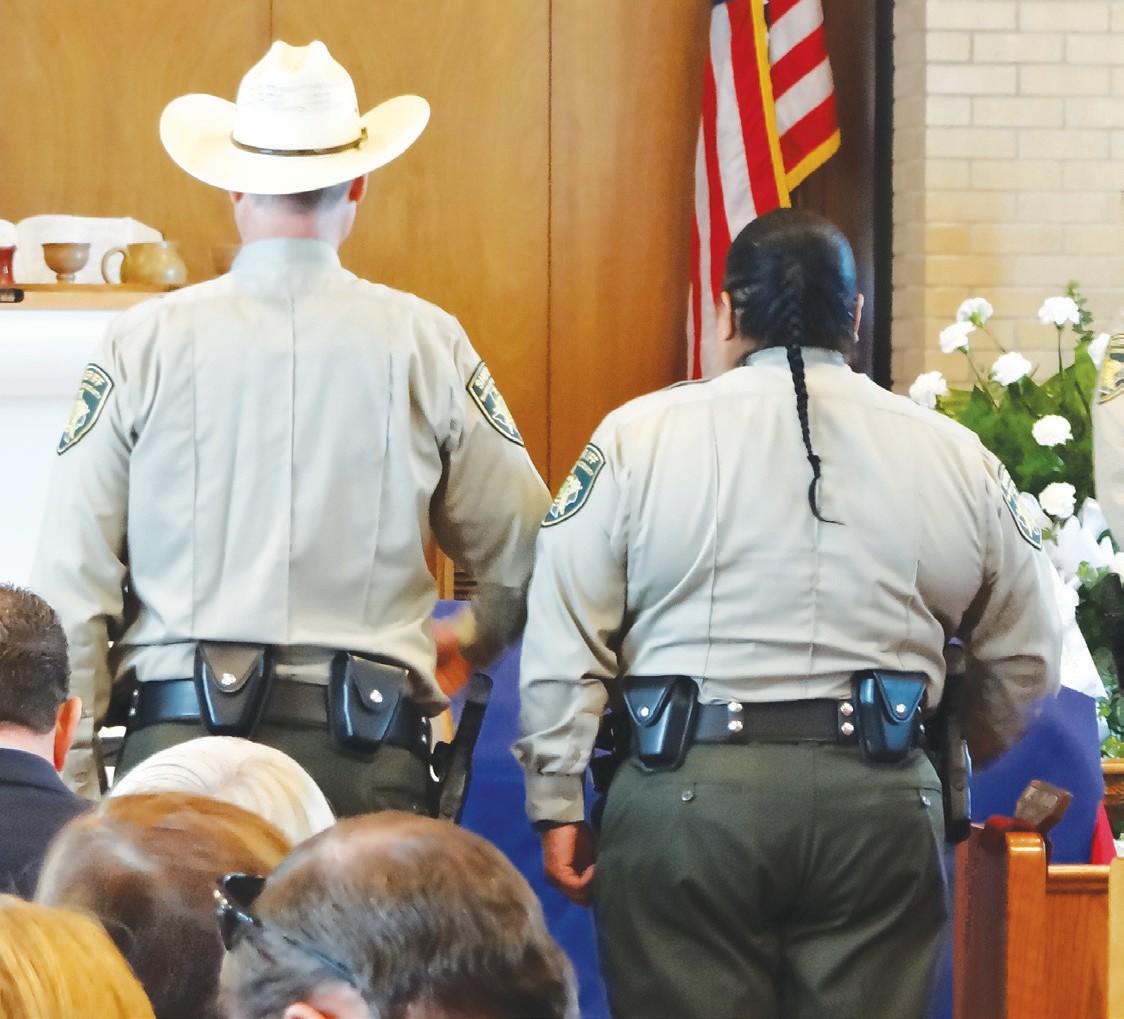 Two McMullen deputies at the casket of John Eric Rutherford. 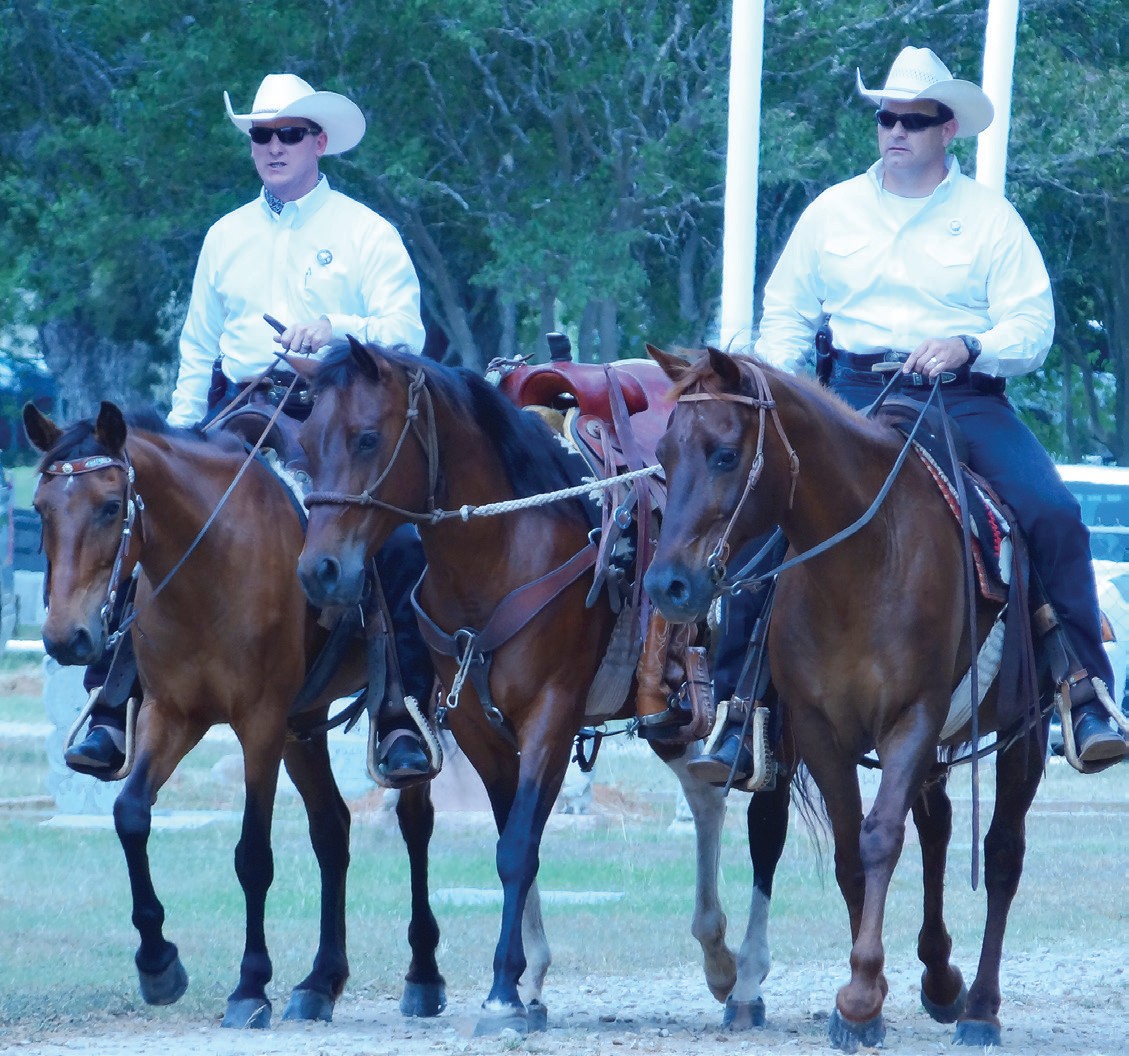 Texas Rangers Shane Staley and Terry Snyder lead John Eric’s horse Dolly, in the procession. His boots are sitting reversed in the strirrups. 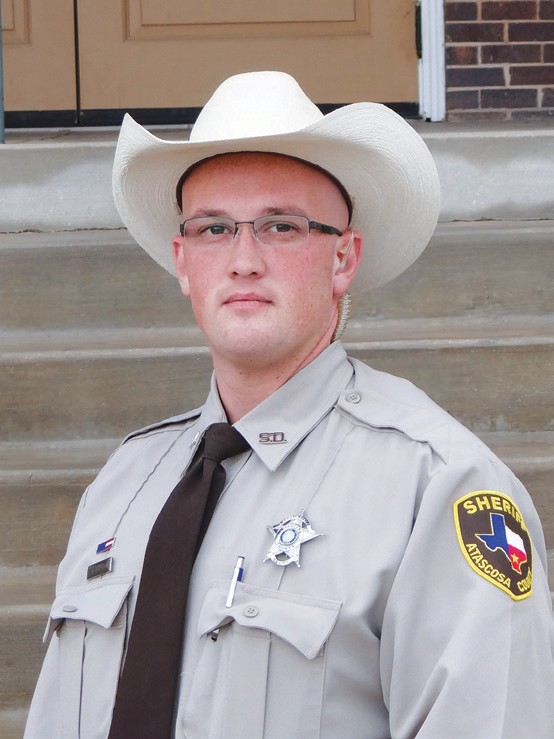 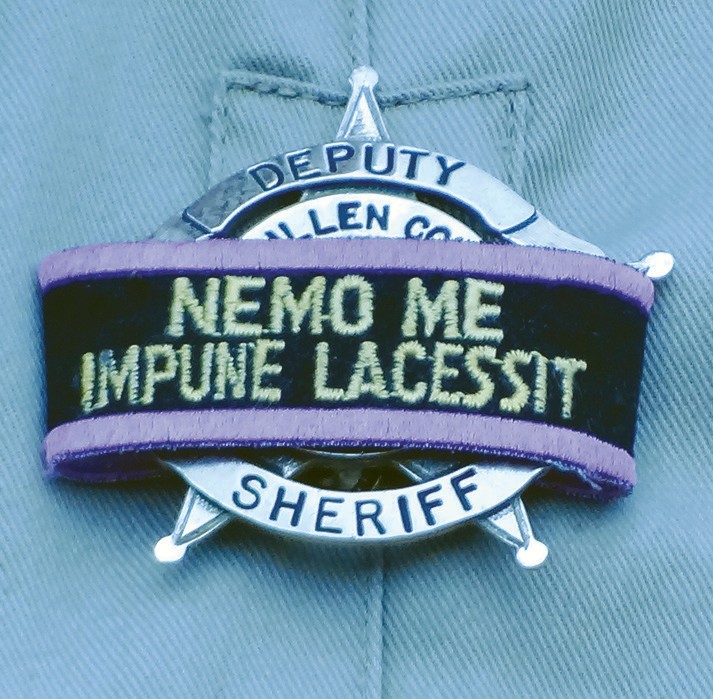